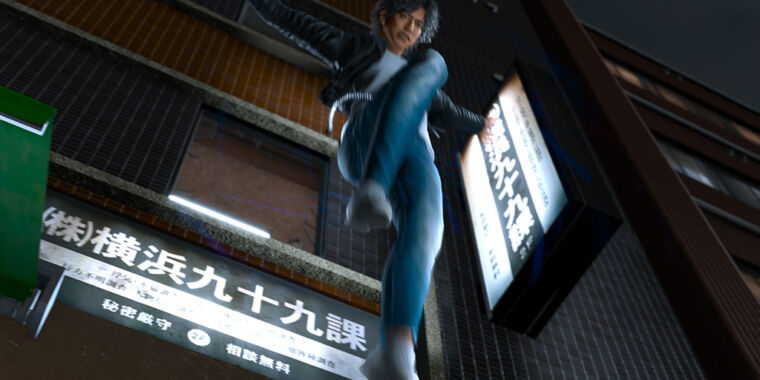 At a glance, Lost Judgment may seem intimidating to anyone who hasn’t graduated from Sega’s school of hard Yakuza knocks. To start, it’s a spinoff of Ryu Ga Gotoku Studio’s long-running crime series, which is saddled with a truckload of backstory. On top of that, it’s a direct follow-up to 2019’s Judgment, the first game from that spinoff. Finally, the overwhelming, unadulterated immersion into modern Japan that Yakuza games are known for doesn’t really feel like anything else in video games.

With these eccentricities in mind, anyone not already intimately familiar with the broader Yakuza universe may feel too lost to know where to begin here, if they want to bother trying at all. Yet after spending roughly 15 hours over the past week playing through the first four chapters of this game, I can say Lost Judgment is absolutely worth your time, with a barrier to entry much lower than you’d expect. Stacked up against any recent high-production action games, it’s unlike anything else you’ll play this year.

Following in the footsteps of every Yakuza that has come before it, Lost Judgment can’t be pigeonholed into one genre easily. Is it a bareknuckle 3D brawler? An action RPG exploding with side quests? An open-world playground of ridiculous mini-game distractions? An immersive “virtual Japan” simulator? A gripping, complex underworld melodrama worthy of prestige cable? The answer to all of these is unapologetically yes, yes, and yes.

The resulting cocktail plays like a successor to 1999’s classic Dreamcast martial arts adventure, Shenmue, shaken up with Judgment’s mix of unique ingredients. But rather than dousing players in the blood oaths and inter-family political coups of Yakuza proper, Lost Judgment picks up in a mostly self-contained story where its predecessor left off. The game trades long-held gangsterisms for a detective’s mindset. And as much as I love the originals, that’s a very engrossing twist on their formula.

This game opens on a brutal scene seemingly unrelated to protagonist Takayuki Yagami, a lawyer-turned-private investigator in Tokyo. A pair of firefighters are responding to red smoke billowing from the windows of a derelict warehouse in Isezaki Ijincho, a waterfront neighborhood in Yokohama. Inside, a series of lit emergency flares have been carefully laid out on the building’s floor, forming an arrow that points to a filthy tarp thrown over something large.

Clearly nothing good can come of this, and sure enough, nothing does. When the responders remove the covering, they’re greeted with the horrific sight of a maggot-ridden, decaying corpse of a man tied to a chair, choked in a black swarm of flies. End scene.

A second major event central to the game’s mystery is equally troubling. Early on, an active-duty police officer, Akihiro Ehara, is arrested for groping a woman on a train bound for Shinjuku. Caught by a crowd on the station platform, he makes a scene while resisting capture, and given his occupation, the scandal makes national news. But something unexpected happens when Ehara appears in court for his sentencing.

A guilty verdict reached, the disgraced cop uses the opportunity to reveal information about the Yokohama corpse, giving details not even the police have uncovered. Further complicating matters, Ehara is being defended by two of Yagami’s former colleagues from his old law office, though neither can explain his motive or sudden enigmatic change. From here, Yagami is brought to Yokohama, where he’s dragged into an increasingly intricate web of intrigue I won’t spoil. Let’s just say, players will end up in some pretty unorthodox situations even for a detective story. I will also say that you should be prepared to settle in here, because there is a lot of dialogue. This game takes its script very seriously, and RGG Studio’s writing fires on all cylinders.

Just an ordinary detective… with a skateboard

Though Japan’s courts and judicial system are thematic narrative pillars, Lost Judgment’s interactive bread and butter is in old-fashioned gumshoeing. On the morning the corpse is found, the impossibly fashionable Yagami is in Tokyo doing just that, tracking a person of interest for a client in the Kamurocho district. This criminal hotbed (a stand-in for Shinjuku’s actual red light district, Kabukicho) is well-trodden ground for Yakuza, having appeared in most entries including Judgment. Here, the city eases you into basic sleuthing.

In the ensuing half-hour distillation (the last time you’ll be in Kamurocho for quite a while), you get a nice encapsulation of most of the detective hallmarks from the previous game, and then some. As Yagami shadows his subject, you move through elementary concepts like tailing suspects, combing designated areas for clues, running down perps in high-speed, on-foot chases, and capturing photo evidence in a comically Pokemon Snap-esque mini-game complete with requisite framing-and-extra-criteria “score” boosts. (Later you’re able to don disguises as well, but don’t expect anything like Hitman, where you can just wander around dressed like a chicken.)

A few new, if simple, systems are added into the mix, too. Should Yagami need to find a way into off-limits buildings, he can now use his parkour skills to clamber up pipes, run across walls, or vault over gaps in exploration sections. Trespassing in hostile territory similarly instigates a stealth mode, with the crouching, coin-throwing detective adding the tiniest touch of Metal Gear Solid’s evasive action to what would start and end in Yakuza with a throwdown.

Though the thrust of these investigative “puzzle” segments is hardly the brainy stuff of, say, Phoenix Wright or the Professor Layton series, that’s not the point. RGG Studio has done an absolutely bang-up job of taking pains to always break up the tenor of Lost Judgment’s moment-to-moment flow, which can jump from conversationally questioning witnesses to beating the tar out of a room of delinquent punks at the drop of a hat. The game often does just that when you’re not left to your own devices touring Ijincho on a skateboard.

(And, yes, you read that correctly. Yagami is a skateboarding detective. Could he be any cooler?)