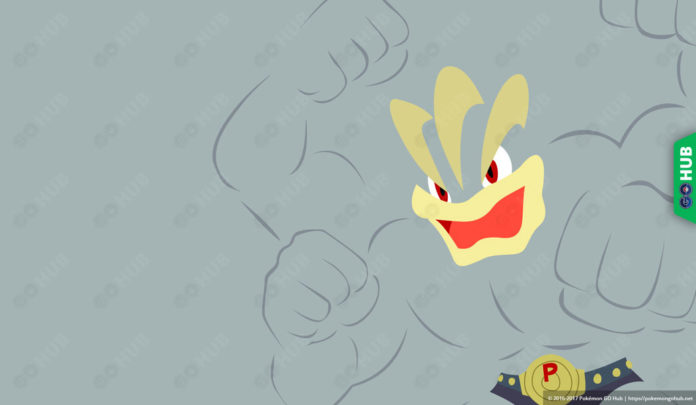 
After 6 generations of Pokémon, finally, Machamp gets a meta analysis ahead of community day this month.

Machamp has been, and will likely always be a really good pick for everything Pokémon Go. Its great for taking down gyms, its great for many raid bosses and legendary raid bosses, and is also a very solid pick in all Go Battle league tiers.

January community day features Machop with the highly coveted bonus of TRIPLE stardust. If you evolved a Machoke during community day, then you received a Machamp with the charge move Payback, a very power Dark type move. This offers awesome neutral damage and coverage against pesky Ghost and Psychic types that give Machamp trouble in battles.

The only other fighting type that gives Machamp a run for its money, is Conkeldurr. However, in terms of movepool, Machamp has the better coverage.

Lets take a close look at Machamp and its usefulness in Pokemon Go.

These stats clearly show that Machamp is a force to be reckoned with very good attack and solid defensive stats.

Again, while Conkeldurr has better stats, Machamp has access to a much better moveset, which we will touch on below. After 6 generations, Machamp is still the most relevant Fighting type Pokémon.

Machamp can learn these moves in Pokémon Go:

I think this is the longest list of moves I’ve made for a guide for one Pokemon to date. Obviously, you have a lot of options and this makes Machamp fairly versatile.

In most, if not all cases, you will always run counter for your fast move, but Bullet Punch is also a decent choice for niche play. Karate Chop technically has the best energy gain, but Counter is just more efficient (offers more damage than the energy gained from Karate Chop).

Now lets talk about those charge moves. As you can see, Machamp has access to a lot of different Fighting type attacks. The best being Close combat for damage and Cross Chop for shield baiting in PVP and Dynamic Punch being the best in raid and gym battles. Absolutely do not use Submission.

It also has access to the best Rock type attacks in the game, Stone Edge and Rock Slide. Stone Edge will cost you an elite charge TM if you don’t have one with the legacy move. Rock Slide is better in PvE and is the preferred move in PvP as well. Stone Edge is technically stronger in PvP, but requires more energy.

Heavy Slam is an okay Steel type move, but is not a common pick. It does provide coverage for fairy types, but you aren’t likely to survive long enough to use it in PvP. There are better steel types if you need a strong steel for PvE.

Finally, Machamp is learning Payback this month during community day, a new move and now the strongest Dark type attack. This will likely upset some metas in PvP and could also potentially be decent in PvE (depending on the specific Pokémon you battle) as there are not a lot of strong dark types for raiding, other than Tyranitar. Payback will be extra useful in gym battles as people often put in psychics to counter Machamp specifically. Now you have a super-effective move to delete those psychic types in red and yellow gyms.

What is the best moveset for Machamp?

The best moveset will depend on whether you are battling gyms, raids, or other trainers. It will be up to you to pick a moveset that works best for your playstyle, but you can see the most common below based on play mode.

In meta where powerful Dark, Steel, Rock, and Ice type Pokémon are frequently in raids, Machamp is often a very common pick in raid battles. Its actually number 1 for many legendaries and you likely have some Machamp already leveled because of it. If you are new, then you had the perfect chance to create a Payback Machamp without having to use an elite charge TM on one you already powered up. It will likely remain relevant for all future releases, unless changes are made to attacks. Fighting is a very effective offensive typing, especially since dark, steel, and rock Pokémon are typically very tanky.

Normal types dominate the gym battle scene, like Chansey and Snorlax. Therefore, Machamp has always been a common Pokémon to use in order to quickly take down opposing gyms. With the introduction of Payback, Machamp can take out the pesky Psychic types that resist Machamp quickly as well, making gym battles that much easier.

If you do not have a powered up Machamp, then we would highly recommend you take advantage of the January community day to make one. Trade with a friend to make the powering up and evolution a lot cheaper. Given its moveset and typing, Machamp is extremely useful and verstile in the PvE game play.

Machamp does very well in great league. Its really good against common defensive tanks including Umbreon, Bastiodon, Steelix, Snorlax, Galarian Stunfisk, and even Alolan Marowak. It has an impressive 73.1% win rate for its shadow and regular form. This is for the 1 shield scenario. Shadow Machamp is ranked #14 in open great league. 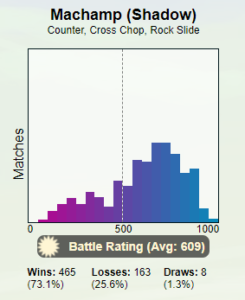 The introduction of Payback actually lowers its win rate to 69.5% when paired with Cross Chop and down to 59.4% with Rock Slide and Payback.

The best moveset remains to be Counter, Cross Chop, and Rock Slide according to the win rate metric by pvpoke.com.

Machamp is a really good pick for Great League and I would encourage you to make one and look for a Machop with good PvP IVs. Top 5 PvP IVs according to IV stadium are as follows:

Machamp is another solid pick in Ultra league as well. Rocking a 72.6% win rate according to pvpoke.com in the 1 shield simulation and is ranked #44 in the open Ultra League. It’s ranked #6 in Premier Ultra League. Key wins in ultra league are against Registeel, Swampert, Melmetal, Obstagoon, Escavalier, Magnezone, and Lapras. It also will tear through some potential upcoming XL pokemon like Abomasnow, Drifblim, Dewgong, Umbreon, and Galarian Stunfisk. 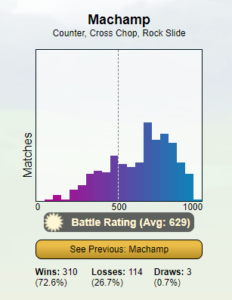 The new community move, Payback, may be more relevant in the Ultra meta and still offers a strong 69.8% win rate. Rock Slide is mainly to cover Flying type weakness, but flyers are not that common in Ultra league, so Payback may be the better choice for this league.

Look for these top 5 PvP IVs when creating your Machamp, reaching 2500 cp at around level 31:

Machamp XL has a similar role in Master league, having a win rate of 83.5% in the open Master league. Its ranked #43 in open and #20 in Premier. The Shadow form is technically better, but the likelihood of having a 100% shadow is very rare and also extremely expensive. Machamp is able to win against Dragonite, Gyarados, Snorlax, Swampert, and Rhyperior, Mamoswine, Excadrill, and Magnezone. 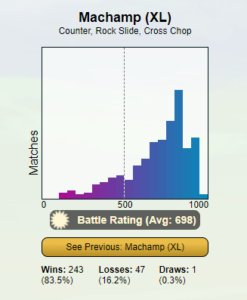 The new move, Payback, actually boosts its win rate to 86.3%. However, you lose your win match ups against Dragonite and other flying types. It will be up to your team on how you play Machamp XL because there are multiple high performing movesets in this meta. Obviously at lvl 50, you will want as close to 100% IVs as possible. Catch as many Machop as possible to get as much XL candy as you can.

Machamp is a beast and if you don’t already have one, then you definitely want to make one as soon as possible. You may have to make two, one with the new community day move and one with Rock Slide.

Do a lucky trade with a friend on a shiny Machop this community day and nickname it the hulk, because you will be using it in all facets of the game. Your stardust is not wasted on this big guy.