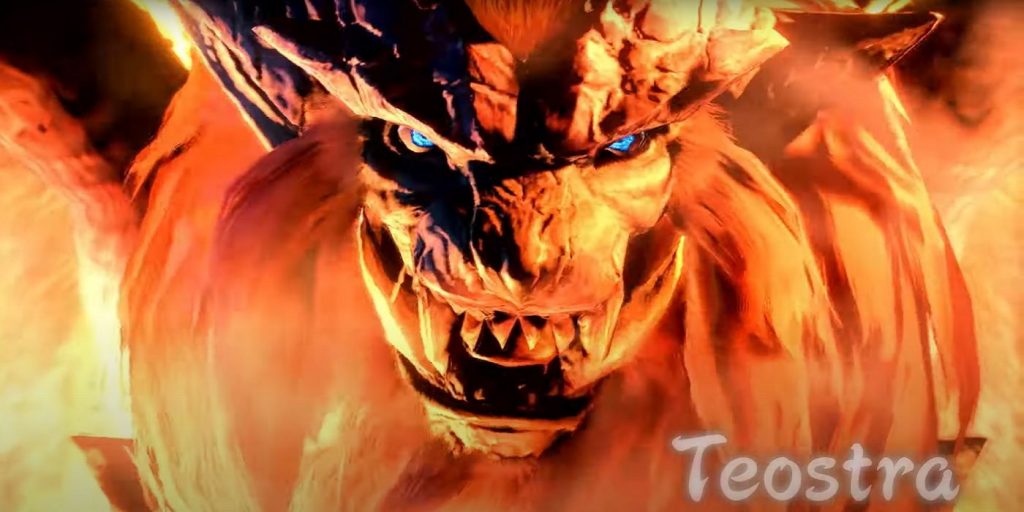 During today’s Monster Hunter digital event, Capcom released a trailer to showcase the 2.0 title update coming to Monster Hunter Rise. This trailer confirmed the reappearance of two of the series’ elder dragons.

The trailer started with quick snippets of Kushala Daora in the Frost Islands and Teostra in the Lava Caverns before revealing them officially later in the trailer. For those who may be new to the series with Monster Hunter Rise, as stated, both of these monsters are returning from past games, most recently from Monster Hunter: World. A release date was also announced. The update will be dropping tomorrow, April 28th.

Teostra is lion inspired elder dragon that makes use of fire and blast. It can breathe fire as one would expect, but can also leave dust around the battlefield that will eventually detonate and is also capable of giving the player blastblight. It’s actually a fairly similar mechanic to that of Magnamalo’s hellfire, so players who have spent time hunting Magnamalo for purple orbs will likely have a little bit of an edge going into the fight with Teostra.

Kushala Daora on the other hand is a dragon with steel skin that can manipulate the wind. This means that Kushala can summon tornados to both damage hunters and keep them away. It can also enshroud itself with wind to protect itself. In general, Kushala Daora has, in the past, been a tricky monster to fight because its difficult to approach and penetrate its various defenses.

These two elder dragons aren’t the only thing that the trailer showed off, however. The trailer did show off the previously confirmed Chameleos as well and showed a little bit of gameplay. The gameplay showed that those fighting Chameleos should be prepared to deal with its ability to turn invisible and spew poison.

In addition to the three elder dragons, the trailer also confirmed the appearance of Apex Diablos. While Apex Rathalos was previously confirmed to be appearing in this title update, the announcement of Apex Diablos was new. Along with the footage of Apex Rathalos and Diablos in rampages, footage was also shown of several Apex monsters being fought in different locales. This keyed players into the fact that now Apex monsters will be able to be fought outside of Rampages.

Monsters aren’t the only feature being added with this title update. Capcom confirmed in the event that once players unlock their hunter rank cap, a feature also being introduced in this update, they can then craft layered armor. They showed off a few options such as the Bone armor and the Tetranadon armor, but it is unclear exactly how many existing sets players can layer over their existing armor so as to get both the skills and appearance that they want.

Monster Hunter Rise is now available for the Nintendo Switch, with a PC release slated for 2022.