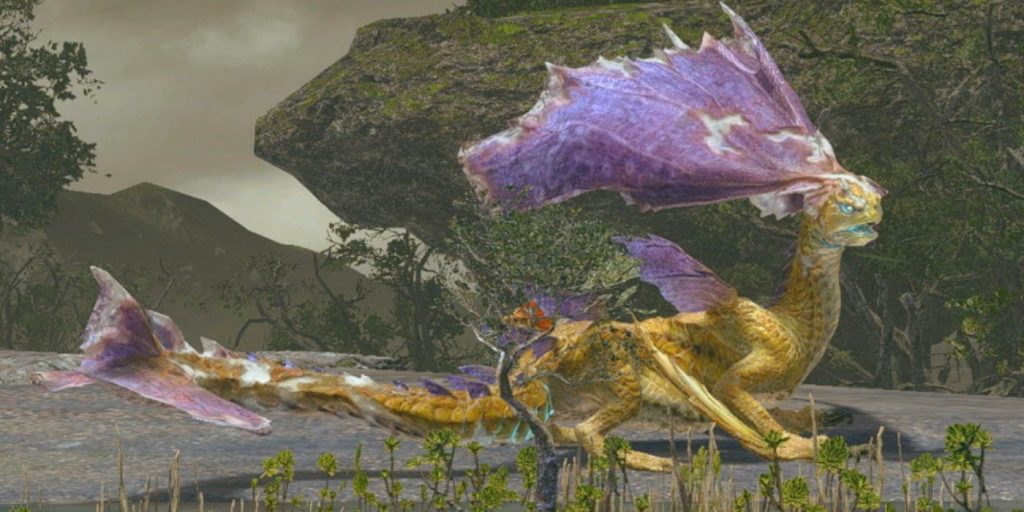 Somnacanth is a new monster to Monster Hunter Rise, and like such monsters as Nightshade Paolumu before it, will put hunters to sleep.

Somnacanth does not employ any elemental attacks, however, certain attacks, by nature of the environment Somnacanth resides in, can inflict waterblight. It likely won’t be a common occurrence, but it’s something players should know and prepare for if they deem it necessary. Weapons that rely on stamina are going to be the most affected by waterblight, those weapons being the dual blades and bow. Players afflicted with waterblight can eat a nullberry or roll repeatedly to get rid of it. Somnacanth also has one attack that while also uncommon, can inflict blastblight. Players can just repeatedly roll to get rid of this. Finally, it also has one attack that can immediately stun hunters in the vicinity. This is cured by either speccing for stun resistance or repeatedly moving the left stick and pressing buttons once stunned.

While Somnacanth does not employ any elemental attacks, it does have plenty of attacks that will put hunters to sleep. Therefore, players will want to spec for sleep resistance, bring energy drinks with them, or shore up their defenses enough to take the free hit from Somnacanth upon falling asleep. Buddies and teammates can also wake players up or stop them from falling asleep at all, by hitting them. However, if players have any level of the Flinch Free skill on their hunter, teammates or buddies cannot hit them to awaken them.

If players are bringing in an elemental weapon into the fight, it should be a fire or thunder weapon as Somnacanth resists everything else. However, if players have valid options of both elements, then thunder is the better choice. In terms of inflicting status ailments on Somnacanth, it predictably resists sleep though it is slightly susceptible to blast and thunderblight as the hunter notes gives those status effects two stars for effectiveness. Everything else is rated one star.

As for where players should hit Somnacanth for the most damage, it’s not the head for once. Everyone weapon type does the most damage to Somnacanth’s neck. That’s not to say the head isn’t a good place to aim for, it is, but the neck is a better option if there’s a choice. The tail is also a pretty good third choice. The fin on the top of Somnacanth’s head is a decent hitzone for severing and blunt weapons, but shot type weapons like bowguns don’t get much damage out of attacking it. Hitting the monster’s forelegs is yet another decent option for all weapon types.

As implied earlier, Somnacanth’s primary gimmick is its ability to put the players to sleep with a sleep powder it can expel. It uses this powder in various ways. It can breathe this powder out in front of it and cover a decent range with the beam of powder. Sometimes it will just shoot this beam out in front of it, and sometimes it will sweep with the breath attack. It doesn’t sweep twice or go in a circle like Mizutsune or Rakna-Kadaki however.

Somnacanth will also swim around on its back in a circle and release sleep powder as it does so. This is fairly easy to avoid as long as players stay outside or inside the circle Somnacanth is making. Somnacanth’s attack that triggers the hunters to call out in warning is also a sleep skill. Somnacanth will start singing with sleep powder around it. Eventually it well expel that powder in a large radius. Using wirebugs or certain silkbind skills are going to be players’ best bets at avoiding this.

If players are put to sleep by Somnacanth, it’s not uncommon to see it approach them with a shell it will then crack, causing a damaging explosion and giving players blastblight. That’s not the only shell Somnacanth will use however. It can also pull out a white shell that will create a bright explosion when cracked which will stun players that are too close to Somnacanth. Its range is not as wide as the fruit Bishaten uses to stun hunters though.

Somnacanth’s physical attacks generally consist of swimming towards players rapidly in an attempt to knock them over or jumping from the water in order to slam down on hunters. It’s fairly clear who Somnacanth will be targeting with these moves and generally just not being in front of the monster will help. Somnacanth sometimes throw spines out in front of it that don’t deal a ton of damage, but can interrupt hunters. The game’s hunter notes also inform players that if they can force Somnacanth to land, perhaps with a stinkmink, then its mobility will be impaired.

Monster Hunter Rise is now available for the Nintendo Switch with a PC release slated for 2022.