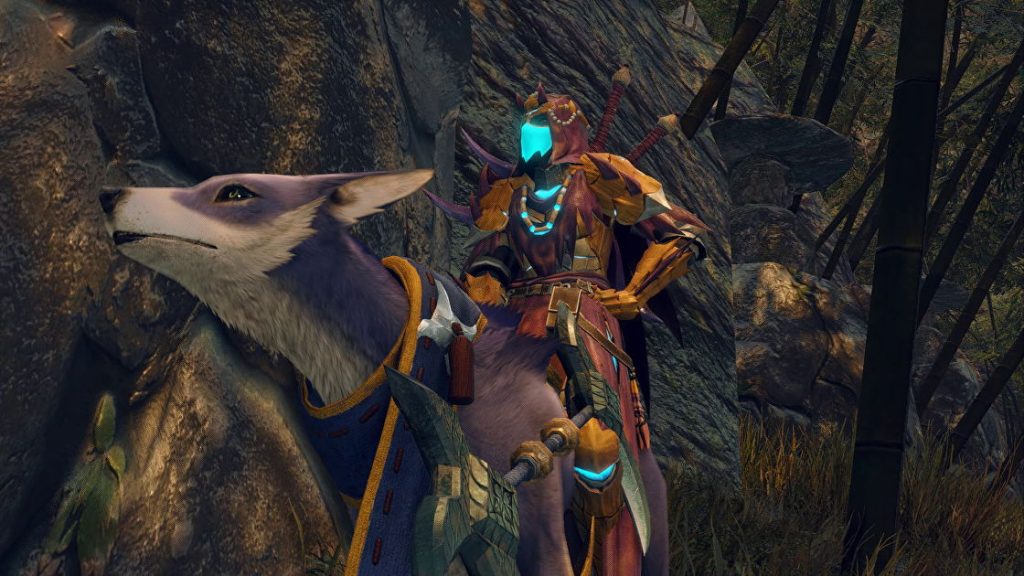 Despite having sunk several hours into Monster Hunter Rise on my Nintendo Switch this year, I cannot tell you how excited I am to play the upcoming PC version. While my relationship with the previous game in the series, Monster Hunter: World, has been somewhat tainted by excessive hours of benchmarking, the Monster Hunter series has always been a sight to behold on PC, and Rise looks set to be no different – especially now I’ve had a chance to play the upcoming PC demo ahead of its release on Steam tomorrow, October 13th.

In an early version provided by Capcom, the Monster Hunter Rise PC demo lets you tackle three of the series most iconic beasties. For ‘beginners’, there’s the Great Izuchi, a vicious raptor-like monster with a very sharp scythe tail. Meanwhile, for ‘intermediate’ hunters, there’s the Mizutsune, a feisty and ferocious dragon that can fire stamina-crippling bubbles and water beams. Finally, for ‘advanced’ players, there’s the game’s signature monster, the Magnamalo, a giant armoured brutus who spits hellfire and death at every opportunity.

There are also two tutorials – one for teaching you basic combat and another on how to use the game’s newest feature, the wire bugs and their nifty Ironsilk abilities, which let you mount these monsters in battle to deal out some mega hit points. I’d recommend doing both even if you’ve played a Monster Hunter game before, as I naively ploughed straight into the main missions thinking my Switch-honed muscle memory would be enough to carry me through, much to my own detriment. As it turns out, playing on an Xbox controller is rather different to playing with Nintendo’s Joy Cons.

Part of the reason Rise is so well suited to a controller is because of those aforementioned wire bugs. As I’ve written about before, these little insect pals are what give the game its name, letting you soar into the sky with a squeeze of the left and right triggers, and they’re just so much easier to aim and deploy than playing on a mouse and keyboard. It’s not just monster mounting they’re good for, either. They’re also critical to traversing Rise’s huge environments. Like World, Rise’s maps are single, large play spaces, which you can see in full in the bottom left corner of the screen. At first glance, they might look like they lack the vertiginous highs of World, but within the towering bamboo forests and dilapidated temple buildings of the demo’s Shrine Ruins area lies a surprisingly dense map that’s full of secrets to uncover – and it’s the wire bugs that will help you seek them out.

You start off with two wire bugs in your inventory, but more can be found out in the wild if you know where to look. Aim a wirebug into the sky and you can run up walls, jump over large obstacles, and – if you find a Great Wire Bug out in the field – sometimes scale huge cliffs and waterfalls, allowing you to reach new areas much faster than riding on the back of your dog pal Palamute. They’re very handy creatures to have, and for me felt like a much more natural extension of Rise’s game pad controls than the slightly fiddly mouse and keyboard.

Still, whatever control scheme you eventually settle on, there’s no denying that the action in Monster Hunter Rise has never looked better. Despite being limited to playing at 1920×1080 on a 15.6in laptop screen (the early access version of the demo always crashed instantly to desktop whenever I tried to load it on my proper PC), the increase in texture detail and uncapped frame rate offers an immediate improvement over its Switch counterpart, making it well worth a second visit for curious Nintendo veterans. It now looks and feels every bit as sharp as the edge of my beloved dual blades, and I’m looking forward to seeing what its 4K support brings to the table once the demo launches properly tomorrow.

As with World, monster brawls are lengthy affairs that will see you tussling with your massive foes for upwards of 10-15 minutes at a time, often moving between areas as they flee and try to escape your clutches. You may take them down faster if you team up with friends – the demo supports solo and multiplayer outings – but I’ve always found they’re perfectly manageable, if still challenging, going it alone. Thankfully, there have been some welcome bits of streamlining introduced since World, as monsters now appear automatically on the map, first as question marks and then as small pieces of artwork once you’ve taken them done for the first time. While some may argue this lessens the thrill of the initial hunt, I for one am very much in favour of knowing exactly where I need to go rather than spending ages nosing around in the undergrowth looking for tracks and signs of life.

If anything, I think this extra knowledge and visibility of your foes lets you plan a mission much more effectively. If you know where your ultimate goal is, you can plan a route and do some extra foraging along the way without feeling like you’re running round in circles. Sure, those extra mushrooms, bugs, bones and broken off monster materials won’t be of much use to you in the demo – your homeworld hub of Kamura Village is off-limits in this early slice – but it still gives you a good sense of how missions will play out in the final game.

And yes, while it’s a shame this demo cuts off with the felling of each of its three monsters, depriving us of some delicious, high-res dango action in the village canteen area in the process, it’s definitely whet my appetite for the full and final PC release on January 12th 2022. It might have begun life as a handheld game, but rest assured, Rise is as much a full-blooded blockbuster as Monster Hunter: World was before it, and the Steam demo is well worth a look if you want a slice of the action early.