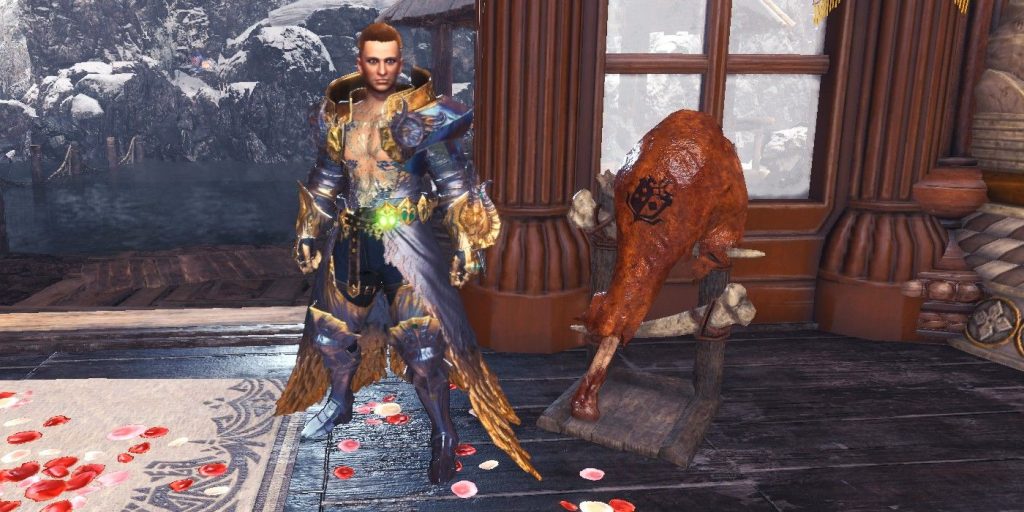 The Juicy Well-done Hammer is certainly one of Monster Hunter World: Iceborne’s more unique weapons; almost a callback to past games’ weapons.

The Juicy Well-done Hammer is a late game weapon in Monster Hunter World: Iceborne that is quite unlike any other weapon. The Monster Hunter series has often had a reputation for some pretty outlandish and unique weapons, but for the most part the weapons in Monster Hunter World: Iceborne were fairly seriously designed. A few of the more silly designs were added into the game post launch and the Well-done Hammer and its Juicy upgrade fit that bill. Here’s what plalyers need to do to get the fully upgraded form.

In order to forge the first rank of the hammer, simply entitled the “Well-done Hammer” players will need the following:

The latter three materials are materials players will likely already have. If they do not, then they can effectively kill two birds with one stone and complete the Monster Hunter World Event Quest entitled Beef is Never a Mi-Steak. The quest can reward Monster Solidbones with an 18% chance during quest completion. The goal of the hunt is to fight an Ebony Odogaron and a Glavenus. Those two monsters can provide players with the Ebony Odogaron Hardfangs and Molten Bursa, respectively. Finally, the quest also gives out a unique material, which is the Meaty Canteen Ticket.

There is a 100% chance of getting a Meaty Canteen Ticket upon quest completion and a 12% chance of getting a second one. Therefore, unless players are lucky, they will likely need to run the quest twice to get enough tickets, potentially more than twice if they’re lacking any of the other materials. Once they have all 4 sets of materials however, they can go to the workshop and forge a Well-done Hammer.

The Well-done Hammer is just the first tier for the weapon however, and it can be upgraded to become a Juicy Well-done Hammer. In order to upgrade the hammer, players will need:

Players will potentially need to run the Beef is Never a Mi-Steak quest again if they need another Meaty Canteen Ticket, but will have to head to the Guiding Lands to get the rest of the materials if they are needed.

The Afflicted Frenzy Bones on the other hand, are found in the Rotted region of the Guiding Lands. They have the same rate of appearance as the Slumbering Greatbones: 15% at a level one bone pile, and 43% at a level 2 bonepile.

Once all the required materials are gathered, head to the workshop again and upgrade the hammer to the final tier. The Juicy Well-done Hammer has an attack of 1612, 210 fire element, blue sharpness, and a level 3 decoration slot. It also provides an additional 30 defense to the hunter.

Monster Hunter World: Iceborne is now available on PC, PS4, and Xbox One.