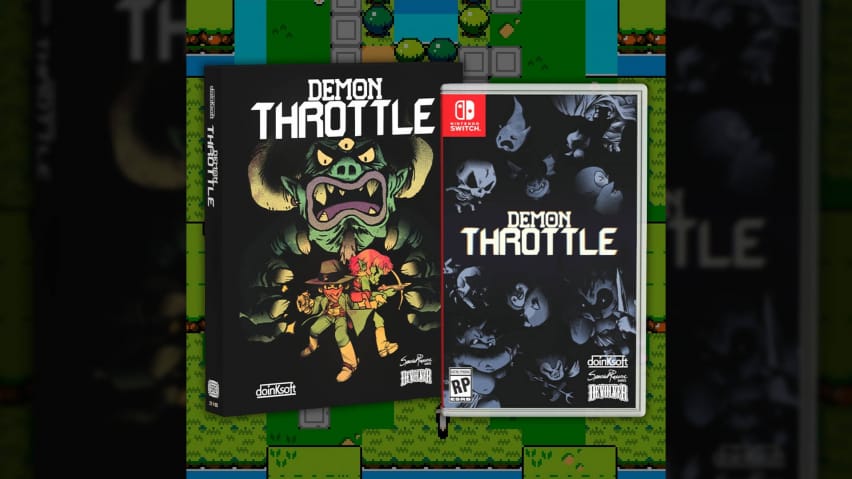 A new Devolver Digital game has been “leaked” in advance of its upcoming Devolver MaxPass+ E3 2021 event — get ready for Demon Throttle, a new game developed by Gato Roboto developer Doinksoft.

The existence of this game was “leaked” by notable gaming industry tweeter @Wario64 who claimed that he received the image in a fax in a tweet with the hashtag #sponsoredleak. I’m sure that some gamers have long suspected that studios have deliberately leaked information to build up hype, but this might be the very first time that I’ve ever seen a sponsored leak.

What is the New Devolver Digital Game Demon Throttle?

Demon Throttle is a new game for the Nintendo Switch that’s been developed by Doinksoft, the same people who created Gato Roboto and got it published by Devolver Digital.

Judging by the cover, it looks like a masked man and an orc with a crossbow will fight a bunch of monsters. An apparent screenshot from the game in the background shows a pixelated map, implying that this game might be from a top-down perspective. Aside from that, there’s one more important detail in the sponsored leak:

“Devolver accidentally faxed me this image with the file name ‘physicalonlygame.srg’ and begged me not to tweet it. #sponsoredleak” read the tweet from @Wario64.

Considering the inclusion of the filename “physicalonlygame.srg,” it appears this will be a physical only product, possibly even exclusive to Nintendo Switch. At this time, it’s unclear if it will ever get a release on other platforms at a later date.

Demon Throttle will likely be one of the five new games announced at the upcoming Devolver MaxPass+ event taking place this Saturday when E3 2021 kicks off proper; Doinksoft was mentioned as one of the developers who would be debuting a new game alongside new titles from Shadow Warrior developer Flying Wild Hog and Rapture Rejects developer Galvanic Games.

Whatever this weird thing is, odds are we’ll have to wait to find out more until the Devolver MaxPass+ presentation this Saturday. You’ll be able to pick up your copy of Demon Throttle over at Special Reserve Games at some point in the future.

If you want to check out more of TechRaptor’s E3 2021 and related summer event coverage check out https://techraptor.net/topic/e3-2021.

What do you think Demon Throttle will be all about? Do you prefer to own physical or digital games? Let us know in the comments below!