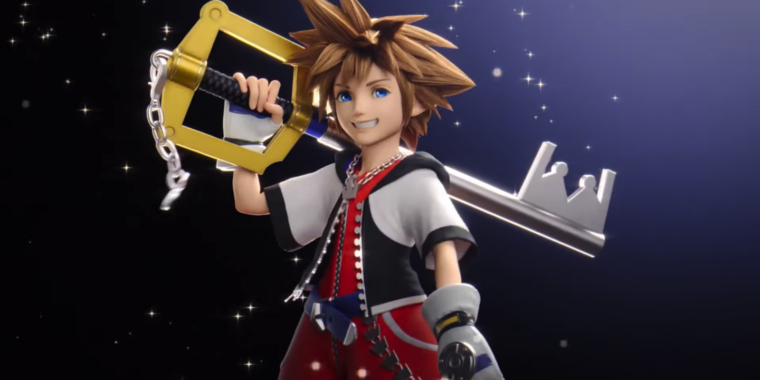 Super Smash Bros. Ultimate came out with a bang Tuesday, with Nintendo revealing that Kingdom Hearts‘ Sora will be the final addition to the game’s substantial roster of fighters—and that the fan-favorite Square Enix-Disney action RPG mashup is coming to the Switch via cloud gaming.

Announced in a final showcase hosted by director Masahiro Sakurai, Ultimate‘s Challenger Pack 11 DLC will feature Kingdom Hearts‘ hero, the twelfth new DLC fighter since Super Mario’s Piranha Plant was added in January 2019. Sora employs his signature weapon, the Keyblade, as well as elemental magic attacks and will be available for download later this month.

If you’re unfamiliar with Kingdom Hearts, picture a Ready Player One-style crossover between Final Fantasy and Disney characters—who come from their own individual “worlds” themed around their respective movies or cartoons, like Toy Story, Nightmare Before Christmas, and Pirates of the Caribbean—which Sora and his friends visit. (2002’s original Kingdom Hearts launched a year before the company, then known as Squaresoft, merged with Enix, so the latter’s Dragon Quest series has never been added to the universe.)

In a nice nod for fans, Sora’s alternate costumes are all based on his various outfits from across a number of Kingdom Hearts games, including one from the Steamboat Willie world in 2006’s Kingdom Hearts II, inspired by Disney’s 1928 short where Mickey Mouse made his debut. Nine music tracks and a new themed stage from the series will also be added as part of the Challenger Pack’s DLC.

During the stream, Sakurai said adding Sora to Ultimate‘s fighter lineup is the result of a collaboration going back all the way to the release of Super Smash Bros. for the 3DS and Wii U in 2014. At the time, Nintendo ran a poll asking fans which characters they would most like to see added to the game, with Sora coming in as the most requested character. Sakurai said he discussed the poll’s results with former Nintendo head Satoru Iwata, who died in 2015—the ever-considerate Iwata appeared to ask the director not to reveal the other top characters to avoid putting any company in an awkward position with fans.

“While this ballot was happening, we spoke with Mr. Iwata, who was still with us then, and we decided not to reveal the results,” Sakurai said. “For fighters at the top of the list, we thought that some people might demand them from the respective companies. We believed that this would cause some inconvenience to many parties. We’re sorry that we could not reveal the results.”

Sakurai also revealed that the Kingdom Hearts series is coming to Switch via cloud gaming, allowing players to experience Kingdom Hearts HD 1.5 + 2.5 ReMIX, Kingdom Hearts HD 2.8 Final Chapter Prologue, and Kingdom Hearts 3, joining the platform’s only previous series entry, 2020’s rhythm game Kingdom Hearts: Melody of Memory. Aside from the mainline trilogy entries, these releases also include spinoffs and supplemental material, though newcomers should be aware that the series’ plot lines get as convoluted as their collection titles suggest. No launch dates were announced.

Three final Mii Fighter costumes will be available the same day as the Challenger Pack, including Doom‘s Doom Slayer and Splatoon‘s Octoling and Judd the cat, which will cost $0.75 each. Rounding out the stream, Sakurai announced that Final Fantasy VII‘s Sephiroth, Tekken‘s Kazuya, Pyra and Mythra from Xenoblade Chronicles 2, and Minecraft‘s Steve and Alex are all receiving Amiibo presumably sometime in 2022.

Sora will be available October 18 for owners of Ultimate‘s $30 Fighter Pass Vol. 2 or as a separate download for $5.99.