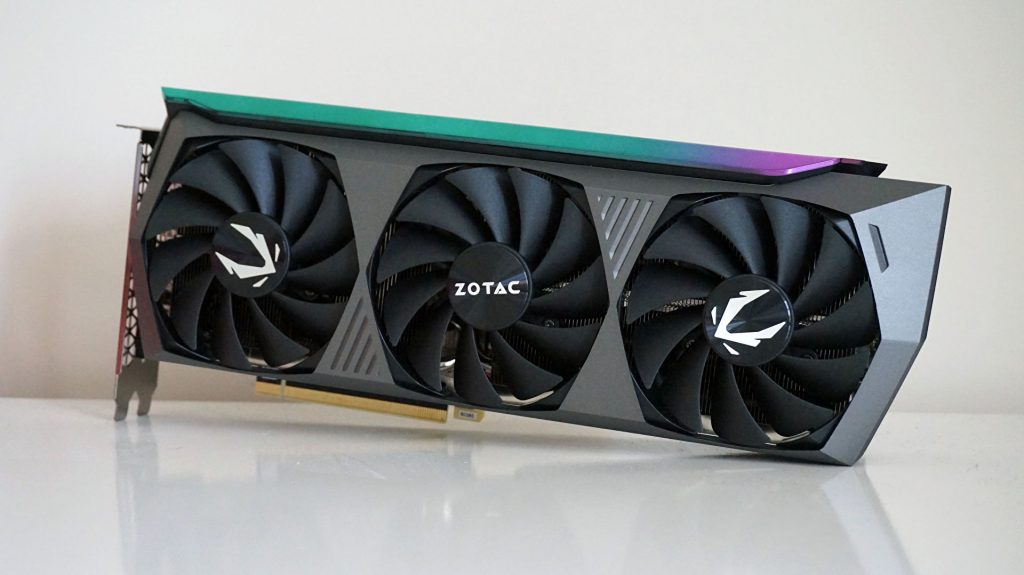 It’s been almost nine months since Nvidia kicked off their RTX 30 series with the RTX 3080, and longer still since anyone has actually been able to buy a graphics card at its normal price. Indeed, as the great graphics card shortage of 2020 rumbles on, the solution doesn’t seem to be simply making more of what’s already available out in the wild, but introducing newer, more expensive ones to stretch that GPU pool even further. Indeed, despite the RTX 3080 being plenty powerful enough for 60fps 4K gaming on max settings in pretty much every game going (and well into the 100s at 1440p and below), Nvidia now have a new flagship RTX card in town, the RTX 3080 Ti.

On paper, it’s received a sizable spec bump. Instead of 10GB of GDDR6X memory, the RTX 3080 Ti now has 12GB of the stuff. It also has substantially more CUDA cores than before, putting it closer to Nvidia’s more creator-focused RTX 3090 than its non-Ti sibling. With a GPU power of 350W, it’s a little more power hungry than the regular RTX 3080, but Nvidia still recommend having the same 750W power supply as the rest of their high-end RTX 30 family. Unfortunately, all that’s going to cost you another £400 / $400 on top of the original RTX 3080, as Nvidia have given it an eye-watering starting price of £1049 / $1199.

Whether you’ll be able to buy one at that price when it actually goes on sale tomorrow (June 3rd) remains to be seen. Chances are, you’ll have to fork out a lot more for it, if previous graphics card launches are anything to go by, and judging by my benchmark figures, it’s simply not worth it.

My card also ran incredibly loudly under load, too, even when the actual card temperature wasn’t that hot. I have a feeling this issue isn’t exclusive to Zotac’s AMP Holo edition, though, as our friends at Digital Foundry reported similar findings with Nvidia’s Founders Edition of the RTX 3080 Ti as well, putting yet another black mark against it compared to its considerably quieter vanilla RTX 3080 sibling.

I’m also aware that my testing components aren’t as ‘premium’, perhaps, as the graphics card in question. I use an Intel Core i5-10600K to give an accurate representation of what an ordinary, mid-range gaming PC might be able to achieve with these cards, but I do also test these cards with faster processors as well – and on both the RTX 3080 and RTX 3080 Ti, very little changed at 4K when I swapped out my trusty Core i5-10600K for a faster Core i9 (as is, perhaps, more befitting for a graphics card of this calibre). After all, you’re still GPU-bound at 4K, and I’ve tested enough CPUs to know it makes surprisingly little difference to your overall frame rate when playing at higher resolutions.

I should note that you’ll likely be CPU-bound by both the RTX 3080 and RTX 3080 Ti when playing at 1440p or below, as many of my 1080p results on my Core i5 were exactly the same as my 1440p scores. Equally, though, you shouldn’t really be buying either of these cards for those resolutions in the first place. There are much better, (usually) cheaper options for playing games at 1440p or below, such as the RTX 3060 or 3060 Ti, and you should only really be considering the RTX 3080 or above if you have a 4K monitor or an ultrawide one.

Fundamentally, though, even if there are marginally faster versions of the RTX 3080 Ti out there, I’m still not convinced it would be worth all that extra cash over the regular RTX 3080. Indeed, as before, the RTX 3080 Ti is more than capable of playing most games at 60fps on max settings at 4K, with a couple of the same exceptions where you’ll have to drop down to High settings to keep that 60fps frame rate. Those exceptions include a lot of the big games from last year, including Assassin’s Creed Valhalla and Cyberpunk 2077, meaning it offers little in the way of additional future-proofing against future blockbuster games, as well as perennial favourite, Total War: Three Kingdoms, so it’s not like older demanding games are suddenly going to improve loads either.

In Assassin’s Creed Valhalla, for example, I only saw an average increase of 2fps on Ultra High settings at 4K with the RTX 3080 Ti, rising from the RTX 3080’s average of 51fps in its built-in benchmark to just 53fps – which to my eyes is pretty much the same thing. Likewise, when I knocked the settings down to High, the RTX 3080 Ti only managed an average of 79fps at 4K, up from the 75fps average I got on the regular RTX 3080.

Cyberpunk 2077 was equally underwhelming on the RTX 3080 Ti as well. Whereas the RTX 3080 averaged 38fps on Ultra settings at 4K around the busy, graphics-intensive streets outside V’s apartment, the RTX 3080 Ti only bumped that average up to 42fps. I also had to play on Medium with both cards to get anywhere near 60fps at native resolution, too, with both cards returning the same average frame rate of 59fps. Cyberpunk, of course, also supports Nvidia’s DLSS tech, but ironically it was the RTX 3080 that performed better when I switched on DLSS with Ultra settings again, averaging 72fps versus the Ti’s result of 62fps. I also saw nigh-on identical frame rates between the two cards when I turned on the game’s pair of ray tracing presets as well (which has DLSS turned on by default), with both hovering around the 47fps mark.

Total War: Three Kingdoms was a similar story as well. After all, when the normal RTX 3080 is capable of playing at an average of 47fps on Ultra settings at 4K, what difference is the RTX 3080 Ti’s average of 50fps actually going to make to your moment-to-moment gameplay? I wasn’t able to tell the difference between the two cards in Forza Horizon 4, either, as both managed the same average of 139fps on Ultra settings at 4K. That’s a lot of games with little to no improvement.

Even in the games where the RTX 3080 Ti did pull ahead, you’re still paying an awful lot for what you’re actually getting. In Shadow Of The Tomb Raider, for example, the RTX 3080’s average of 58fps on Highest with its top anti-aliasing setting switched on was already more than smooth enough for my tastes, and I’m not sure the 3080 Ti’s average of 64fps is going to feel tangibly different in practice. The same goes for its ray tracing and DLSS performance, too. With its ray traced shadows on Ultra, the RTX 3080 Ti’s average of 80fps isn’t going to look or feel any different if you’ve only got a regular 60Hz 4K monitor, and even if you do have a fancy, all-singing, all-dancing high refresh rate one, my eyes simply aren’t sensitive enough to tell one from the other at these kinds of frame rates.

Sure, it was nice to play Monster Hunter: World at 4K Highest without dipping below 60fps on the RTX 3080 Ti – it averaged 65fps running around the dense undergrowth of its Ancient Forest map, mimicking the kinds of speeds I saw on the RTX 3090 – but I’m not gonna lie. I also didn’t feel like the regular RTX 3080’s average of 58fps needed a huge amount of improvement.

The same goes for Metro Exodus as well. In the game’s regular edition, the RTX 3080 was already capable of producing an excellent average of 68fps in its tough, demanding benchmark tool, as well as 61fps with Ultra ray tracing and DLSS thrown in. The RTX 3080 Ti pushed this a bit further to an average of 74fps and 66fps with ray tracing and DLSS (again, edging closer to what you’ll get on the RTX 3090), but let’s get real. That’s not worth paying at least another £400 / $400 for.

Admittedly, it’s not like RTX 3080 prices are anywhere near normal at the moment, either, and if you end up finding one for the same price as the RTX 3080 Ti, then sure, it probably goes without saying that you should go for the Ti. The real test will come when pre-built RTX 3080 Ti desktop PCs start getting priced up, because when an RTX 3080 PC will currently set you back at least £2000 at some UK retailers, you may feel that spending another couple of hundred quid to get one with a Ti isn’t that much of an extra stretch. I’ll be keeping a close eye on these when they go on sale tomorrow.

In my gut, though, I just can’t recommend anyone spend over £1000 / $1000 on a graphics card for playing games, either now or in the future – especially if you don’t have a 4K monitor. The RTX 3080 Ti is massive overkill for anyone with a 1080p or 1440p screen, and there are plenty of cards that will still get you amazing performance for a heck of a lot less. If you’ve been thinking about upgrading recently, you should look out for Nvidia’s RTX 3060 if you’ve got a 1080p screen (or an RTX 3060 Ti if you really want to push into those high refresh rates), while those after maxed out 1440p performance should consider an RTX 3070 or AMD’s Radeon RX 6700 XT. With today’s games, there’s simply no need for anything more powerful right now – especially not when Nvidia’s performance-boosting DLSS tech can often turn even an RTX 3060 into a viable 4K powerhouse in supported games.

And if you do own a 4K monitor and find your current graphics card is struggling to maintain a steady frame rate (and you aren’t satisfied with simply knocking down the resolution to 1440p), then I also feel like there are better, more appropriate cards you should be on the lookout for instead, such as the vanilla RTX 3080 for playing games at their native resolution (or indeed one of the RTX 30 cards mentioned above if it supports DLSS). Although, with prices as they are right now, you should just do yourself a favour and just turn the resolution down. It might take another six months before the great graphics card shortage resolves itself, but honestly, just think about whether you really need to upgrade right now. It’s easy to get swept up in the excitement of shiny new things, but if none of the current or future ray tracing games take your fancy, you’re almost certainly going to be better off sticking with what you’ve got for the time being. When prices return to normal (and assuming there hasn’t been another entire generation of graphics cards announced in the interim), the vanilla RTX 3080 will be the much better buy for 4K gamers in the long run.