Our detailed breakdown of everything Halo Infinite multiplayer related at E3 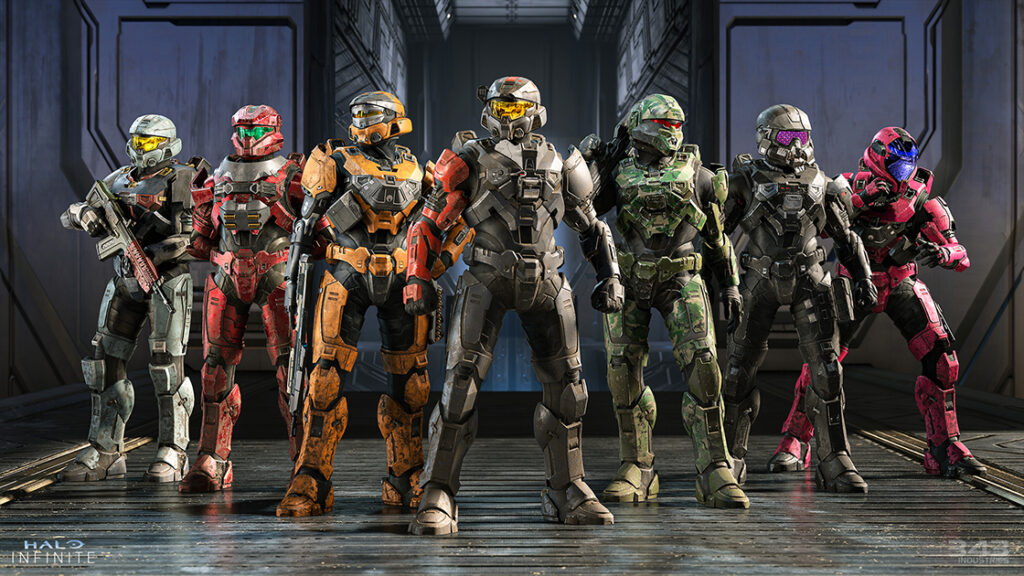 Microsoft had a lot to show at its Xbox Bethesda Games Showcase on June 13. It was a particularly meaningful day for Halo fans, as the wait for Infinite has been a long one to say the least. During the event developer 343 Industries finally showed off the multiplayer for Halo Infinite along with a short campaign trailer featuring the Chief and a familiar artificial intelligence. However, the multiplayer was definitely the star of today’s show, as there was far more new content on display in that trailer. We’ve now picked through the Halo Infinite multiplayer reveal second by second to find everything hidden in it. Here’s what we found.

The improved art style is the most immediate thing that jumps out about the game now. The last year of extra development has definitely been kind to Halo Infinite. The campaign reveal looked flat and simplistic in many regards, but the environments on display in the multiplayer trailer manage to find that balance between minimalism and meaningful details. The visual effects of explosions and weaponry also look fantastic. In many ways, it looks like a next generation version of Halo 3 with some Reach elements thrown in, which is a big complement to say the least.

The Forerunner architecture and human battlegrounds look diverse and distinguishable in contrast to the problematic Forge objects that plagued prior games (including Bungie’s). Why does this matter for multiplayer? Having a sense of placement in a map is key for getting familiar with layouts. That, and we’re going to be staring at these same locations for years on end. Flat grey textures are the last things people want to see in a universe with epic cinematography and rich lore and location settings. 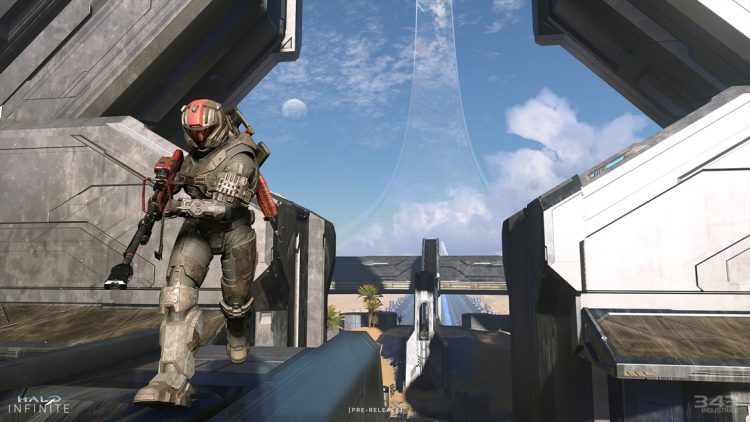 Locked and loaded with ole’ reliable and some new toys

It goes without saying that Halo fans love the guns in the franchise. Halo Infinite does well to bring back the classic weapons and the classic art styles of each. It’s respectable that 343 tried to do its own thing in different games, but sometimes it’s best not to fix something when it ain’t broke. The classic Assault Rifle, Battle Rifle, Gravity Hammer, Needler, Plasma Pistol, and more. The sniper looks decidedly different. Not everyone may go for that.

The Banished weapons are also looking a lot better now. To be fair, we only got a brief look at them last year. There’s a heavy weapon that’s heavily featured in the trailer. It fires explosive bolts that can take down vehicles and Spartans alike. Reminds me of something from Doom. 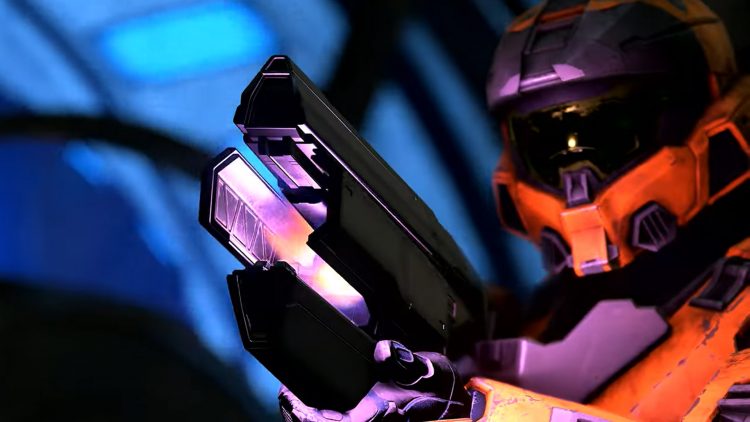 There’s also some kind of new plasma canon that 343 teased, but it doesn’t look Banished or UNSC. It could be a new Forerunner weapon, but the art style is hugely different from the Promethean weapons we’re familiar with. And that wouldn’t be a bad thing. As far as mechanics, the canon charges and then fires a cluster of plasma that can ricochet off of multiple surfaces. A successful kill will disintegrate an opponent. Sound Forerunner now?

What’s also interesting about these weapons is the fact that ordinance drops are still around. That’s likely how you’ll get your hands on some of the cooler guns in Halo Infinite multiplayer. The community has mixed feelings about ordinance drops, but this mechanic may work better this time around.

Weapon equipment is returning to multiplayer for Halo Infinite. That grappling hook you keep seeing isn’t a standard option in multiplayer. It sounds like Master Chief can use it all he wants in campaign, but the Grappleshot has limited charges in multiplayer and works like the equipment pickups from Halo 3. The trailer also showed off some other equipment players will be able to use like the Drop Wall deployable cover, Repulsor weapons fire reflector, and target acquisition Threat Sensor. We also spotted a Forerunner piece of equipment that may be something new and yet to be seen. Unfortunately, it wasn’t deployed so there’s no way of knowing what it does. 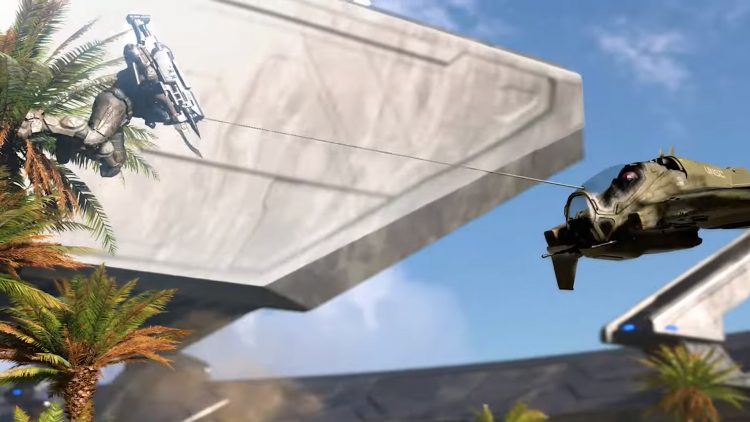 Some new, some old

343 Industries wasn’t shy about showing off all the Halo Reach and Halo 3 armor returning for Halo Infinite. It looks like most of Noble team is back. There were also plenty of Halo 5 armors that showed up again along with the new Infinite armors that look more at home in the Halo universe than the Halo 5 content. Just like previous games, players will be able to mix and match all the armor pieces they like for truly unique looks. It’s also rumored that Halo Infinite will have purchasable cosmetics since the multiplayer if free.

We may have already seen some of those cosmetics. For starters, there’s a spray of Master Chief on a wall and a particularly exotic oddball in one scene. One Spartan also had an ammo belt slung across its chest, which seems like an add-on. Another Spartan featured a green camo paint color scheme. There are also different visor options. 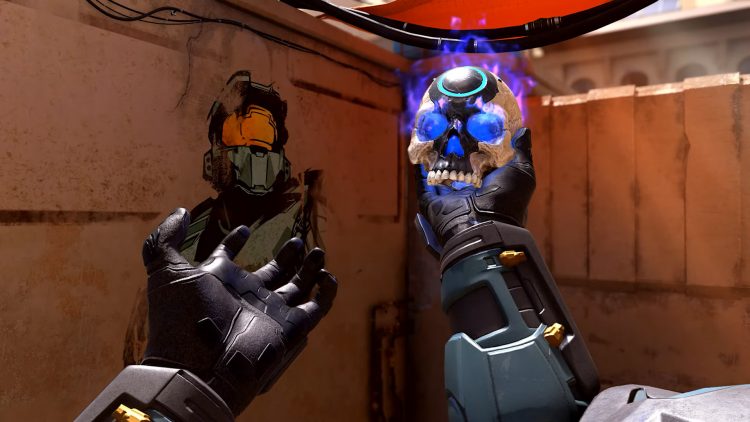 The multiplayer trailer very generously shows off the vehicles returning to Halo Infinite, and today’s news is going to get fans excited. The Brute Chopper is back. Furthermore, we got to see the Banished Ghost and Banshee, the normal and Rocket Warthog, Scorpion, Gun Goose, Wasp, and there was something called the Razorback. We’re not sure what that one is, but it apparently appeared in the trailer. There appears to be a vehicle in the background at one point that looks like a Brute Prowler, so that could be it. However, the Razorback sounds UNSC, so we’ll need to learn more. 343 also announced that vehicles will be customizable, though it didn’t explain if that means in cosmetic appearance, utility, or both. 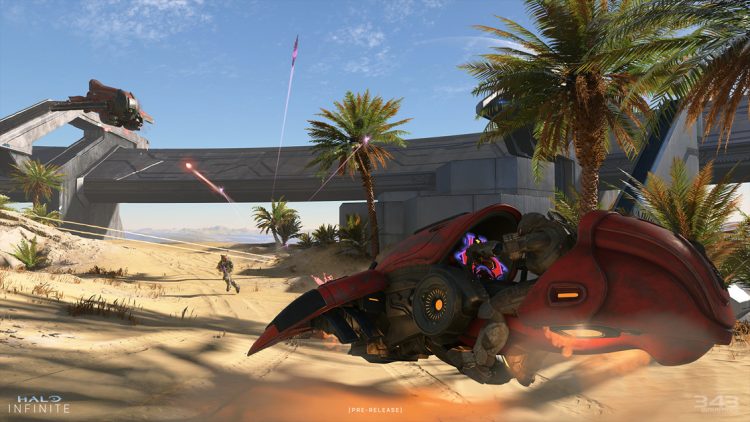 The multiplayer gameplay trailer looked smooth. 343 didn’t say what system it captured the footage on, but was probably a high-end PC, as that’s a pretty common practice by developers. However, 343 Industries did previously mention a target for 4K Arena gameplay at 120fps on Xbox Series X. It seems a decent modern PC should be able to run the game, though it sounds like Big Team Battle and other large-scale modes will be more taxing on performance.

Another big surprise is that Big Team Battle now features 12v12 combat with Ordinance drops. It sounds a little bit like the Warzone game mode from Halo 5 in that sense, but more focused. Halo Infinite will also bring a training mode to the franchise. There will be a target range, training matches with AI-controlled enemies, and even the option to add bots to custom games. Capture the flag also showed up in the trailer, which shouldn’t surprise anyone. We didn’t get much else aside from that, but we expect to learn more about modes soon.

The trailer showed off a BTB map akin to Valhalla in the trailer, but also some maps coming in standard Arena multiplayer. One mapped looked like a water processing facility, another bore similarities to Outskirts from Halo 2, another is in some kind of human power facility, and the last was on the Halo ring in a Forerunner oasis setting.

343 needs to nail the gameplay

343 Industries built Halo Infinite to be a platform for years of content, which means there’s a lot riding on the game. It needs to succeed or the franchise will likely not recover its former relevance. At least, not anytime soon.  Todays showcase sounds promising, but there’s still a lot we need to learn about the game. The campaign also remains a general mystery outside of the lackluster demo we saw last year. There may be good reason for why we haven’t seen more though.

343 said itself in a blog today that “we may not get everything exactly to everyone’s liking on day one, but as a live service we’re committed to partnering with players to evolve the game together.” That seems to suggest there’s more work to do, which is surprising given that the project has been in development for nearly six years now. Hopefully everything comes together when the game launches this holiday.

Check in tomorrow for more info on the Halo Infinite multiplayer. The developer will show off much more gameplay and offer a deep dive into the game. 343 will also follow up throughout the week with additional blog posts about the development of the game and overall franchise. There’s much more on the way and we’ll continue to cover all the details.