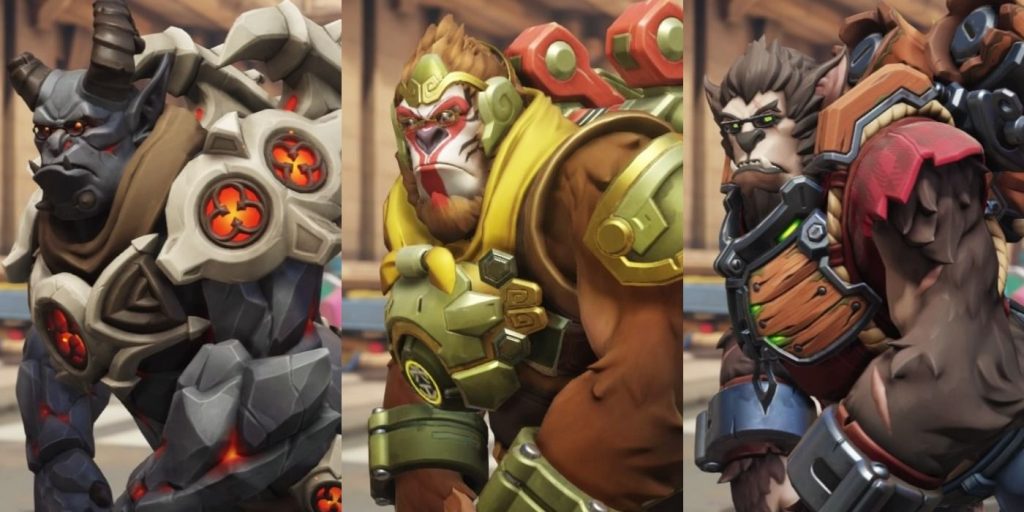 Winston is one of the original characters released during Overwatch’s launch back in 2016 and is described as both a scientist and an adventurer. His is the rallying call that begins many Overwatch matches (yes, Winston we are with you!), and he’s a dependable dive tank that’s often really helpful when your team is in a tight bind.

Whilst there might be pros and cons in playing Winston, there’s not much arguing that Winston has some great skins for you to choose from, especially if you are a fan of literature! Many of his skins draw inspiration from the Gothic, and other genres of fiction and mythology, and even more of them focus on legendary monsters.

Desert is at the start of this list mainly because, well, it’s just a bit plain. Having said that, this skin is a great compliment to the many Camo/Military-themed skins available across Overwatch characters and could be a fair choice if you’re trying to make up a matching team aesthetic.

Desert puts Winston in a camouflage-styled suit, with accent points detailed in blue. As an Epic level skin for Winston, this skin will cost you 250 gold and is available for purchase year-round.

After Desert comes this wonderfully bright lore-based skin for Winston, named after the Lunar Colony Winston is based at. Horizon has Winston dressed in a lurid orange, his exo-suit in a dulled steel grey.

This skin has some nice little details — the scorch marks on his energy pack, the bright yellow rivets — but it sadly pales in comparison to some of Winston’s more elaborate skins. As a base-level skin, this Epic skin will cost you 250 gold to unlock.

Another of Winston’s lore-based skins, Specimen 28 has Winston dressed in what appears to be a scientific study suit, wires plugged into several parts of our favorite Gorilla genius. This is quite a muted skin, with a color palette of soft khakis, highlighted with bright yellows, reds, and greens.

This Legendary skin was released as part of the Archives season and is therefore locked to that season as far as purchasing it, and sadly, for the price of 1,000 gold, it just seems a bit lackluster.

Frogston is a Legendary level skin, and it’s easy to see why. Sure, the color scheme is just as muted as Specimen 28 before it, but, there’s something in the little elements in Frogston that pushes it up the list. The reflective nature of Frogston’s rendering gives it a nice bump and the bright red accent points tie the whole skin together.

This is quite a subtle skin and could be good in some of the more dimly-lit maps, and would look especially good with darker skins to match with, such as the Talon-line of cosmetics. It will cost you 1,000 gold to unlock.

It’s time to go on an adventure, for riches, for treasure — but most importantly, for research! Explorer is one of two base Legendary skins that were released for Winston, dressing him up as if he was an extra from Indiana Jones, or maybe King Kong, all ready for a tour into the jungle (or outback!).

There are some cute little details in this skin, with Winston sporting what appear to be destination stamps and even carrying a pair of binoculars. As this is a base skin, you can purchase it at any time, as long as you can afford the 1,000 gold.

Safari is the second of Winston’s base Legendary ‘explorer’ skins, but this time with a wonderful pale blue accent running through the skin design. Highlight touches are added, with Winston’s mighty handlebar mustache, his binoculars recolored in silver, and small brass plates added to his energy pack.

Paired with lighter base tones of chalk white and dark brown, Safari edges ahead of Explorer in this list because you can only really take so much khaki all at once. Just the same as Explorer, Safari can be unlocked for 1,000 gold.

Let’s go for a deep dive, with your favorite dive instructor — Winston! Undersea is a bright skin choice for Winston players, fitting him out for underwater missions — complete with oxygen tanks!

Whilst it may seem simple at first glance, a second look will show just how detailed this skin is. Similar in color scheme to the lower-ranked Horizon skin, Undersea feels much more defined — whether it’s the differing textures at play in Winston’s armor or simply the blue-green gleam from his diving mask. As a Legendary-level skin, it will cost you 1,000 gold to unlock.

With this Legendary skin for Winston, it’s time to play ball. Released as part of the Summer Games season, Catcher sees Winston dressed in his baseball uniform, complete with sporty sunglasses, mitts, and the all-important game ball.

As this skin is a seasonal release, you won’t be able to purchase it out of season, but during Summer Games it’s yours for 1,000 gold. It’s a great one to pair with other sports-themed skins, especially Zenyatta’s fantastic Fastball skin.

A few years ago, Yeti could possibly have taken the crown as the best Winston skin in the game — it’s just that good. Redesigning Winston as a Yeti, his fur an icy-white, arms wrapped in ropes, shoulder plates dusted with snow, this skin is a perfect winter-themed choice for Winston players.

Yeti highlights Winston’s ability to shapeshift into a host of different animals in his cosmetics designs, some real-world, some pure fantasy — a majority, legendary ‘monsters.’ Yeti is naturally a good choice for playing on snowy levels, as Winston appears slightly camouflaged due to his white hair. As it was released in Winter Wonderland 2016, it is sadly locked to the Winter season, and it will cost you 1,000 gold to unlock in-season.

Wukong, Winston’s brilliant skin from 2017, is both a celebration of the Lunar New Year as well as a confirmation of Winston’s deep character connection to literature. Here he is as Sun Wukong, known to many as the Monkey King. Yet another legendary beast, the Monkey King comes from the 16th-century Chinese novel Journey to the West.

Winston’s gear has been repainted in green and gold, with a striking use of red on his energy pack and face. The recreation of Sun Wukong’s traditional outfit is lovingly done, making this surely one of the more instantly recognizable character skins in the game. Unfortunately, as this is a seasonal Legendary skin, you can only buy it during the Lunar New Year season, and it will cost you 1,000 gold.

There’s no denying it — Gargoyle is one of the best skins for Winston, and possibly one of the better skins in Overwatch, full-stop. Worth the price tag, Gargoyle will cost you 1,000 gold. But, beware that you can’t purchase it out-of-season.

This 2019 Anniversary skin sees Winston as a stone gargoyle come to life, his energy pack transformed to look like the stone columns of whichever building he has leapt from (Notre Dame perhaps?), a deep firey glow emanating from the cracks in his skin. It’s really nicely three-dimensional, with every aspect of Winston’s outfit considered, (stained glass shoulder pads anyone?), and it looks great paired with any of the more fantasy-based skins in Overwatch.

One of the most recent, and as this list argues, the best of Winston’s skins, is this amazing skin, added in the Halloween Terror 2020 season. As with many of the previous skins, Werewolf has Winston transformed into a classic monster of Gothic literature, in this case, the Werewolf.

Werewolf as a skin takes motifs from the contemporary imagining of werewolves that you might see on TV or in film — Winston’s dressed in a red flannel shirt and blue jeans — but it puts a bit of a Blizzard stylistic spin on it, turning his energy pack into a haunted tree root, with green glowing eyes. This is a Legendary skin and can only be bought during the Halloween season, costing you 1,000 gold, but it’s well worth the wait, if only for how good it looks when you trigger Winston’s Primal Rage.


Next
Genshin Impact: Ten Fan Theories That Make Way Too Much Sense

Emily Marlow is a non-binary writer and researcher based in Sheffield, hell-bent on making his 26-year-long devotion to Neon Genesis Evangelion worth more than just the occasional funny tweet. Holds multiple degrees from the University of Sheffield, including a Master of Biblical Studies, with a focus on Bioshock Infinite. Biases J-Hope.