Home » Palworld looks like Pokémon until you see guns and sweatshops

Palworld looks like Pokémon until you see guns and sweatshops 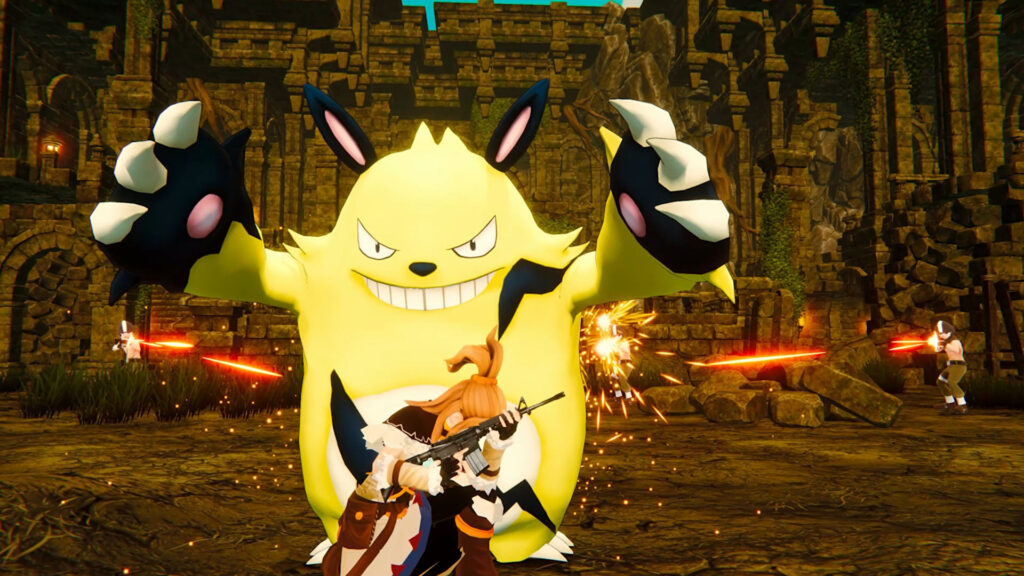 When Palworld‘s trailer starts, it looks a whole lot like a fancy 3D Pokémon. This lasts nine seconds, until you see someone hanging from the talons of their bird Pal while spraying bullets with an assault rifle. Soon, you’re seeing Pals made to work in fields, then in a sweatshop assembling new rifles. Then someone picks up their sheepy Pal to use as a shield in a gunfight. Then… it is a trailer of endless surprises, a marvel you must watch.

Developers Pocketpair describe Palworld as a multiplayer “open-world survival crafting game”. You know the score: exploring, building, fighting, crafting, and such. To help you with your tasks, you’ll be able to enlist Pals, big critters that are just Pokémon. But while Pokémon have often worked jobs alongside their human friends, Palworld sounds like a cruel extrapolated endpoint of treating Pokémon as tools.

While in Pokémon I’ll use electric-type ‘mons to help me battle critters I catch while fishing, in Palworld you can straight-up throw electric Pals into water like a toaster. And while Pokémon has often mentioned poachers, here you’re not only able to poach Pals you can kill and eat them too (though apparently that’s illegal?). However, the Steam page does clarify that labour laws don’t apply to Pals, which sure is something. And if you put them in your factories, the devs say, “They will work forever as long as they’re fed until the end of their lifetime.” Oh no.

Pocketpair also made Craftopia, a game whose trailer looked like Breath Of The Wild until you saw Pokémon, a WW1 biplane, and conveyor belts dumping whole live cows into a giant cooking pot. Though our Ed actually quite enjoyed playing Craftopia so who knows, Palworld might have weird charm too.

Watching the Craftopia trailer again, I am delighted to see how both are wholly unpredictable yet seem to follow similar beats. Just a treat to watch. Video games are amazing.

With Craftopia is still in early access, the devs have addressed concerns about what the announcement of Palworld means for their previous game. They say they’ve expanded their development team and are continuing to work on it, and recently laid out a roadmap for future additions and updates. I think I’d be leery if I had bought Craftopia.