Play this Dreamcast Castlevania game 20+ years after it was canceled 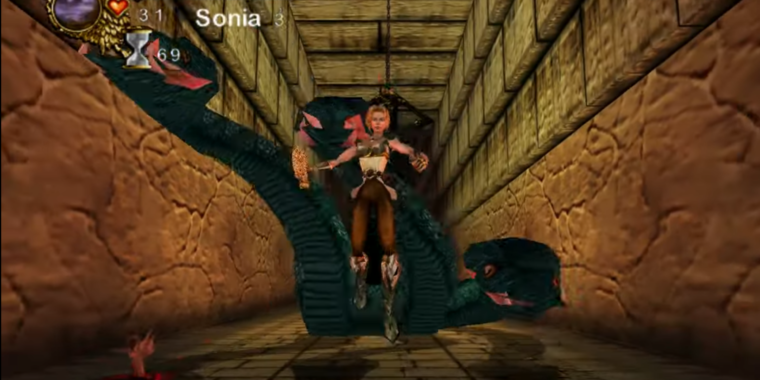 Back in 1999, journalists and industry insiders attending that year’s E3 got to try an early demo version of Castlevania: Resurrection for the Sega Dreamcast. When the game was canceled in March of 2000, those lucky few became the only people outside of Konami to ever experience a Castlevania game on the system.

Today, you can join them, as a playable version of the Resurrection demo has been uploaded to the Internet.

The long-lost demo comes to the wider world thanks to French Dreamcast preservationist Comby Laurent, who has documented a number of unreleased Dreamcast prototypes on his website. Laurent said he first became aware of a working copy of the Resurrection demo earlier this month through an acquaintance who had provided the first new video evidence of the demo in action.

Shortly after, the seemingly one-of-a-kind demo was listed on eBay, with the owner promising to back the disc up and release the contents “at some point.” That auction reportedly bid up to $20,000 before being taken down.

Fast forward to today, and Laurent has provided a full write-up and downloadable build of the demo thanks to an owner who placed “his trust in me by entrusting me with the [files].” (Laurent adds on Twitter that the owner “is adorable and passionate.”)

Resurrection was set to be the seventh named Castlevania title and the third in 3D, following two awkward Nintendo 64 entries. The game as envisioned would have given players control of both Sonia Belmont, the protagonist of 1997 Game Boy title Castlevania Legends, and Victor Belmont, a descendant who wouldn’t actually show up in a game until Castlevania: Lords of Shadow 2 in 2014.

Sonia is the only controllable character in the E3 demo, though, running and jumping through some very sparsely populated castle halls with her trusty whip and familiar secondary weapons like axes, knives, and vials of holy water. The blocky polygonal enemies include floating specters, fire-spitting skull towers, a giant three-headed hydra, and a bare-breasted, acid-spitting Medusa boss that ducks in and out of the shadows with frightening speed.

Magazine reports at the time estimated that the demo version was only 25 percent complete, so there are still plenty of glitches and rough edges in this playable version (including wonky camera controls and hit detection). In a 2007 interview with The Castlevania Dungeon, project art director Greg Orduyan said the game was making good progress subsequent to that E3 showing, but Konami canceled the project (and every other Dreamcast game it had planned) “the same day that Sony announced the PS2” in March of 2000.

The game was also reportedly plagued by strained relations between the Japanese parent company and the new subsidiary Konami of America, which was heading up the first Castlevania game developed outside of Japan. Orduyan vaguely gestured toward “some people within Konami who had their own agenda,” seeding some negative impressions of the game early in its development.

In any case, don’t let Konami’s decision stop you from enjoying what remains of this title over two decades later. In addition to the original GD-ROM files, Laurent has also provided a CDI disc image that can be burned to a compatible CD-R and played on original Dreamcast hardware (a compressed version can also be played on Dreamcast emulators).

Still jonesing for more canceled Dreamcast prototypes? Check out an Ecco the Dolphin demo that surfaced in 2016. Or how about an official Sega-produced Genesis/Mega Drive emulator designed to run on the Dreamcast?