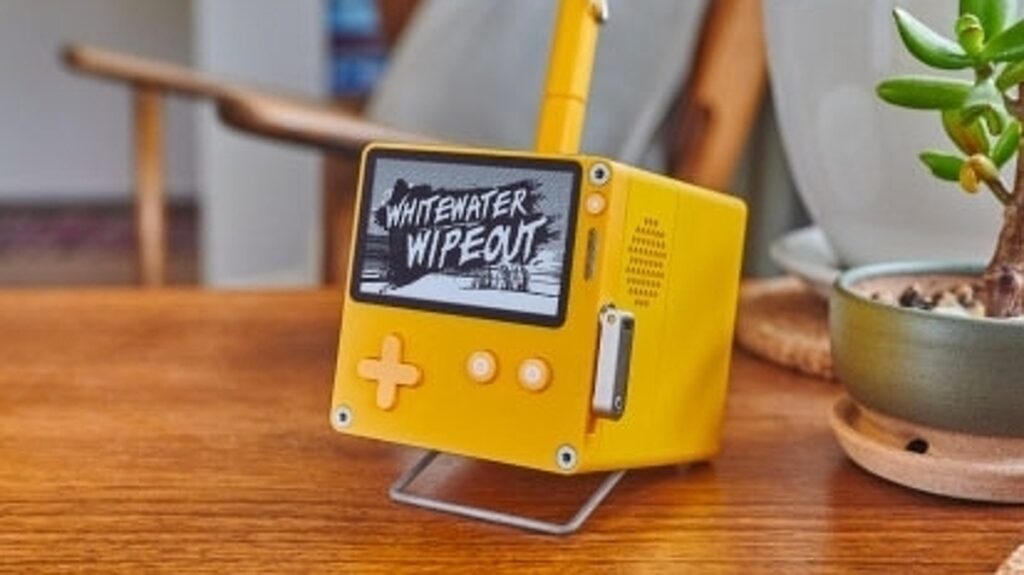 Dock and game line-up detailed, Papers Please dev on board.

Playdate, the mini monochrome handheld with a crank, will become available for pre-order in July priced $179 (UK price TBA).

The exact date will be announced closer to the time, with a week’s warning so you can be ready. The first units are “expected” to ship later in 2021.

Those details are different to those first announced back in May 2019, when the price was mentioned as $149. But Playdate’s offering has now been improved, with a 4GB memory instead of 2GB, and an initial 24 game season: double the games originally planned.

Today’s Playdate Update video includes a reveal of the quirky handheld’s optional dock. This charges the handheld, doubles as a Bluetooth speaker and for some reason includes a pen. That’s it there, sticking out of the top.

Pricing and availability for the dock will be announced in the future, developer Panic said.

Onto the games, two of which will drop onto Playdate every week through the system’s 12-week first season.

Most of these games have now been named, though some are being kept as a surprise, including some made by Panic itself.

QWOP designer Bennett Foddy will contribute to the first season of games. A future season will include Mars After Midnight, a game from Papers Please and Return of the Obra Dinn maker Lucas Pope.

Finally, we also got a look at the Playdate Cover, a plastic flip-down case lid for the handheld which will sell separately for $29, or be offered in a bundle with Playdate for $199. You can see that, as well as the handheld in action, via the Playdate Update video above.

Originally announced two years ago, Playdate production has been held up by disruption over the past year or so. Here’s hoping, like its crank, things are now turned around.