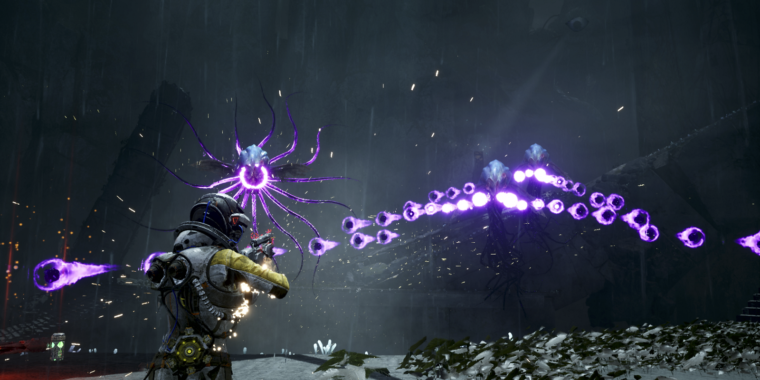 It’s not too surprising that a game like Returnal would have some hidden cheat codes allowing players to lighten the game’s punishing difficulty. But the method—which requires players to plug a USB keyboard into their PS5—for entering those newly discovered “debug mode” codes has some wondering if developer Housemarque intended for them to be accessible in the final product.

YouTuber TheRandomizer was among the first to publicize the cheats, posting a video showing a Returnal player dropping new weapons at will and teleporting to previous locations in the middle of play. A Reddit thread goes into more detail on the keyboard combinations required to get the codes to work, including warnings for certain situations where they may permanently ruin a run.

Developers traditionally use “debug modes” during a game’s development to test specific in-game situations without having to go through the sometimes arduous process of setting them up. There’s a long history of games that make extant debug modes accessible to players on the final released version, sometimes through hidden codes, sometimes through external cheat devices, and sometimes through an on-screen “debug console” that lets players type complex commands directly.

Returnal‘s debug codes seem a little different, though, requiring a keyboard to enter commands in a game that doesn’t feature native keyboard controls. This suggests developer Housemarque may have left these debug commands in the game as an oversight at the end of development, or maybe the company decided it wasn’t worth the effort to remove commands that would be difficult for users to find. (Housemarque has not responded to a request for comment from Ars Technica.)

Housemarque has already announced that a patch for the game is coming later today, and some players fear this debug mode may be patched out now that the information to access it is out in the wild. Players who want to ensure their access to these codes doesn’t go away should turn off auto-updates on their PS5 until others test debug mode access in future updates.

Housemarque is already recommending that players in the middle of a run should turn off auto-updates to avoid an issue where the update erases any current progress. While some players have been clamoring for a save option to help secure progress in the notoriously tough game, Housemarque has said, “We hear the community and we love you all. Nothing to announce now [on save functionality], but keep playing and enjoying the challenge as you can!”