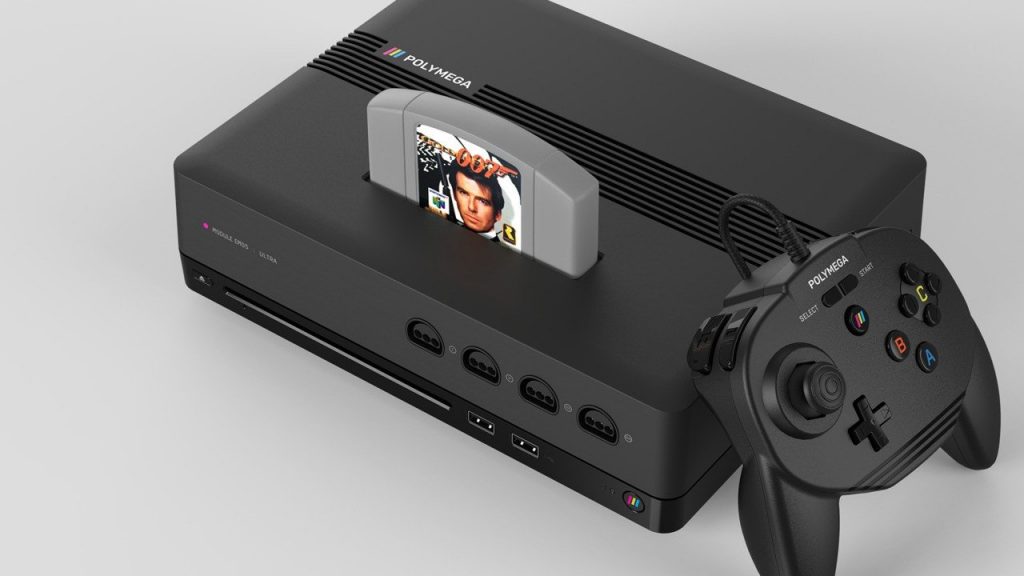 Playmaji’s modular retro-gaming platform Polymega will be getting N64 support, we can exclusively reveal.

The all-in-one console – which has finally found its way into the hands of customers this year after a prolonged delay – will be getting a new EM05 ‘Ultra’ module soon, complete with a controller designed by Retro-Bit, based on its popular Tribute64 pad. In case you weren’t aware, Polymega already supports original NES, SNES, Mega Drive / Genesis and TG-16 / PC-Engine games via its optional ‘Element Modules’, and the base unit itself can play CD games for the Mega CD, Saturn, PlayStation, TG-16 / PC-Engine CD and Neo Geo CD.

It has also been confirmed that modern-day cloud-streaming services will be supported in the future, and a digital storefront is also in development that will allow publishers and IP owners to leverage Polymega’s massive internal database of titles.

We sat down with Playmaji CEO & Co-Founder Bryan Bernal to talk about the new N64 module, and what the future holds for Polymega now it’s actually in the hands of customers.

Nintendo Life: Why did you pick the N64 as the next Polymega module?

Bryan Bernal: Because our customers asked for it. It’s been our most requested module since the first four were announced, and Polymega is well suited to support it. There are virtually no other options out there for playing the N64 library legally, outside of the original hardware — so it’s an obvious choice for us.

Is the N64 emulator you’re using based on a pre-existing one, or is it custom-made?

Part of our licensing and development / co-development process is ensuring that nearly all games can be played without any complicated configuration or set up by the user, and that you can plug a legitimate cartridge and controller in and play it without any hassle, plug-in flipping, configuration, and so on. So, when this module is released, it will employ the best legal solution we can provide while hitting the same minimum 90% compatibility requirement we have for our CD BIOS solutions and other supported game systems. The specifics will be released a little later on before launch.

Nintendo has come under fire lately for the standard of N64 emulation on Switch. Are you confident your solution can offer a more authentic experience for players?

Nintendo has the tools and resources to improve their emulation significantly over time, so I imagine any issues that are currently present at the launch of their service will improve with future updates. If they wanted to, they could probably even perfect N64 emulation. But more directly to your question, I think Polymega will provide a more authentic experience for players because you simply can’t have an authentic experience with just a handful of games on offer. N64 had nearly 400 games released for the platform across all regions. Even if Nintendo wanted to try to support every game on their service, it would be a very difficult undertaking and they probably wouldn’t be able to secure the rights to every N64 game for the platform to release digitally. My guess is that the number crunchers have calculated that they don’t have to, since they can get 80-90% of the effect with 10-20% of the games supported, albeit the most popular ones.

Are you able to offer 100% compatibility with all N64 games?

It’s unlikely that 100% of games will be supported at the launch of the EM05 Ultra module, but it will be at a minimum above 90% working great to near perfect. Over time, that amount will likely increase.

Will you be offering any emulation options for this, such as higher resolution modes and so on?

Maybe. Truth be told, we don’t particularly like the HD look and it’s ripe for unintentional bugs – hence the reason we don’t support it on our other consoles Polymega supports, such as Sega Saturn and PS1. Instead, we focus our efforts on virtual display filters which authentically re-create the look of classic TVs and smooth out jaggies significantly, the way they were meant to look. Polymega currently has some of the best scanline effects available anywhere, as well as CRT-style curvature — enhancing the effect significantly. Honestly, there are times where I think I’m looking at an arcade cabinet monitor while playing games – which is, in our opinion, how they were meant to look and how they were meant to be played.

The Tribute64 is probably the best third-party N64 controller on the market today, and the new pack-in RC05 Ultra Retro Controller is basically a new “wired” version of the wireless Tribute64 controller

Tell us a little about the controller that’s shipping with the module; what’s it been like working with Retro-Bit on that? Do you think N64 fans will be happy with it?

The Tribute64 is probably the best third-party N64 controller on the market today, and the new pack-in RC05 Ultra Retro Controller is basically a new “wired” version of the wireless Tribute64 controller, styled by us. You’ll also notice our version of the controller has a ‘SELECT’ button, something not found on any N64 controller. This is so you can play other systems on Polymega using the RC05. We’ll make sure this translates nicely to an analogue controller experience for Sega Saturn – so you can play stuff like Burning Rangers and Nights Into Dreams with it – and more. Retro-Bit has been great to work with, and we had met several times before this collaboration to discuss opportunities between our teams, so we’re happy that this one worked out, and I wouldn’t be surprised to see more collaborations between us in the future.

After quite a wait, Polymega is finally out; what are your thoughts and feelings now that the machine is in the hands of those who pre-ordered it all those years ago, and what would you say to those people whose confidence has perhaps been knocked by the delays, cancelled orders and lack of communication?

It’s great to see it in the hands of so many people. Even though it took a while, it took that long because we did it right and didn’t cut any corners. So, I think now that people have it in hand and are actually using it, it becomes quickly obvious that there’s something special about the system. It’s elegant, there’s no setup, it’s compatible with your real games, it makes them look amazing, and it even allows you to digitally archive your collection in a way that’s highly addicting and fun. Seeing your digital game collection grow with that signature Polymega style is just awesome, and you really can’t get that anywhere else. People tell us they feel like it’s something they’ll have forever; like there’s nothing that could possibly improve upon it.

Polymega was released during a very challenging time for many game hardware companies, and even today you can see the impact that the reverberating effects of COVID-19 have had on the release of nearly every gaming console product that was set to release in 2020-2021. The same issues happened to us, but earlier. We had to weather the storm just the same to get to the point where we are now shipping products to our customers. I would say our issues were particularly even worse because we had to deal with political issues in Myanmar, which is the country where Polymega Base Units are manufactured, so we’re grateful to have emerged from that situation relatively unscathed and things have now stabilized.

What kind of reaction and feedback have you had from those customers who now have their consoles?

Polymega’s store is quite far along in development and we’ve received a great deal of interest from publishers and developers on this front. Also, our internal game development and publishing studio is now ramping up to create and publish exclusive original content on Polymega

People absolutely love it. Lots of positive and encouraging emails via our web contact form, and expressing gratitude for making the system. I don’t think we’ve had even a single returned unit so far and we’ve shipped thousands of systems and modules now. We’ve had a few issues here and there with CD drives, but the vast majority of customers are happily enjoying their systems without any problems.

You’ve been supporting Polymega with several system updates in 2021; can we expect to see more features and functions added to the system over time?

Yes, Polymega’s crown jewel is our system software, and it’s something we expect to continue improving into the foreseeable future, not just at launch. We’re always coming up with cool new features to throw into a future update.

Are you still planning to launch a digital store on the console? Has there been much support and interest from publishers and developers in this?

Correct, Polymega’s store is quite far along in development and we’ve received a great deal of interest from publishers and developers on this front. Also, our internal game development and publishing studio is now ramping up to create and publish exclusive original content on Polymega.

Are there plans for more modules after the N64 one?

Yes, there are several other modules and products currently in development that aren’t ready to be announced yet. Some of these new modules don’t directly correlate to game consoles (a la NES, SNES, etc.) but enhance the game playing experience on Polymega. We’re not entirely ready to talk about that yet as we are currently focused on improving the availability of Polymega and fulfilment of pre-orders.

We’d like to thank Bryan for his time. You can check out our review of the Polymega here, and the system is available for pre-order direct from the Polymega site.