Prey: 8 Tips For Surviving A Nightmare 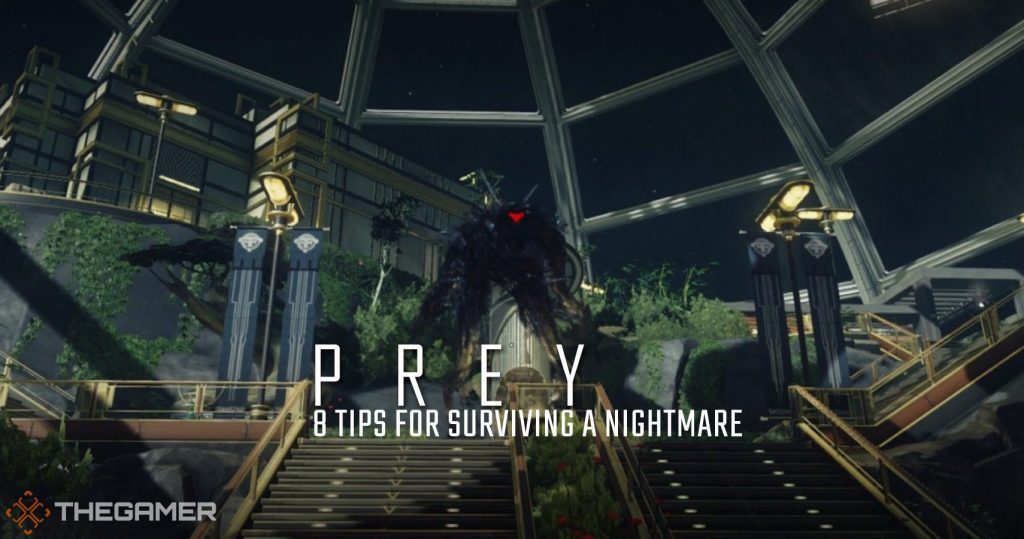 The Nightmare is one of the most terrifying Typhon you can encounter in Prey, and here are tips for surviving this daunting fight.

In 2017, Bethesda Softworks released Prey, a reimagining of the 2006 first-person shooter of the same name. Developed by Arkane Studios (makers of the forthcoming Deathloop on PS5), the game took elements from the 2006 game, as well as classic shooters like Half-Life and System Shock, to create something that would challenge players in new and interesting ways.

RELATED: 10 Tips To Get You Started In Prey

Most of that challenge came from the roster of Typhon enemies in the game. And of all those enemies, the aptly named Nightmare is easily the hardest one to beat. These towering foes are not only notorious bullet sponges, they also have a tendency to take out players with a single hit. This is why it is important to keep these tips in mind for your next encounter with one of them.

This should go without saying but a player’s best chance of surviving a Nightmare is by avoiding it entirely. After the creature spawns, it has a total of three minutes to hunt down the player before it disappears again.

So players can use the environment to their advantage by moving through rooms and passageways with low ceilings, or find one where they can seal the door behind them. Once the three minutes have elapsed, they’ll be able to roam around freely for the next 20 minutes or so before another one spawns.

Or at least try to avoid installing too many early on in the game. This is because Nightmares have a tendency to spawn at a more regular rate once a player has three or more such Neuromods installed.

And depending on how they’ve chosen to approach the game, they might not even need many of those mods. So be very specific with the mods you choose to install, or you might find yourself overwhelmed with back-to-back encounters that you are not quite ready for.

So let’s say you’ve decided to face one of these Nightmares head-on. The first thing you’ll want to do is to make sure you have the right weapon for the job. The Nullwave Transmitter is especially useful for briefly immobilizing a Nightmare, giving you enough time to use some recycler charges.

You can alternatively use your Psychoshock ability in place of the Nullwave Transmitter, then follow up with some Kinect Blasts. But more often than not, your best weapon against a Nightmare is whichever one happens to be your strongest one.

5 Make Sure You Have Enough Ammo

The next thing you’ll want to do once you’ve equipped your weapon of choice is to make sure you have more than enough ammunition for the fight.

RELATED: Prey: Every Location On Talos 1 Ranked From Worst To Best

As stated earlier, these Nightmares can be real bullet sponges, so there’s nothing worse than getting caught in an encounter with one with barely enough ammunition to finish the job. Chances are you’d only end up pissing it off, which is something you’d be better served avoiding. So always do an ammo count before jumping into the fray.

4 Use Combat Focus Before An Encounter

Some of the enemies you encounter on the Talos I can be fiendishly fast and aggressive. So to boost their chances of coming out of any kind of skirmish alive, players can use the Combat Focus Neuromod.

This will slow down time while increasing the amount of damage dealt, giving you a tactical advantage over even tougher enemies like Nightmares. It is especially effective once fully upgraded to level III, where you can move at regular speed while enemies are stuck in slow motion for up to 20 seconds.

3 Use The GLOO Cannon

The GLOO Cannon is one of the more creative weapons in Prey. It allows the player to spray gelifoam, a glue-like substance that expands and hardens when used.

RELATED: Prey: Every Weapon In The Game, Ranked

It can be used to build ramps to reach previously-unreachable areas, seals doors or passageways to prevent enemies from getting in, or in the case of the Nightmare hold it in place for up to 10 seconds while you escape or continue to attack. The weapon itself does not deal any damage, so it must be used in conjunction with another weapon like a shotgun to be truly effective in such scenarios.

2 Go For A Pre-Emptive Strike

While it is possible to take down a Nightmare by facing it head-on, a more strategic approach would be to sneak up on it. This would give the player an opportunity to get a few cheap shots in before it truly becomes hostile.

A good way of accomplishing this is by attacking it from behind, or the relative safety of a high vantage point. Nightmares are unable to reach higher levels that don’t have stairs leading to them, so players can use this to their advantage. Because if the Star Wars prequels have taught us one thing, it is the value of having the high ground.

And in the event that you are unable to find a safe spot from which you can open fire, you’ll want to keep moving to ensure you don’t become an easy target for the Nightmare.

Letting one get too close to you might result in getting one-hit, and standing in place at a distance leaves you susceptible to the three homing orbs it fires. Circle-strafing is a useful technique that keeps the Nightmare in view while you deal as much damage as you can, so keep those feet moving and the monster will be dead in no time.

NEXT: 10 Similar Games To Check Out If You Loved Prey

Michael Abayomi was born in Lagos, Nigeria. He shares a passion for books, movies, music, and video games. You can check out @michaelabayomi on YouTube, Twitter, or Instagram for more of his geeky adventures.