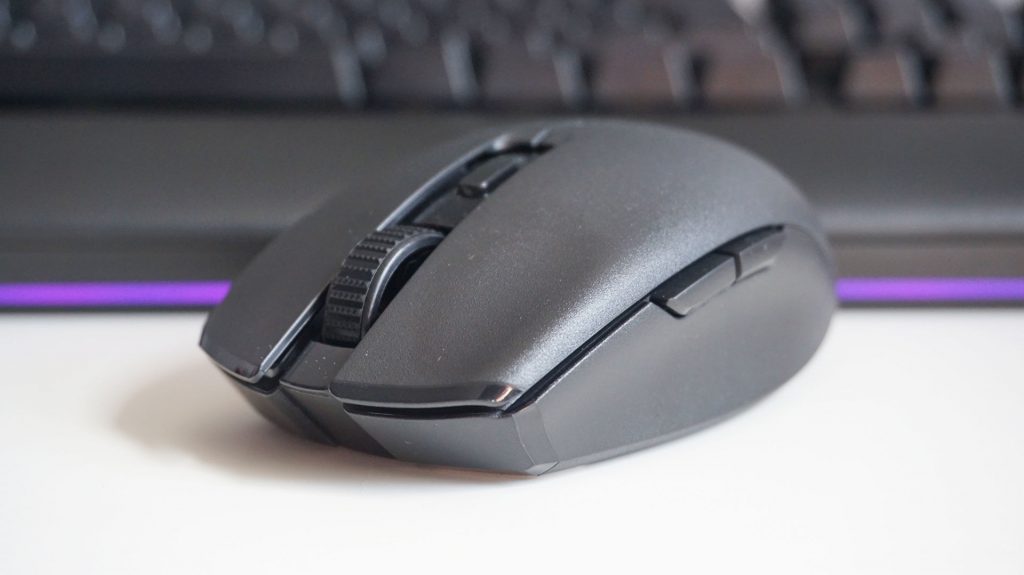 Razer have released a new version of their ultraportable Orochi gaming mouse today, giving this dinky, mobile-focused mouse a fresh new look, a faster, more responsive sensor and not one, but two different wireless modes that both give you hundreds of hours of battery life. Dubbed the Orochi V2, this thing is properly tiny. Weighing just 65g with its bundled AA battery (60g without) and measuring a mere 10.8cm in length – a good centimetre shorter than your typical gaming mouse – even my tiny girl hands are enough to dwarf this symmetrical, but still very much right-handed gaming mouse, and I can only imagine how titchy it’s going to feel for people with normal-sized man hands. Still, if you’re after an ultralight gaming mouse that can really go the distance, the Orochi V2 is well worth considering.

Unlike a lot of other wireless gaming mice, the Orochi V2 is completely battery-powered, supporting either AA or AAA batteries depending on what you have to hand. There are compartments for both underneath its easily-removable shell (along with a small cut-out to store its wireless USB dongle), and Razer say you’ll get up to an impressive 425 hours out of it when it’s connected to your PC over 2.4GHz wireless, or a stonking 950 hours over Bluetooth LE. Compare that to the 60 hours you’ll get on my current favourite wireless gaming mouse, the Logitech G Pro Wireless, without its RGB lighting flashing away (or 45 hours with it on), and there’s simply no competition.

Of course, part of the reason why the Orochi V2 has such good stamina is because it doesn’t have any of Razer’s RGB Chroma lighting eating away at its power banks. The only light you get is a small status dot just below the scroll wheel, which will flash red when your power gets low. The downside, though, is that it effectively becomes a glorified paperweight if it happens to die when you’re out and about without a spare battery to hand, as there’s no USB port to charge it back up again. I mean, you’d have to be pretty unlucky to have it die on you considering how mammoth its battery life is, but it’s something to think about all the same.

Still, I was pleasantly surprised by just how comfortable the Orochi V2 was to use on a daily basis, especially after the trouble I had with Razer’s similarly pint-sized Viper Mini mouse last year. I think that’s partly down to its wider design, as I was able to rest almost the entire ball of my hand (that’s my second, third and fourth fingers) across its 60mm chassis and grip it properly without feeling like it was about to slide off at any moment. The Viper Mini, on the other hand, is noticeably skinnier, measuring 53mm across its slim waist section, which was just enough to make my hand feel worryingly unsteady.

The Orochi V2’s two side buttons were very easy to reach with my thumb, too. I didn’t have to stretch or contort it in any way to give each button a firm press, and even the central DPI button below the scroll wheel was reasonably easy to get to in a pinch as well. You can, of course, program all of these extra buttons to do whatever you like by downloading Razer’s Synapse 3 software, and you can also set three different functions to the scroll wheel and changed the right click button. The only thing you can’t change is the left click.

Much like other Razer mice, these programmable functions include keyboard bindings, multimedia controls, using them to launch programs, websites, write preset chunks of text and perform Windows shortcuts, in addition to swapping around other mouse functions, and adjusting the mouse’s sensitivity or DPI speeds. As mentioned, the central DPI button will let you cycle through five sensitivity options out of the box (I found option 3, 1600 DPI, to be the easiest one for everyday use), but you can adjust these to whatever speed you like in increments of 100 (ranging from a dead-slow 100 DPI to a blisteringly fast 18,000 DPI) through Synapse 3, or completely move this button function to one of the side buttons if you prefer.

There are several other sensitivity options to choose from as well, including a sensitivity clutch button, which drops the mouse’s sensitivity speed to whatever DPI you like as long as it’s held down, and an on-the-fly sensitivity function which, when pressed, lets you adjust sensitivity speed using the scroll wheel. The former will be particularly handy for competitive FPS players who like to slow right down when aiming down their sights, while the latter gives you a bit more flexibility to find just the right speed outside of the five presets mentioned above. In short, you’ve got plenty of customisation options with the Orochi V2, and you shouldn’t have any trouble at all setting up just the way you want it.

I didn’t have any trouble using either of the Orochi V2’s two wireless modes to play games, either. Razer’s Hyperspeed 2.4GHz wireless technology felt just as quick and responsive as using a traditional wired mouse when I blasted through the opening level of Doom (2016), and even its Bluetooth LE support was serviceable, too. There was perhaps a tiny bit of lag when using the mouse over Bluetooth, admittedly, so I’d recommend sticking with its Hyperspeed dongle for shooters and other fast, competitive games, but I was able to play a perfectly decent chunk of Final Fantasy XV with it over Bluetooth without any real drop in performance. Moving the camera around felt one-to-one and clicking the Orochi V2’s mechanical switches to swing Noctis’ sword and roll out of the way of monsters never left me feeling frustrated. The mouse was very quick to wake from sleep, too, allowing me to pick up exactly where I left off without requiring any extra giggling to get it going.

All in all, the Razer Orochi V2 is a great ultralight wireless gaming mouse, and it’s probably one of the best Bluetooth gaming mice I’ve tested recently, too. The reliance on batteries may not sit well with some people, and those with larger hands than me may struggle with its titchy proportions as well, but if you’re a fan of small, ultralight gaming mice then the Orochi V2 is well worth adding to your consideration pile. Its price of £70 / $70 is perhaps a little steep compared to other gaming mice out there, but I reckon its epically long battery life, comfy design and numerous customisation options go a long way to make up for it. Get the Corsair Harpoon RGB Wireless if you’re after something a bit bigger and cheaper that can do Bluetooth and 2.4GHz wireless, but if it’s a low weight you’re after, the Orochi V2 is a great step-up.