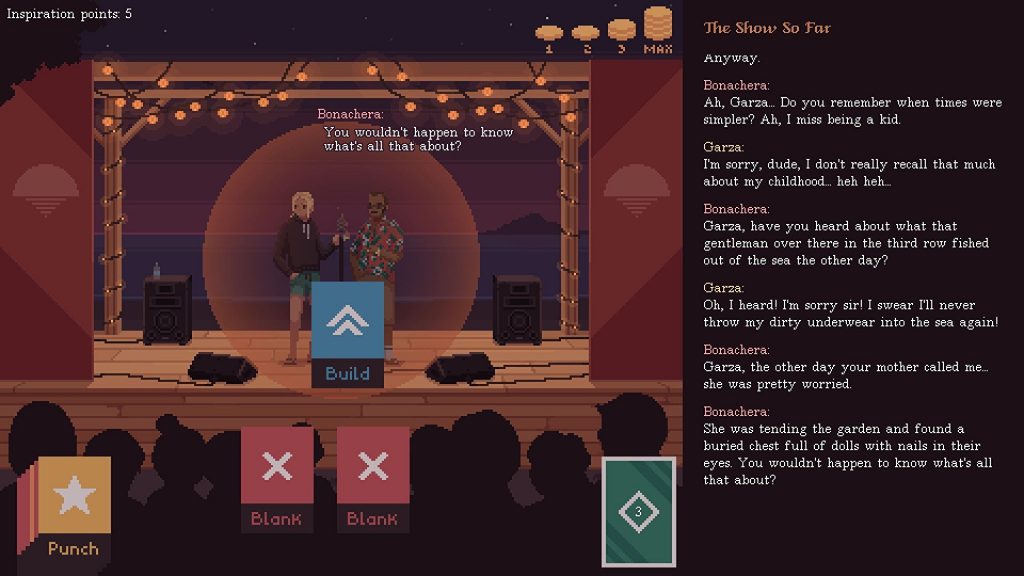 You may know Deconstructeam from their cyberpunk bartending story game The Red Strings Club, but they’ve made other games. Several other games, actually, which they’re pulling into a colleciton called Essays On Empathy. Essays includes a bunch of previously released Deconstructeam story romps along with their new game De Tres Al Cuarto about a couple comedians trying to make it big together. Essays On Empathy is launching on May 18th, and you can snag a peek at what it includes in a new trailer.


Essays On Empathy includes ten games in total, some of which you may have seen pop up around these parts before as free games on Itch. There’s Eternal Home Floristry about a hitman convalescing in a flower shop, 11.45 A Vivid Life about a girl who discovers her skeleton isn’t hers, the cyberpunk detective game Supercontinent Ltd, and more.


Their new story, De Tres Al Cuarto, is the one about two comedians Garza and Bonachera. Deconstructeam call it a deck-building comedy game. As with other Deconstructeam games there looks to be some dialogue picking, some humor, and probably some introspection about, well, everything?


A couple of Deconstructeam’s games in this here trailer do have some pixelated nudity, in case you happen to not be watching from a desk in your bedroom.


“This collection comes during a time in which we are still recovering from a breakdown we suffered due to stress and overworking ourselves during the 2020 pandemic,” Deconstructeam say. “[De Tres Al Cuarto] has been developed as a sort of rehabilitation therapy after being unable to work for about half a year. It’s a comedy game, but it talks about both the struggles and pleasures of the not-so-successful creative life.”


If you’re not familiar with Deconstructeam, they do pretty swell stories. RPS’s The Red Strings Club review has a lot of good to say about their cyberpunk bartender game.


“It’s hard for me to get away from the way the game couldn’t be more tailored to my particular interests, though the social deduction and manipulation has a driving force of its own,” Matt Cox said. “The dialogue is fascinating, sure, but also funny and tense—I had one moment where a misclick made me say the wrong thing, and I involuntarily gasped.”


Essays On Empathy also packs in a soundtrack, a mini documentary, and other nice behind the scenes tidbits from development on Deconstructeam’s games.


Essays On Empathy launches on May 18th over on Steam.

Disclosure: Former RPSer Brendy Caldwell (RPS in peace) did some editing for one of the games in the collection.