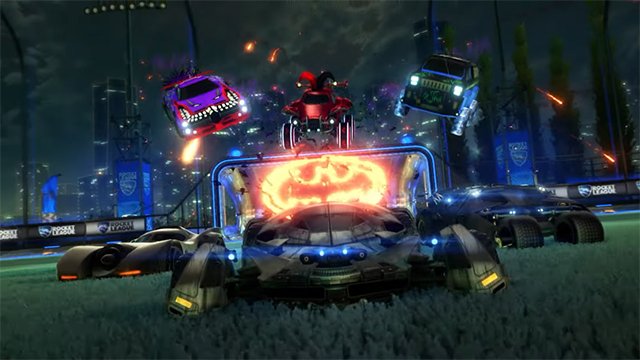 Rocket League has long history with Batman and now it is having a whole event focused around the Dark Knight. The upcoming Haunted Hallows event kicks off on October 14 (and ends on November 1) will bring a bunch of new Batman-related items into the mix along with some returning Batmobiles.

Psyonix showed off these items Haunted Hallows trailer, which is listed below. It will have cosmetics like the Joker Dominus Decal and Boost, Gotham’s Finest Merc Decal, Harley Quinn Wheels and Topper, Poison Ivy Boost, and more items that have yet to be revealed. Everyone that simply logs in during the event’s runtime will also get the free Dark Knight Player Title.

MORE: How Back 4 Blood Is Trying to Build the Biggest Audience Possible

The Batmobiles are not new, but are making their return after being removed from the game in 2019. The Batmobiles from the 1989 film, Dark Knight trilogy, and the one from Batman V Superman will be coming back in a bundle that costs 2,000 credits (which is $20). This package also comes with three goal explosions that have the Bat-Symbols from each film. Their included Real Life Decal will also give them their signature black look.

The Batmobiles will also be on sale individually for 800 credits. Their Real Life Decals will be 300 credits and the goal explosions will be 500 credits when purchased individually.

The event is also touching one of the game modes and one of the arenas. The party mode Rumble will turn into Gotham City Rumble that gives the power-ups a Batman-esque twist. For example, Poison Ivy’s vines will replace the grappling hook. The Beckwith Park arena will also be placed inside Gotham City and will hold a few Batman Easter eggs.

Rocket League has gotten a whole host of DLC vehicles from other franchises such as James Bond’s Aston Martin Valhalla and Aston Martin DB5 as well as some of the cars from Fast & Furious. It remains to be seen if anything from the upcoming The Batman will make it into the car soccer game in the future.