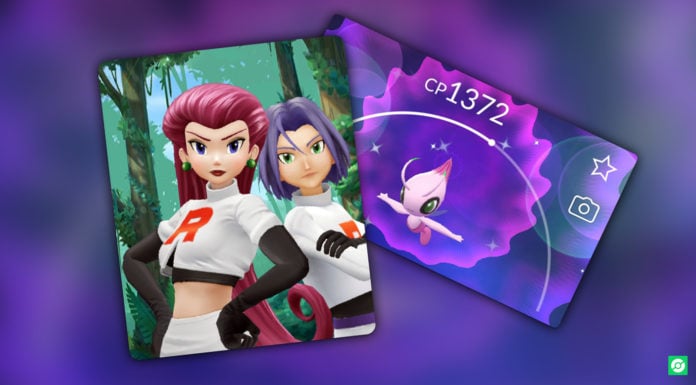 Trainers can now pick up the Shiny Celebi Special Research quest line titled “Distracted by Something Shiny”. This quest line is not time limited, but you need to pick it up during the Secrets of the Jungle Event. Unlike previous Special Research stories, this one is narrated by Jessie and James.

Completing this Research quest line will grant you an encounter with a guaranteed Shiny Celebi. Distracted by Something Shiny is free to participate in. 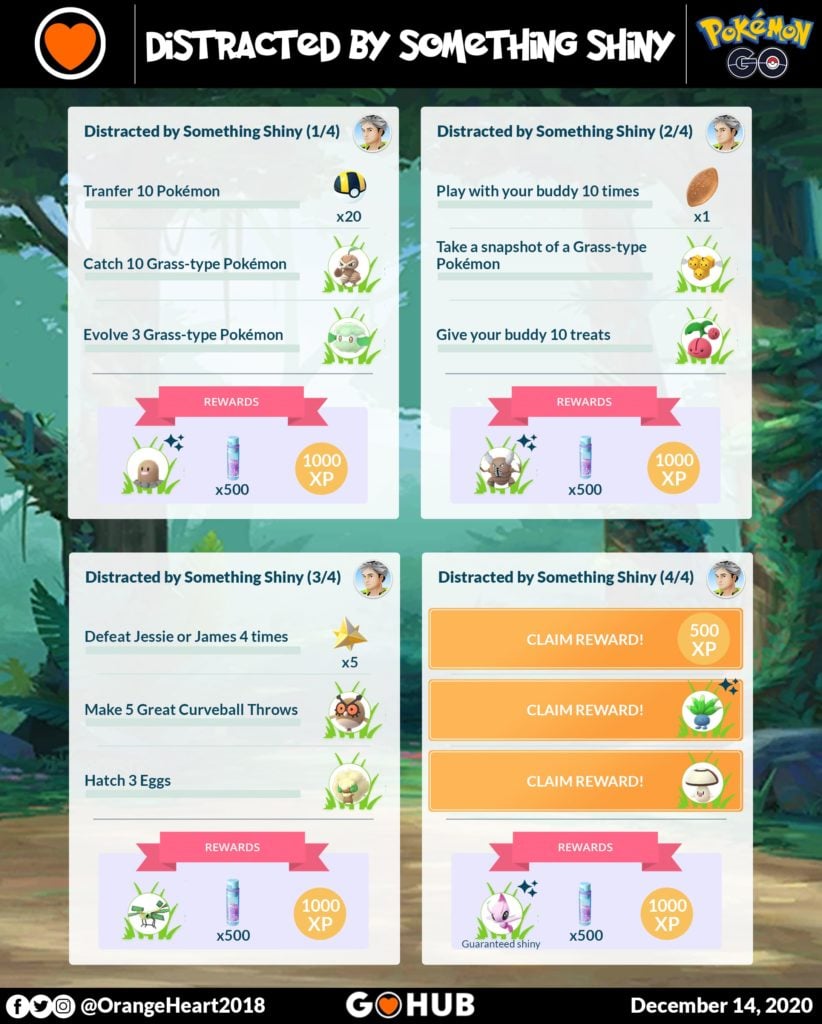 Jessie: Hey, James, did you hear?
James: What is it, Jessie?
Jessie: Apparently, there’s a mysterious Pokémon in a jungle nearby!
James: Go on!
Jessie: They say it’s called the Protector of the Jungle or something like that.
James: Oh? That sounds like the kind of Pokémon the Boss would be happy to see!
Jessie: It’s going to be a pain, though, since we don’t really know the area.

James: Hmmm, maybe we can con someone into helping us!
Jessie: Yeah… Huh? Hey, you! You must be an assistant the Boss sent! Yeah, why else would someone be out here in the middle of nowhere?
James: Assistant? Oh! Of course! An assistant! The Boss has high expectations for us, after all. Now that you’re here, let’s get to work.
Jessie: Nice work, kid! I can’t believe you actually did it!
James: Yeah! It feels nice to have somebody to boss around— I mean, uh, somebody to help us out! Jessie and I are constantly on our feet, you know.
Jessie: As you can imagine, it’s hard for us to maintain our good looks when we’re always running around like this. Anyway, you did your bit, so I guess we can let you take a little break.
James: Superb idea, Jessie! It’s important to change up the pace every once in a while!
James: Go on and spend some time with your buddy.

Jessie: I’m so glad the Boss sent along someone so useful to help us!
James: Now that you mention it, you haven’t told us anything about yourself. Where are you normally stationed? How long have you been with Team Rocket? Oh, what’s your favorite thing about the Boss? Do tell!
James: Hey, who exactly are you?
James: … … …
Jessie: You’d better start talking.
Jessie: Aha! I knew you were just a no-good Twerp! This whole thing was suspicious from the start! Did someone send you to get in our way?! Yeah, that must be it!
James: I trusted you! I thought you were one of us!
Jessie: You know too much! We can’t let you go! Let’s get ’em, James!
James: Don’t you dare get in our way! You’ll regret it if you do!
Jessie: Don’t you know who we are?! Well, let us formally introduce ourselves!
Jessie: Prepare for trouble…
James: And make it double!
Jessie: …
Jessie: To protect the world from devastation!
James: To unite all people— HEY! Are you even listening?!
James: Hey, why so quiet all of a sudden?
James: Jessie, who actually told you that we’d be getting an assistant?
Jessie: Nobody told ME anything!
James: Well, no one told me, either!
Jessie: But you’re the one who said they were sent by the Boss!
James: I said no such thing!
James: … … …

Jessie: I can’t believe we were defeated by a Twerp like you!
James: That was totally unexpected. What will the Boss say…?
James: Huh?!
Jessie: Hey, behind you! Isn’t that Celebi? Could it be the so-called Protector of the Jungle?!
James: Drat! That Pokémon was supposed to be ours!
Jessie: Mark our words…
James: We’ll get you next time!
Jessie: We’re blasting off again!

Credits for Tasks and Rewards: The Silph Road