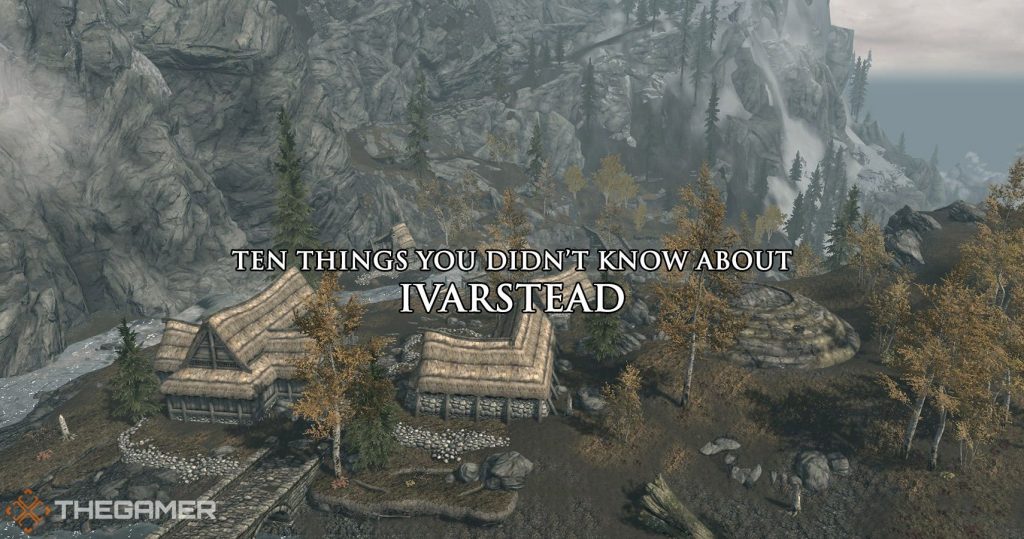 Ivarstead is a small town located in the Rift that the Dragonborn has to pass through on their way to meet the Greybeards. Although Ivarstead doesn’t have many notable characters or side quests, there are still a bunch of small discoveries that can be made in the town if it is explored to its full extent.

RELATED: Skyrim: 10 Things You Didn’t Know About The Blades

Not only does Ivarstead have a few small side quests, but it is also home to an interesting dungeon called Shroud Hearth Barrow. Ivarstead is also one of the oldest towns in Skyrim which is one of the reasons that its history is so fascinating.

10 Most Of The Citizens Want To Leave Ivarstead

Ivarstead might be a cute little town in Skyrim that lives in the shadow of High Hrothgar, but, it doesn’t have much to offer for the rest of Skyrim. Compared to a lot of the other towns in the game, Ivarstead isn’t very impressive and lacks job opportunities for its citizens.

Since Ivarstead doesn’t have enough work for all of the inhabitants of the village, a lot of the civilians discuss how they would like to leave during dialogue.

Temba is one of the citizens of Ivarstead, and she can be found walking around the town and also inside of the inn. When you speak with her, Temba will reveal that she hates bears and will request 10 bear pelts in exchange for a large amount of gold.

The amount of gold that can be obtained from completing this side quest varies depending on the Dragonborn’s level at the time of turning in the bear pelts.

8 The River Next To Ivarstead Is Abundant With Diverse Fish

There is a large river that sits on the edge of Ivarstead, and although this river may not seem like it has anything to offer, there are a plethora of different types of fish that can be caught in the river.

RELATED: Skyrim: 10 Things You Didn’t Know About The Stormcloaks

Fish can be used for making potions at an alchemy table, which is why it is so important to note that this river has many different kinds of fish. They can be caught easily by standing next to them and pressing the action button. This river runs all the way across town and can be accessed on either side of Ivarstead.

Ivarstead is unique in many different ways; however, one of the ways it stands out from the other smaller towns across Skyrim is that it has its own guards instead of having Riften guards.

RELATED: Skyrim: 10 Things Most People May Have Missed In Dawnstar

Most towns in Skyrim have the guards from the largest city in the hold stationed in their village; however, Ivarstead guards are exclusive to this small town on the outskirts of the Rift.

An NPC named Klimmek resides in Ivarstead, and he has been taking supplies to the Greybeards for the majority of his life. Klimmek has become too old to climb the many steps that are required to reach High Hrothgar, and if spoken with, he will request that the Dragonborn take these supplies up to the wise Greybeards in his place.

Klimmek is easy to miss depending on which path is taken to High Hrothgar; however, this side quest shouldn’t be missed out on because it is incredibly easy to get a large sum of gold for simply delivering a package. Like other side quests, the player’s level determines how much gold is obtained upon completion.

5 Narfi’s Sister Can Be Found In The River

Narfi is a man that lives in a broken-down house on the outskirts of Ivarstead, and he is well known by the other inhabitants of the town. While talking to the innkeeper, he reveals that Narfi’s sister went missing and never returned, which is why Narfi is so distraught.

The sister’s body can be found in the river near Ivarstead, and it is incredibly sad to realize that Narfi will never see his sister again. It is also worth noting that Narfi is one of the civilians that the Dark Brotherhood requests to be killed during side quest contracts.

4 Leeks, Tomatoes, Cabbage, And Wheat, Can Be Sold To Boti For 5 Gold Each

Different crops can be sold to Boti for five gold each if they are brought to her in Ivarstead. It is possible to pick certain types of crops off of other people’s farms throughout Skyrim and sell them to this character for a small profit, although there are also other characters throughout the game that can buy these items.

Although the five gold that Boti pays for these food items may not seem like much, it is easy to collect tomatoes, leeks, and the other crops since they’re found at almost every farm in Skyrim, and they can also be found inside of cities and shops.

3 The Innkeeper Is The Only Merchant In Ivarstead

Most towns and cities in Skyrim have a few different merchants to barter with; however, Ivarstead is one of the rare settlements that only has a single merchant, which happens to be the innkeeper.

The innkeeper sells many different types of items consisting of mostly food and drinks, which are useful for crafting food recipes and providing special bonuses. The innkeeper’s name is Wilhelm.

2 Ivarstead Was Built As A Rest Stop For High Hrothgar

Ivarstead was originally built as a rest stop for travelers that are climbing the steps to get to High Hrothgar and meditate. However, many people moved to this town over the years and set up businesses, such as the farm and the mill.

Luckily, there are still enough adventurers that wish to climb the steps that Ivarstead remains in business, although it seems to be a slowly dying town.

The most notable building in Ivarstead isn’t a building at all, but instead, a dungeon called Shroud Hearth Barrow. The citizens of Ivarstead believe that this crypt is haunted, although nobody is willing to go inside of it to find out.

If asked, the innkeeper tells the Dragonborn about Shroud Hearth Barrow and what he knows about it. While adventuring inside of this dungeon, it is revealed that there is a man using alchemy to change his appearance to that of a ghostly figure; however, the crypt itself is not haunted by ghosts.

NEXT: Skyrim: 10 Things Most Fans Might Have Missed In Markarth

Michael is a writer, game-player, and VR enthusiast. He has been a hobby writer all his life and is now a content writer for TheGamer among other gaming websites. He is passionate about writing content that will entertain and share knowledge about his favorite games. An aspiring writer, Michael is just trying to share his passion for video games with the world.