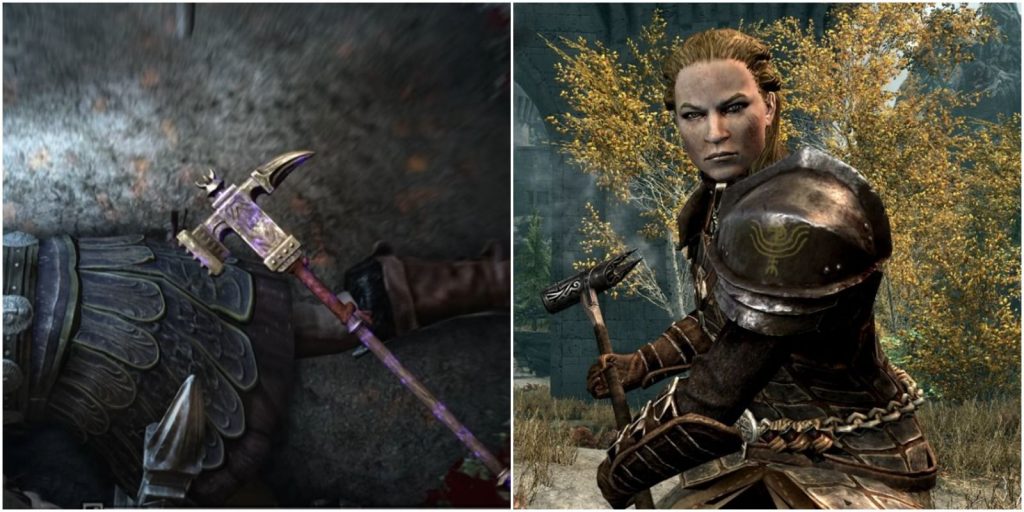 There are a ton of different weapon types in The Elder Scrolls 5: Skyrim, but the weapon type with the highest damage output is Warhammers. Warhammers are large weapons that require two hands to wield, and they usually swing much slower than their greatsword counterparts.

Since Warhammers are one of the most commonly encountered weapon types in Skyrim, there are a bunch of unique-looking Warhammers and Warhammers with special effects. Some of these effects are exclusive to Warhammers; however, some unique Warhammers can be disenchanted so that their effects can be applied to other unenchanted weapons.

The Dawnguard Warhammer is one of the best weapons to use while fighting vampires in Skyrim’s Dawnguard DLC. This Warhammer deals 22 base damage to regular enemies, and it also deals extra damage towards every type of Elder Scrolls vampire.

Troll’s Bane is a unique Warhammer that the Dragonborn can acquire at the troll den east of Valthume. Troll’s Bane doesn’t deal an exceptional amount of base damage; however, it does deal extra damage towards trolls, which are one of Skyrim’s most common enemies.

When the Dragonborn hits a troll with Troll’s Bane equipped, it deals fire damage to the monstrous enemy. There aren’t any other weapons in Skyrim that deal extra damage towards trolls, so Troll’s Bane is a must-have for two-handed weapon users and enemies of trolls alike.

Stalhrim is a unique type of ore that was added into the game with the Dragonborn DLC, and it is incredibly rare but also potent. Weapons created using Stalhrim are much more powerful than weapons forged from other types of ore and steel.

The Stalhrim Warhammer doesn’t come equipped with any special effects; however, it deals 26 base damage which is higher than every other Warhammer with the exception of the Daedric Warhammer and the Dragonbone Warhammer.

Although the Daedric Warhammer is incredibly powerful and has an interesting design, it isn’t the strongest unenchanted Warhammer in Skyrim. Daedric warhammers can also occasionally be obtained as dungeon loot while adventuring at high levels, however, it is very rare.

The Dragonbone Warhammer is the most powerful unenchanted Warhammer in Skyrim and all of its DLCs. This weapon deals 28 base damage and is forged using dragon bones, one of the strongest materials in the entire game.

Some weapons have an enchantment that deals extra elemental damage towards enemies; however, the Champion’s Cudgel has a fifty percent chance of dealing fire, frost, and shock damage to an enemy all at once.

The Champion’s Cudgel is found during the “March Of The Dead” quest after defeating General Falx Carius. This weapon has the appearance of a special Imperial crafted Warhammer, and players won’t find anything like it in the base game or in either of the expansion packs.

The regular Dawnguard Warhammer is powerful; however, the Dawnguard Rune Hammer is a much better weapon for the long term.  It is found during the “Lost Relics” quest, which is a side quest that the Dragonborn can complete after officially joining the Dawnguard faction.

When the Dragonborn bashes a nearby surface, a fire rune is placed upon the surface and explodes when an enemy comes near it. This effect is incredibly fun to use, and the Dawnguard Rune Hammer is the only weapon that has this enchantment.

Aegisbane is a unique Warhammer that deals five points of fire and frost damage towards all enemies. Although Aegisbane isn’t the most powerful Warhammer in Skyrim, the reason that it is so great is that it can be acquired very easily compared to most of the other Warhammers in the game since the Dark Brotherhood is easily joinable.

Certain Warhammers are better depending on what type of build is being used, and the Longhammer weapon is best for a player that prefers to defeat enemies swiftly because its effect grants a 30% faster swing speed, a major difference while a Warhammer is being used.

Players that want to obtain the Longhammer must travel to Liar’s Retreat; it is located near the corpse of Rahd. The Longhammer has both a powerful enchantment and is one of the easiest Warhammers to acquire which makes it incredibly deadly and worth obtaining.

Volendrung absorbs stamina from enemies and the wielder gets the stamina added to their overall stamina pool. The Dragonborn can use this enchantment to steal an enemy’s stamina and continuously power attack over and over again in a short period of time.

Also noteworthy, Volendrung deals 25 base damage, just a few points below the strongest base Warhammers in Skyrim. Volendrung is a Daedric Artifact, and it is obtained during the quest “The Cursed Tribe”.


Next
Pokemon: Everything You Need To Know About The Kangaskhan Theory

Michael is a writer, game-player, and VR enthusiast. He has been a hobby writer all his life and is now a content writer for TheGamer among other gaming websites. He is passionate about writing content that will entertain and share knowledge about his favorite games. An aspiring writer, Michael is just trying to share his passion for video games with the world.