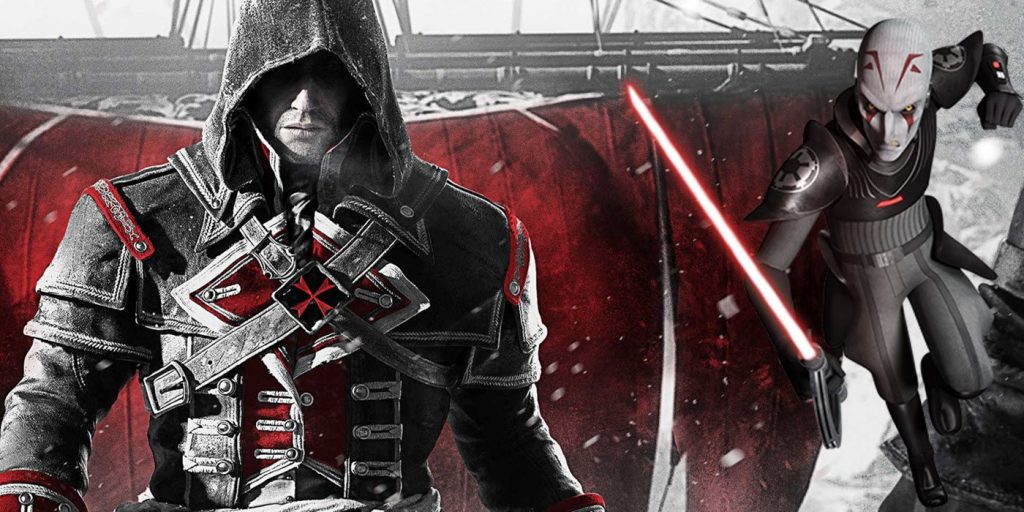 While most Star Wars games focus on Jedi and Good vs Evil, a new take on the Assassin’s Creed Rogue story formula could make for an interesting twist.

Earlier this year, news broke that the exclusivity deal with EA and the Star Wars IP had been changed. While the exclusivity deal was originally set to expire in 2024, the surprising reveal and return of Lucasfilm Games licensing brand also led to the confirmation that iconic franchises like Indiana Jones and Star Wars have been opened up to other companies like Ubisoft and Bethesda. While EA still has rights to product games based on the Star Wars brand, it no longer has exclusive access.

As of now, Ubisoft hasn’t revealed much regarding its plans for Star Wars, though Massive Entertainment has been tasked with being the lead studio on whatever that game may be. Considering the studio is coming off of two successful launches with The Division and its sequel, many fans have assumed that Ubisoft’s Star Wars game will be an open world experience, something the company has become known for.

Narrowing anything down from there is nearly impossible as the Star Wars franchise features a wealth of content and nearly limitless potential storylines and eras that could be utilized. Still, in an effort to be different, Ubisoft should likely look inward at its own under appreciated Assassin’s Creed Rogue as a potential template.

Star Wars games have been around since the movie franchise began, going as far back as the Apple 2. Unsurprisingly, centering games around Force users is a typical focus for most games in this franchise. In terms of fun factor, having characters that can use powers, abilities, and weapons like a lightsaber fit video games incredibly well. In most cases, story lines for these games also focus on the battle of good versus evil, a common theme in Star Wars which has protagonists like Luke Skywalker, Rey, Obi-Wan Kenobi, and others fighting against the forces of evil, typically a dark side user or organization.

Games like Star Wars: The Force Unleashed highlight why this is typically the case, as feeling overpowered by using abilities that throw enemies around or slice them up can be satisfying and really entertaining. Even the Battlefront games, which feature a variety of characters and units to play as, have a dedicated hero characters which feature a wide selection of lightsaber and force-enabled users.

Although most games in the IP feature force-users, there are outliers that go against this policy and have gone on to find success. The fan favorite N64 game, Star Wars: Shadows of the Empire puts players in the shoes of smuggler Dash Rendar, a character who has no force abilities and relies heavily on a blaster. Republic Commando is a squad-based tactical shooter where players control elite clone troopers. There are a bunch of vehicle based Star Wars games like Episode 1: Racer, X-Wing vs Tie Fighter, Rogue Squadron, and the well received Star Wars: Squadrons.

Why Assassin’s Creed Rogue as a Template?

As fans know, Star Wars has a massive cast of characters, not all of which would align with the side of good. One theme that seems to constantly fly under the radar is the idea of stepping into the shoes of a bad guy. The Force Unleashed series dabbled with this idea, but ultimately pulled back on it before players dove too deep.

After suffering through a traumatic event, assassin Shay Patrick Cormac begins to doubt the intentions of the Brotherhood and how they handle things. Taking things into his own hands to stop the dangers of the Pieces of Eden, Cormac is branded a traitor and left for dead. However, after surviving the ordeal and traveling to New York City, he soon runs into members of the Templar Order like Haytham Kenway and commits himself to their cause in preventing any more destruction caused by the use of the Pieces of Eden.

At this point, players become an Assassin Hunter, tracking down members of the Brotherhood and at one point Shay’s friends and allies. Due to the results of the game’s story, players directly influence the events that happen in Assassin’s Creed III as well as the opening moments of Assassin’s Creed Unity.

From a Star Wars perspective, there are plenty of opportunities to let players wield the dark side without relying on Emperor Palpatine or Darth Vader. One area that video games haven’t explored all that much is the time directly after Star Wars: Revenge of the Sith which showcases the fall of the Jedi Order. Star Wars Jedi: Fallen Order and even the first Force Unleashed game touch on this content, but taking a direct approach where players become a Jedi Hunter is largely untapped.

During this time, the Sith created a special group of Jedi hunters called Inquisitors, which were largely limited to boss battles in Star Wars Jedi: Fallen Order. They’ve been showcased in other media like comics and TV shows, but allowing players to experience these dark side users could be entertaining. They’re able to use the dark side of the Force as well as utilize lightsabers, two elements that most Star Wars games like to utilize. It would also allow players to experience new parts of the overall story, potentially showing what happens to a lot of the Jedi that went missing or weren’t touched upon in the movies or TV shows.

On the other hand, bounty hunters are another element that hasn’t really translated well to video games outside of the 2010 title, Star Wars: Bounty Hunter, which ultimately pulled in lukewarm reviews. While characters like Boba Fett are immensely popular, companies have largely overlooked these characters or haven’t found a way to get them to really work in a video game like the ill-fated Star Wars 1313.

However, the tide may have turned thanks in large part to the Disney+ series The Mandalorian, which follows the Mandalorian Din Djarin. Season 2 also brought even more Mandos in tot he story including the previously mentioned Boba Fett as well as the Nite Owls led by Bo-Katan Kryze. Considering the immense popularity of The Mandalorian and planned Book of Boba Fett spin-off later this year, the time for a bounty hunter or Mandalorian focused game might never be higher than it is right now.

Derek’s love of games came at an early age when his parents first brought home the Nintendo Entertainment System. From then on, countless nights were spent hunting ducks, stomping turtles, exploring far off planets, and combing through dungeons with a trusty sword and shield. Originally growing up exclusively with Nintendo products, Derek’s perspective grew to include other platforms ranging from Sony, to Microsoft, the PC, and more.

As his views and opinions grew, so did the desire to connect with other players and video game fans. In 2011, his blogging and writing adventure began at his personal site Gamercrash.com. While he continues to write there, he eventually joined up with the Game Rant crew in 2015, writing everything from features and guides, to the latest breaking video game news.