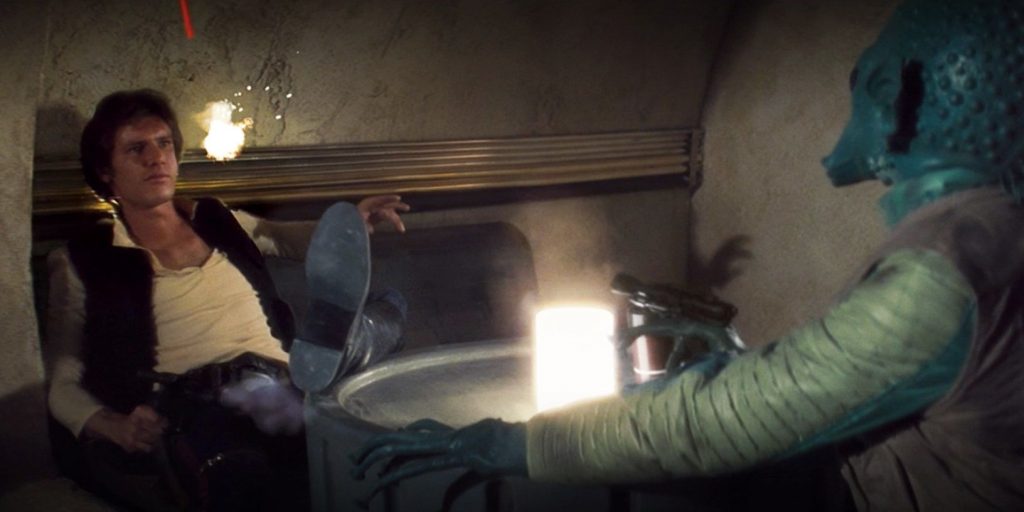 The fan debate over who shot first has devolved into semantics, but this crucial scene has major implications for Han Solo’s characterization.

When Disney Plus first launched with every Star Wars movie available to stream, the “Han shot first” debate briefly returned to fan discussions, because the Mouse House made yet another alteration to Han Solo’s standoff with bounty hunter Greedo in Mos Eisley Cantina. Greedo still shoots first, as he did in George Lucas’ wildly controversial “Special Edition” release, but now, right before the shootout, he says, “MacClunkey!” This obscure Tatooine-area insult from The Phantom Menace doesn’t make the scene any better. The only way to fix Han and Greedo’s fatal confrontation is to remove Greedo’s shot and restore Han’s rightful place as the first shooter.

Sometime in the mid-to-late ‘90s, after pioneering the CGI technology required to tell the story effectively, Lucas began work on the Star Wars prequel trilogy. Understandably, Lucas got a little carried away with his new superpower – the hitherto-unheard-of ability to insert any shot imaginable, no matter how impractical, into a live-action movie at will – and went poking around in the original trilogy.

RELATED: Star Wars: The Theatrical Cuts Of The Original Trilogy Should Be On Disney Plus

The initial 1977 Star Wars movie, The Empire Strikes Back, and Return of the Jedi were already perfect in their original form. Aside from cleaning up the edges of a few rough effects, the Special Editions didn’t offer anything that truly improved the movies. While the movies themselves are strong enough to overlook most of these changes, some of them are really egregious – like the Mos Eisley Spaceport sequence.

The theatrical version of the Mos Eisley scene went on to revolutionize science fiction by introducing the “used future” aesthetic that would later influence Alien, Blade Runner, Terminator, and The Matrix. The Special Edition version, however, is a prime example of how to overuse CGI. Lucas emptied his digital playbox into every frame of the Mos Eisley sequence and even added a few entirely computer-generated shots that look like PS2 cutscenes with primitive effects and inorganic digital camera movements. During the iconic Jedi mind trick scene, a giant CGI creature fills the entire frame as it walks past.

But at least these changes are all aesthetic. The Jedi mind trick scene might be interrupted by a hideous-looking alien, but Alec Guinness’ wry line delivery remains intact. Obi-Wan is the same character in the Special Edition as he is in the theatrical cut. In Han’s blaster duel with Greedo, on the other hand, the Corellian scoundrel’s characterization is impacted by the egregious Special Edition changes.

In the 2020 book The Star Wars Archives: 1999–2005, Lucas defended the “Greedo shot first” edit by saying, “I never designed Han to be a ruthless killer. All the good guys shoot in self-defense.” This is a valid point, of course – how can the audience get on board with Han being a hero if his introduction makes him out to be a cold-blooded murderer? But the original version of the scene doesn’t make Han look like a cold-blooded murderer; rather, it exemplifies his cunning.

When we meet Han, he’s a pirate who owes money all over the galaxy, scraping by with a ship that’s past its prime. When Greedo holds Han at gunpoint and Han still manages to get the drop on the Rodian bounty hunter, it’s clear that Han has avoided his creditors by constantly staying one step ahead of them. He anticipates Greedo pulling the trigger before he actually does it instead of blindly relying on the one-in-a-million chance that when he fires, he’ll miss at point-blank range.

If Greedo pulls the trigger before Han, that means one of the most feared bounty hunters in the galaxy is such a bad shot that he can miss someone from across a small table. Instead of anticipating Greedo’s next move and taking swift action to ensure his own survival without losing his cool for a second, Han just got really lucky.

Han shooting first is straight out of a classic western. A bounty hunter confronts a cool-as-ice cowboy in a saloon full of fellow ne’er-do-wells and holds him at gunpoint in a shady corner booth. While they talk about Han’s debts to Jabba, he distracts Greedo with some sleight-of-hand misdirection as he slowly reaches for his blaster under the table, then he draws his gun and fires on Greedo before the bounty hunter has a chance to fire back. That’s much cooler and more characteristic of Han than Greedo beating him to the punch, only to miss him from three feet away in a million-to-one fluke, allowing Han to take his own shot.

Disney’s “MacClunkey!” addition isn’t quite as egregious as Lucas adding in a sneaky shot from Greedo’s blaster before Han takes his own shot, but one has to wonder why they would change the most controversial scene in the movie and avoid the one change that Star Wars fans are clamoring for. Just restore the original version of the scene, or at least give streaming audiences that option.

MORE: Return Of The Jedi Was The Perfect Ending For The Skywalker Saga