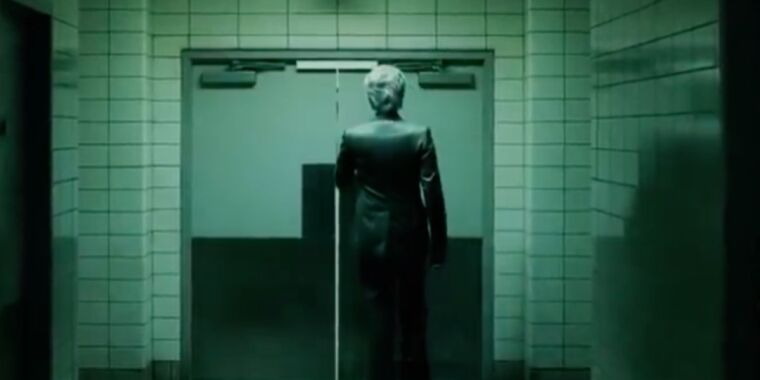 Our favorite psychokinetic, Eleven (Millie Bobby Brown), might be confronting her childhood tormenter and “Papa,” Dr. Martin Brenner (Matthew Modine), in the fourth season of Stranger Things, based on a brief one-minute teaser that was just released. We knew it was coming, since an initial teaser appeared yesterday, featuring a simple piano score and a wall of TV screens, cutting between static and brief images. The YouTube description simply read, “Due to technical difficulties, Hawkins National Laboratory will be closed until further notice. We will be back in service tomorrow at 9:00AM ET.”

(Some spoilers for prior seasons below.)

Series creators Matt and Ross Duffer (collectively, the Duffer Brothers) already hinted that S4 would open up the storytelling to include plot lines outside of Hawkins, with the Russians and their captive Demogorgon playing a major role. A mid-credits scene following the S3 finale showed two Russian guards approaching a prison door. “Not the American,” one guard says. Instead, the guards drag off a Russian prisoner and lock him in a room with a captive Demogorgon, which proceeds to devour the screaming prisoner.

There was much online speculation that “The American” was a reference to fan-favorite Jim Hopper (David Harbour), who somehow survived the S3 explosion back in Hawkins. We never saw a corpse, after all. A teaser released last January confirmed it, set in a military encampment in the winter wasteland of Kamchatka, Russia. The camera showed a long line of chained prisoners working on railroad tracks and then focused on one prisoner, who pushed back his hood to reveal Hopper with a shaven head.

That teaser came with a Duffer Brothers statement conveying their excitement to finally be starting S4 production—an excitement that proved short-lived, as the global pandemic shut everything down two months later. (The series resumed filming last September.) But the Duffers did offer some additional hints, adding that Hopper would “face dangers both human… and other. Meanwhile, back in the States, a new horror is beginning to surface, something long buried, something that connects everything.”

The entire regular cast is returning along with Harbour, Brown, and (one presumes) Modine: Winona Ryder, Finn Wolfhard, Natalia Dyer, Noah Schnapp, Charlie Heaton, Joe Keery, Caleb McLaughlin, and Sadie Sink. Maya Thurman-Hawke returns as Robin, Brett Gelman will be back as Murray Bauman, Cara Buono returns as the Wheeler matriarch, and we’ll be seeing more of Priah Ferguson, who plays Lucas’ sassy younger sister, Erica (“You can’t spell ‘America’ without Erica”). There will also be a number of new faces. Robert Englund (of Nightmare on Elm Street fame), Jamie Campbell Bower, Eduardo Franco, and Joseph Quinn are all joining the cast, along with Sherman Augustus, Mason Dye, Nikola Djuricko, and Tom Wlaschiha.

The new one-minute teaser brings us back into the secret laboratory for “gifted” children (The Rainbow Room), with young kids participating in various cognitive tasks. A shadowy figure, shown only from the back, enters the room and is greeted as “Papa.” This may or may not be a flashback. But next, we hear a voiceover say, “Today, I have something very special planned for you,” followed by, “Are you listening, Eleven?”

The final shot is a close-up of Eleven’s eyes popping wide open. Clearly, Brenner is trying to reach his star pupil through her psychokinetic abilities.

As marketing attempts go, the teaser is fairly disappointing, with additional details thin on the ground. But I’m pleased we may be exploring the storyline of the other gifted children exploited by Brenner over the years. Hopefully, we’ll see the return of S2’s Kali (Linnea Berthelsen), aka “Eight.” That entire S2 standalone episode (“The Lost Sister”)—where Eleven briefly runs away from Hawkins and ends up in Chicago with a merry band of outcasts who use their abilities to commit crimes and take revenge on those who imprisoned them—had to be leading to something other than teaching Eleven a bit more about controlling her formidable gift. Kali also told Eleven that Modine’s Brenner was still alive.

There’s no specific date yet for the return of Stranger Things, but it’s most likely to be sometime in 2022.