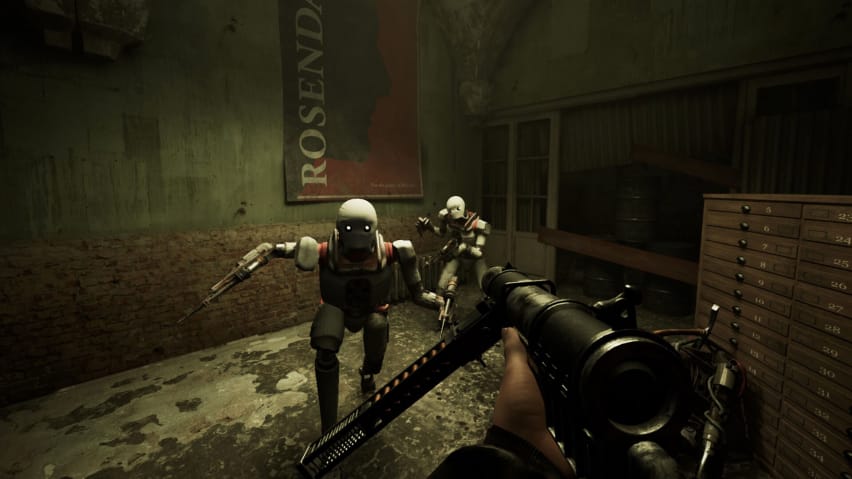 Developer Bleakmill and publisher Headup Games have announced an Industria release date. The surreal first-person shooter is hitting PC via Steam, Epic, and GOG later this month, promising to blend a deep narrative with satisfying gunplay.

Set in 1989 on the eve of the Berlin Wall’s fall, you are scientist Nora, who is attempting to find her lost lover. You’re drawn into the parallel world of Hakavik, in which brutalist architecture is the backdrop for strange technology and homicidal robots. You’ll need all of your weapons and wits about you if you’re going to unravel the mystery of Industria. There’s more than a tinge of the cyberpunk horror of System Shock to this one, so fans should check it out.  Along with the release date announcement, Bleakmill also released a brand new Industria trailer, which you can check out below.

Industria will arm you with four guns and a melee weapon to deal with the robotic threats that prowl the city of Hakavik. According to Bleakmill, Industria‘s first focus will be story. While it will have some exciting action sequences, the game is mostly a narrative experience, so the combat will “drive the player through the narrative”, according to a press release. Bleakmill co-founder David Jungnickel says Industria will boast “streamlined…mechanics and experience” alongside its ambitious storyline. It sounds like if you’re looking for another boomer shooter to coast through, this won’t be the one.

When is the Industria release date?

Get ready to pull that pre-order trigger. The Industria release date is September 30th across all storefronts. It’s launching on Steam, GOG.com, and the Epic Games Store, so you’ve got your pick of where to get it from. Publishing duties on Industria are being handled by Headup Games, which was acquired by Thunderful Games earlier this year. The game will be Bleakmill’s first development effort.

Industria launches for PC on September 30th. We still don’t know whether it’s going to get a console release or not; presumably, that will depend on how it performs on PC. Be sure to wishlist it and check it out if you want to see it do well. You can also follow the developers on Twitter for further updates about Industria. We’ll be watching this one with great interest.

Disclosure: TechRaptor works with GOG.com for affiliate partnership. We make a small commission from some links in this article.

Are you looking forward to checking out Industria? Let us know in the comments below!