Home » Tetris Effect on Switch Trades Nearly Nothing for Its Portability

Tetris Effect on Switch Trades Nearly Nothing for Its Portability 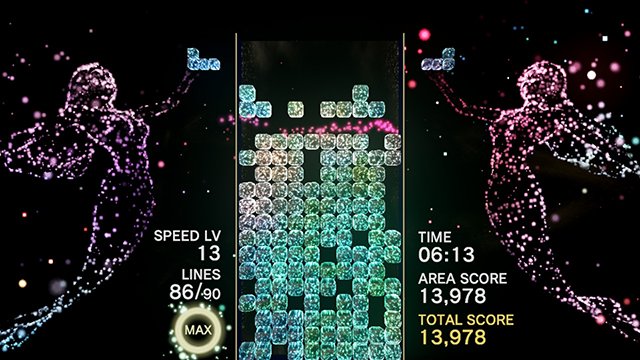 Switch ports almost always come with a sacrifice. It’s old hardware so there’s always some sort of drawback when compared to PCs or the other consoles, be it load times, visual fidelity, resolution, or all three. However, some games don’t have those trade-offs, like the recent Tetris Effect Switch port, which is still mostly the same exact game, but on a more puzzle-oriented platform that is made for shorter play sessions.

Tetris Effect obviously does not have the capability to run at ultra HD resolutions as it does running PC and consoles nor does it have an HDR-ready screen. The Switch in its current state is not capable of that so, on a technical level, can’t keep up with those other versions of the game.

But Tetris Effect still puts such a beautiful, particle effect-heavy sheen on the classic puzzle game and having less of that doesn’t suddenly turn the game into its famous older brother on the Game Boy. There is still enough Tetris Effect here that still shines on the smaller screen. Level backgrounds look great and still explode accordingly when lines are cleared. The music sounds fantastic, especially with headphones (except for the handful of tracks that were always weak). Load times are also remarkably fast, meaning that players aren’t stuck staring at a blank screen while they wait for the next stage to boot in.

It remains visually and aurally fantastic, despite the slight step down, but the Switch does gain ground in one area: portability. This is something that applies to every Switch and is why people often put up with watered-down ports; the ability to play in bed sometimes edges out the need for the most advanced graphics and performance. Doom Eternal’s least great version is on the Switch, but ripping and tearing while lying on the couch is more appealing at certain times.

But shooters aren’t made for portable platforms like puzzle games are. Puzzle games are generally undemanding, can run on most systems, and can be played in quick bursts. The portable nature of the Switch makes it easy to pick up for 10 minutes and get through a few stages before moving on and its simple art style doesn’t downgrade so noticeably. This is what makes Tetris Effect on the Switch better than most ports; it’s part of a genre that works with the strengths of the hardware rather than working against them. The Switch port doesn’t have many new noteworthy features, though. It’s mostly the same exact game with an almost identical feature list that can be seen on other platforms. However, it does support full crossplay and HD rumble that vibrates accordingly when moving around Tetriminos, the latter of which will be lost on Switch Lite owners.

RELATED: How Back 4 Blood Is Trying to Build the Biggest Audience Possible

Tetris Effect on the Switch still has the same problems. Some songs suddenly jack up the tempo in a way that ruins the flow and doesn’t match the beat. The Zone power-up is utterly useless for people not chasing scores and is limiting. Mistakes are often overly punishing. But despite its annoying flaws that are in every version, this port still offers a visually pleasing version of the puzzle game that works in tandem with what the Switch is already good at: being a portable experience that is often best enjoyed in short sprints. Tetris and Nintendo handhelds have had a long history together and Tetris Effect makes it clear why that still works today.