The 10 Fighting-types With The Highest Attack Stat 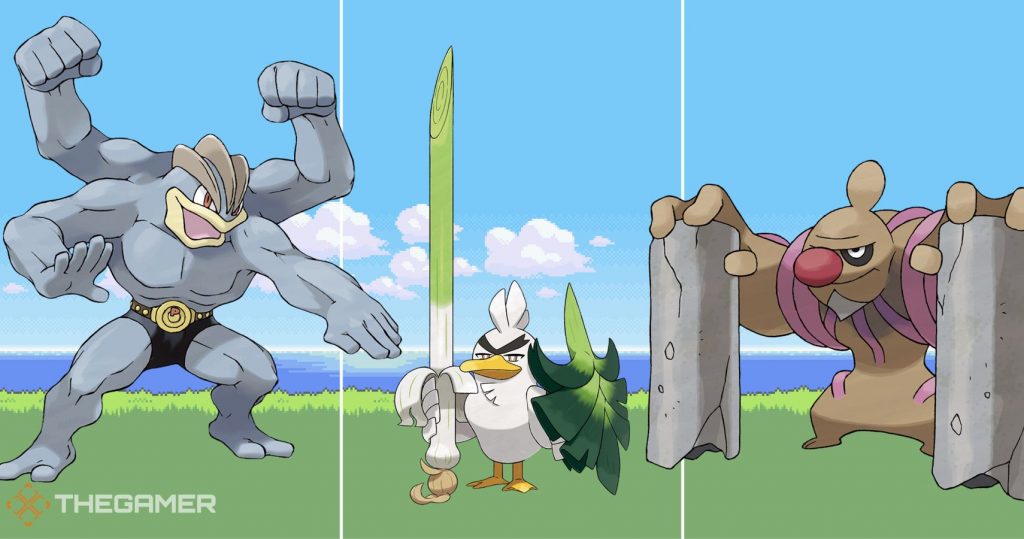 Fighting-type Pokemon are known for their massive physical Attack stats, but these ones are the best of the best.

Of all Pokemon types, the Fighting-type is the one generally lauded most for the heavy amount of physical damage it can deal out to opposing Pokemon. This is because Fighting-type Pokemon tend to have a very high Attack stat, often trading off special or defensive stats to justify that high level of Attack.

RELATED: The Strongest Pokemon Ash Ketchum Has Caught In Each Region

Machamp is the Superpower Pokemon that evolves from Machoke through trade, which evolves from Machop at Level 28. It comes from Generation I and the Kanto Region. It was famously used by the Elite Four member Bruno.

It is currently classified as Never Used in Smogon University, which is the standard that most competitive Pokemon players use. Its base Attack is 135 and can max out at 394.

RELATED: The Strongest Poison-Type Pokemon You Can Catch In Each Region, Ranked

Sirfetch’d also falls under the NU category on Smogon. Its base attack is also 135 but can max out at 405.

Pheromosa is an Ultra Beast from Generation VII and the Alola Region. It’s a Bug-Type Pokemon in addition to a Fighting-type. It’s classified as the Lissome Pokemon. It doesn’t evolve from or into anything.

Pheromosa is in the Uber tier in Smogon, which is usually reserved for Legendary Pokemon. Its base Attack is 137 and maxes out at 410.

Buzzwole is another Ultra Beast Pokemon from Generation VII. Like Pheramosa, it’s also a Bug- and Fighting-type. It’s classified as the Swollen Pokemon and doesn’t evolve from or into anything.

It’s also classified as an Uber under Smogon competitive rules, but it can be specced for use in the OverUsed tier. Its base attack is 139 and maxes out at 414.

Conkeldurr is the Muscular Pokemon and originates from Generation V and the Unova Region. It evolves from Gurdurr through trading, and Gurdurr evolves from Timburr at Level 25. Conkeldurr is actually the last Pokemon on this list that can be used in the current generation of games, Sword & Shield. The rest of these Pokemon were removed from the series in Generation VIII.

Conkeldurr falls under the UnderUsed tier in Smogon, but it has made some in-roads to the more powerful OverUsed tier. Its base Attack is at 140 and maxes out at 416.

Mega Lucario is the Aura Pokemon and is a Steel-Type in addition to being a Fighting-Type. The rest of the Pokemon discussed will be Mega Evolutions, as they were such a dominating force in Pokemon after being introduced. One of the reasons for this is their incredible stats, but they were phased out for now with Generation VIII.

Lucario was introduced with Generation IV in the Sinnoh Region, though Mega Evolution wouldn’t be introduced until Generation VI and the Kalos Region. Lucario evolves from Riolu through maxed-out happiness and leveling up during the daytime. Like most Mega Evolutions, Mega Lucario qualifies as an Uber under Smogon rules. Its base Attack is 145 and maxes out at 427.

Mega Blaziken is the Blaze Pokemon and was introduced with Generation III in the Hoenn Region. It evolves from Combusken at Level 36, which in turn evolves from Torchic at Level 16. Mega Blaziken is one of the three Starter Pokemon from Hoenn and is a Fire-type in addition to being a Fighting-type.

Mega Blaziken is another Uber and has a base Attack of 160 that maxes out at 460. May famously had a Blaziken of her own in the Pokemon anime.

Mega Gallade is the Blade Pokemon and is a Psychic- and Fighting-type. It evolves from a male Kirlia after it is exposed to the Dawn Stone, and Kirlia evolves from Ralts at level 20. Gallade was introduced with the Sinnoh Region in Generation IV.

RELATED: Pokemon: Ranking The Games Based On What Pokemon Were Available Before The Elite Four

Mega Gallade falls under the UnderUsed tier unlike many of its Mega Evolution contemporaries, but its base Attack is 165 and maxes out at 471.

Mega Heracross is the Single Horn Pokemon and hails from Generation II and the Johto Region. It doesn’t evolve from or into anything, and it was famously used by Ash Ketchum in the Pokemon anime. It is a Bug- and Fighting-type Pokemon.

Heracross falls under the UnderUsed tier despite its monstrous Attack stat. Its base Attack is 185 and maxes out at 515.

Finally, there is Mega Mewtwo X. Mewtwo is a Legendary Pokemon that is usually only a Psychic-Type, but its X Mega Evolution form raises its Attack stat and turns it into a Fighting- and Psychic-type. It comes from Generation I and the Kanto Region, and it’s a clown of the Legendary Pokemon Mew. It’s classified as the Genetic Pokemon and famously starred in the first Pokemon movie.

NEXT: Pokemon: Everything You Need To Know About The Great War Theory


Next
Pokemon: The Highest Average Stat Per Type