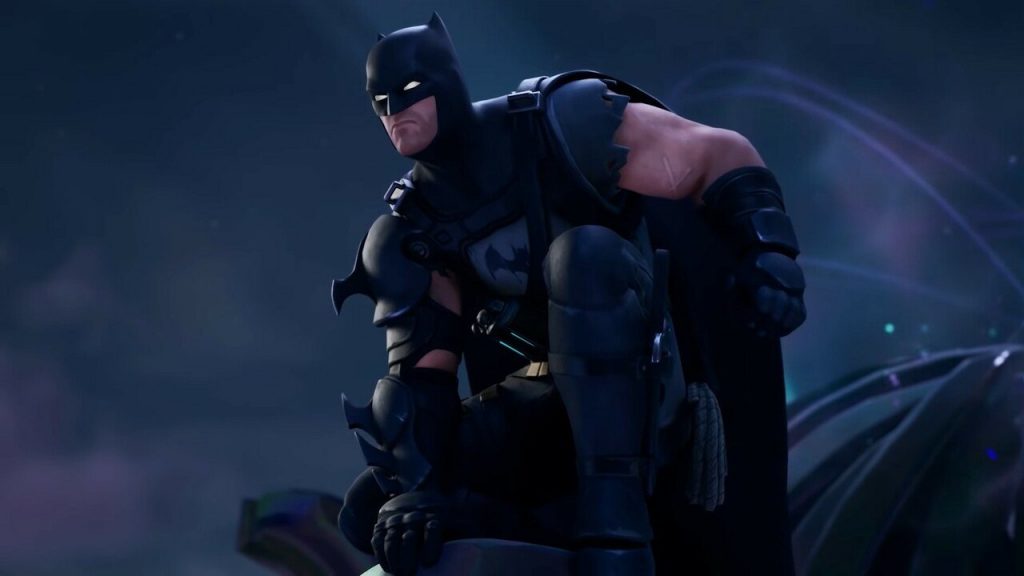 Have you seen Memento? If not, you should rectify that sharpish; it’s one of Christopher Nolan’s best and comes from a time before you needed three viewings to get a handle on his movies. In it, Guy Pierce’s Leonard is trying to solve a grisly mystery — a task made considerably more difficult by the fact his short-term memory resets every few hours and he forgets everything that’s happened since a traumatic accident which caused his condition.

Yes, yes, but what’s that got to do with this Batman / Fortnite thing, you ask? Well, in this new crossover comic book series it seems that ol’ Bats finds himself dropped on Fortnite Island with severe memory loss and stuck in a 22-minute time loop. Much like Leonard, the World’s Greatest Detective takes to scrawling notes on his person to try and make sense of the mystery — all while doing battle (royale) in a fight for survival, of course. Take a look at the launch trailer above for a better idea.

This cross-media collab between DC Comics and Epic Games is called Batman/Fortnite: Zero Point, and the first issue of the comic book was published yesterday (20th April), with the final in the six-part series lined up for release on 6th July. Each issue comes with a redeemable code for “bonus DC-themed Fortnite digital items inspired by the events in the comic”.

The first is a Rebirth Harley Quinn Outfit — shown in the pic below — which is only available by purchasing the comic physically or via a paid subscription to DC’s US-only DC Universe Infinite service. All upcoming items will also appear in the in-game item shop on the same day as the comic books launch, though. Redeeming all six codes from every issue will unlock an Armored Batman Zero Outfit, too.

If you’re looking for a little more story flavour, here’s some blurb from the horse’s mouth:

A crack splits the sky above Gotham City… a tear in reality itself. This rift pulls the Dark Knight into a bizarre and unfamiliar world, with no memory of who he is or where he came from… DC’s Batman has been drawn into Fortnite! As our hero fights to recall his past and escape an endless loop of chaos and struggle, he’ll come face-to-face with the likes of Renegade Raider, Fishstick, Bandolier, and more. While the World’s Greatest Detective strives to make sense of this strange new world, he’ll uncover the shocking truth about the Island, what lies beyond the Loop, and how everything is connected to the mysterious Zero Point. Uncover secrets never before revealed in-game or anywhere else! Every fan of Batman, Fortnite, stunning art, and edge-of-your-seat excitement won’t want to miss the Caped Crusader facing off against Fortnite champions on the Island in a desperate attempt to save not only himself but other familiar faces from the DC universe… and perhaps the Multiverse too!

If you’re wondering when the other issues are scheduled to release, here are the dates courtesy of Epic Games’ site (which has more details on how to redeem codes, plus your usual T&Cs and some previews of the covers):

With the huge host of guest stars dropping into the battle royale over the past few months (including such luminaries as The Mandalorian, Ripley from Alien, and Ryu and Chun Li, it’s pleasant to see DC and Epic having some fun and trying something a bit different with this latest crossover. We can’t say we’ve ever given too much thought to the narrative reasons behind the endless cycles of cartoon ultraviolence that play out after we thank the driver and parachute onto the island, but it’s nice to see Batman taking the whole thing seriously, at least.

Have you read issue one? Or perhaps you think there’s zero point? Grab your nearest Bat-Pen and let us know below.