Home » The next Chivalry 2 update will add a ridiculous Brawl mode, a new sword, but most importantly: headbutting

The next Chivalry 2 update will add a ridiculous Brawl mode, a new sword, but most importantly: headbutting 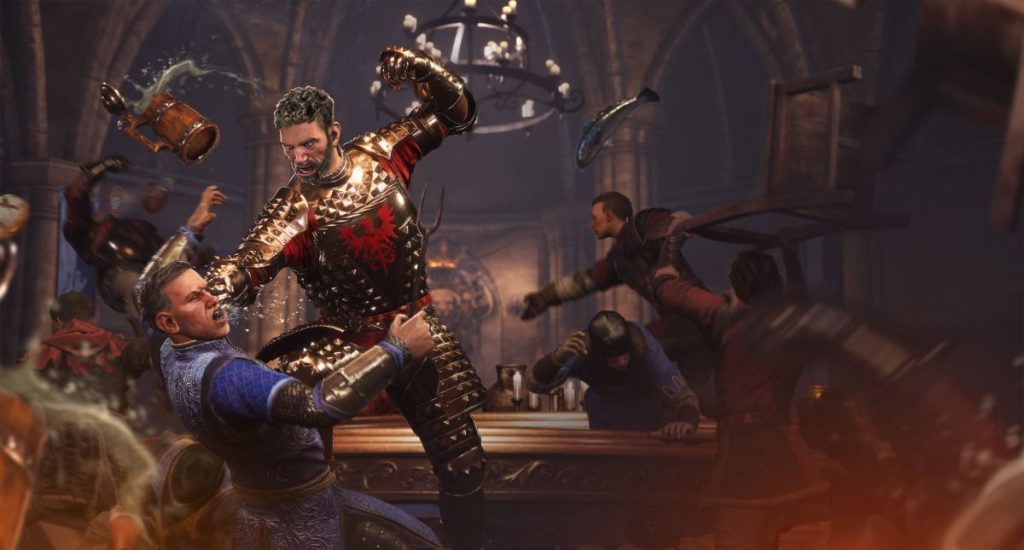 VIDEO: Exclusive gameplay of the new Brawl mode, coming before the end of the month.

Another Chivalry 2 update is due next week, just two months after the medieval dismemberment sim got a couple new maps along with new cosmetics and fixes. I loved the Desecration of Galencourt map that got added back in August, partly because it features the best status bar I’ve seen in a videogame, a “desecration meter” that appears as you clobber pristine statues and monuments.

In next week’s Fight Knight update:

It’s a nice spread of new things. The centerpiece of the update, Brawl mode, replaces medieval weapons with environmental objects you have to scrounge for: chairs, food, and bottles. This setup leans into Chivalry 2’s pleasant contradiction: it’s a fairly technical fighting game that defuses the frustration of dying with moments of slapstick.

“The new Brawl Mode is definitely peak ‘you can’t get mad at this game’ out of all of the various modes available in Chivalry 2,” brand director Alex Hayter tells me. “One minute you’ll be pummeling someone to death with a chair until it breaks into splinters… the next moment, someone kills you from behind with a sausage thrown from across the tavern. Thoughts about weapon balance—seeing as there are no real weapons like swords or bows—and optimizing your K/D ratio kind of go out the door when it’s just a deliberately stupid, silly mess of death.”

It’s also nice to see that quality-of-life updates are part of the package, and I’ll be interested to see what gets addressed there. The game’s developer acknowledged earlier this year that Chivalry 2 experienced some roadblocks as Torn Banner implemented an initial wave of fixes in July. One of the issues I had around that time was difficulty adding and playing with friends at launch, which has since been resolved.

“Making a game as big and ambitious as Chivalry 2 with a relatively small team comes with its challenges,” said Hayter. “We think we achieved what we set out to do by making the best medieval warfare game that we could envision. Still, we know we’ve got some hurdles to overcome to make even more players happy and we’re actively working on improving every aspect of the experience and feature set. Thanks to the success of Chivalry 2 we’ve been able to substantially grow our team at Torn Banner with insanely talented and experienced people to be much better equipped to do all of that.” Torn Banner tracks the game’s roadmap on a public Trello board.

The Last Team Standing mode may be the secret star of the update. I’m curious if this beloved mode from Chiv 1 holds up in the sequel. In theory, a no-respawns mode should inspire some tenser duels and tighter teamwork.

Oh, and about the headbutting: in another, er, nod to Monty Python and The Holy Grail, the move will only be available to you if you’ve lost both limbs, at which point it becomes your primary attack. Torn Banner seems to suggest that you can keep this up for awhile, potentially, if you’re somehow able to stay alive and keep slamming your skull into enemies. Good luck with that, Black Knight.

Again, we don’t know exactly which day the Fight Knight update will drop, but Torn Banner says to expect it next week to kick off ahead of Halloween.