Home » The state of Battlefield 2042: tank sniping, buff hovercrafts, and a ghost tower

The state of Battlefield 2042: tank sniping, buff hovercrafts, and a ghost tower 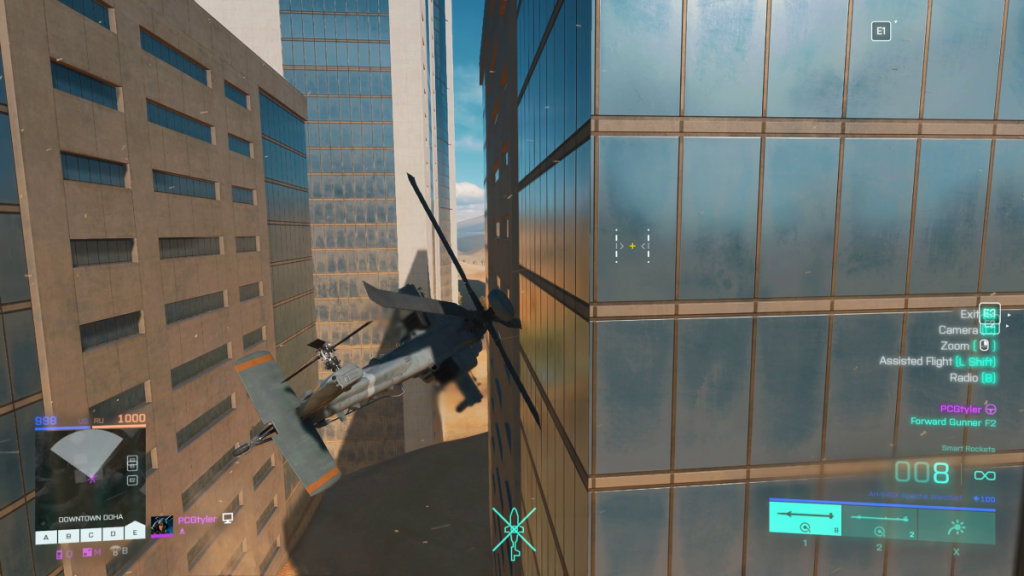 The latest odd discovery made by Battlefield 2042 players is a way to hide a helicopter inside a building. Nestled among the skyscrapers that dot one side of the Hourglass map is a squat office building with a solid roof and, it turns out, illusory sides. Helicopters can magically pass through the building’s walls, allowing pilots to conceal themselves by hovering at its center.

The ghost tower is located in an area that’s off-limits to players who aren’t in aircraft, and I don’t foresee trips to the office becoming an essential piloting tactic. In all likelihood, the big upcoming patches (which will apparently include over 150 individual map fixes) will solidify the building, but for players who are already disappointed by Battlefield 2042, it’s another bug to add to a big list of grievances.

The game hasn’t been received with much love. Battlefield 2042’s 40,000 Steam user reviews average out to a ‘mostly negative’ rating right now, and it’s been called a disaster by more than one publication. A lengthy list of perceived deficiencies is being copied-and-pasted around the web, creating the impression that Battlefield 2042 is quantitatively worse than its predecessors. In that context, every new bug or balance complaint, however obscure or surface-level, can be taken as a negative number that plunges Battlefield 2042 deeper into debt.

For example, players and press recently reacted to the destructive power of the NWT-50 sniper rifle, pointing out that the level 60 unlock can destroy tanks faster than the M5 rocket launcher. “Add it to the list of revive bugs, hit detection woes, and spawn glitches,” wrote Kotaku.

The M5 rocket launcher can feel disappointingly weak, but the missing context here is that the NWT-50 is a primary weapon, whereas the M5 is a gadget which can be carried alongside a primary weapon. The NWT-50 isn’t the best anti-infantry rifle, and picking it essentially makes you a specialized vehicle assassin, which honestly sounds pretty damn fun to me. There’s probably a way to tweak these two damage knobs to improve Battlefield 2042, and the NWT-50 will see a nerf in an upcoming patch, but the difference in power between a primary weapon and a gadget isn’t a bug or oversight, despite being presented as one.

Another balance complaint isn’t quite so complicated: Hovercraft are godlike. The dominance of inflated tubes is so obvious that DICE announced that it’s nerfing the floating fortresses last Friday, on the official launch day. Staff writer Morgan Park and I enjoyed a couple dominant Conquest performances the other day by gliding around in the decidedly OP but very fun air boats, at one point catching a ride in a tornado and gliding back to the ground unharmed. If you’re playing, I highly recommend going on a hovercraft spree while you still can: It’s getting an armor nerf later this week. The NWT-50 rifle will be nerfed sometime in December.

It’s normal for multiplayer shooters to get balance changes in their first patches, and continuously for as long as they’re being updated. Counter-Strike: Global Offensive, a game released in 2012, got a big gun balance update in April 2020. For me, part of the fun of playing a game at launch is experimenting with a meta that hasn’t yet been tested in the wild.

Where players fall on certain balance questions, such as whether or not it makes sense to let players spawn vehicles on roofs, may be less about competition and more about what kind of game they think Battlefield ought to be. I spent a lot of time practicing jet stunts in Battlefield 3 and catching air in Battlefield 2042 jeeps, so I come down on the side of silly, but perspectives differ. A complaint I’ve seen from other Battlefield fans is that 2042 doesn’t take itself seriously enough.

“Reminds me more of Mario Party than a war game,” said one Reddit poster, referring to a screenshot of “three hovercrafts on a building pushing each other like bumper cars in an amusement park,” which to me looks like a great time to me.

Players continue to report performance issues, as well. DICE acknowledged today that Battlefield 2042 is restrictively CPU bound, saying that some players with high-end hardware aren’t “seeing the benefit of consistent, high framerates.” I experienced some annoying framerate dips earlier today, but I’ve otherwise been fairly stable at around 80 fps on my RTX 2070 Super and Core i5-9600K. There’s work to do there, for sure.

I haven’t trudged through any big latency spikes lately, though there are weird, hard-to-reproduce issues that seem to happen to me randomly. At one point I was faced with a seemingly invincible player, and in a particularly frustrating moment, I was unable to throw a grenade after skydiving behind a tank with perfect form. Great maneuvers in Battlefield games can take a lot of patience, luck, and skill to pull off, so when apparent bugs ruin them, players are understandably angry. I know I get tilted by it, though these anomalies haven’t happened enough to ruin the game for me.

I find other bugs, such as hovercraft being able to drive up vertical walls, funny, and part of Battlefield’s rich history of creative vehicle play. For some, though, any deviation from expectation is more evidence that Battlefield 2042 was rushed, made incompetently, or that the developers are apathetic.

I don’t think the big list of grievances, which includes trivial things like “fewer achievements,” is really what’s causing so much disappointment. My read on it is that a lot of Battlefield 1 and Battlefield 5 fans are clashing with DICE’s decision to simplify the game for the sake of scale and to make it more playground-like, downplaying individual performance with a redesigned scoreboard and introducing specialist characters with unique gadgets, which can be most cynically viewed as mindless trend-chasing for the sake of future cosmetic sales. Starting from that place of conflict, bugs and balance complaints become evidence that something is terribly wrong this time, rather than the usual amount of wrong.

As someone who broadly likes the changes, Battlefield 2042 hasn’t been a “disaster” at all in my experience. (If it’s a disaster, then Call of Duty: Warzone was a black hole that sucked up the entire universe.) I think the specialists are a fun addition, which I elaborate on in my Battlefield 2042 review, although I also miss the old scoreboard. The negative reaction has been impossible for DICE to ignore, and the developer said in a blog post that it’s open to the return of what it calls “legacy features” to Battlefield 2042 in future updates.

“End-of-match scoreboard, server browser, and features like voice chat are big topics for us to cover all at once, and we have plenty we want to say around them,” said the developer.

At the same time, DICE announced a ton of changes and fixes that are coming in the next two patches. Whether that’ll change any minds remains to be seen, but it’s all good news for those of us who already like the game. Unless the updates somehow make it worse, which there’s precedent for: A certain Battlefield 5 patch was received so poorly that it was rolled back. I’ll hope for the best while I get a few more OP hovercraft runs in before the nerf.