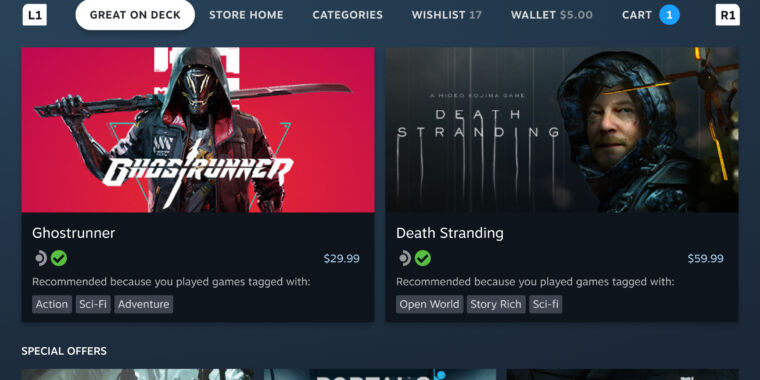 Valve says it has started the process of reviewing all of the tens of thousands of games in the Steam catalog for compatibility with the upcoming Steam Deck portable. The company is doing the review as part of a new informational program called “Deck Verified.”

Games that provide “a great, smooth experience” and “work great on Steam Deck right out of the box” will receive a green “Deck Verified” check mark on the Steam store and library interfaces. They will also appear on the default “Great on Deck” tab when the Store is viewed on the Steam Deck itself. Games will receive that check mark if they meet the following criteria:

Games that don’t quite reach the Verified ideal can still earn a yellow “Playable” badge if they run but “require some extra effort to interact with or configure.” That includes games that require manual controller or graphics configuration on first launch, games with “missing or inaccurate controller glyphs,” and games where players need to use the touchscreen for whatever reason.

Other games will simply be listed as “Unsupported” on Steam Deck. Those include all virtual reality games and games that are incompatible with Proton (the latter group will have any compatibility issues logged by Valve to fix going forward). Games that haven’t yet been reviewed for Steam Deck compatibility will simply have their compatibility shown as “Unknown” in the Steam interface.

Steam developers can request a Steam Deck compatibility review for their games manually, but some back catalog games that “Valve identifies… as important to Steam Deck customers” will be added to the review queue “based on automated heuristics.”

The review process should take about a week, according to Valve’s estimates (subject to demand), after which developers will receive “detailed point-by-point results” of the review. After that, developers will have an opportunity to fix any outstanding issues and request a re-review before the results are published. Otherwise, any results will be automatically published after a week. Titles will be re-reviewed “as the developer releases updates or the Deck’s software improves,” Valve says.

While players can hook up the Steam Deck to a monitor and use a mouse and keyboard, Valve writes that “we believe most customers will be treating the Deck like a handheld appliance, most of the time.” The Deck Verified program will thus be focused on how games work when the Steam Deck is being used without any external peripherals.

Despite that, Valve’s developer guidelines make clear that “customers browsing the Steam store on Deck aren’t prevented from viewing or purchasing content that may not work well on their device… You’ll always have the option to run whatever you want on Steam Deck. After all, it’s your Deck.”

Back in 2013, when Valve first tried to target console gamers with its Steam Machine hardware initiative, we suggested that the company roll out a certification program to set minimum standards for which games would run well on the wide variety of SteamOS-based hardware. The Deck Verified program fulfills some of that promise and should make it easy for Steam users to figure out how much of their library will work with this new Steam hardware at a glance.