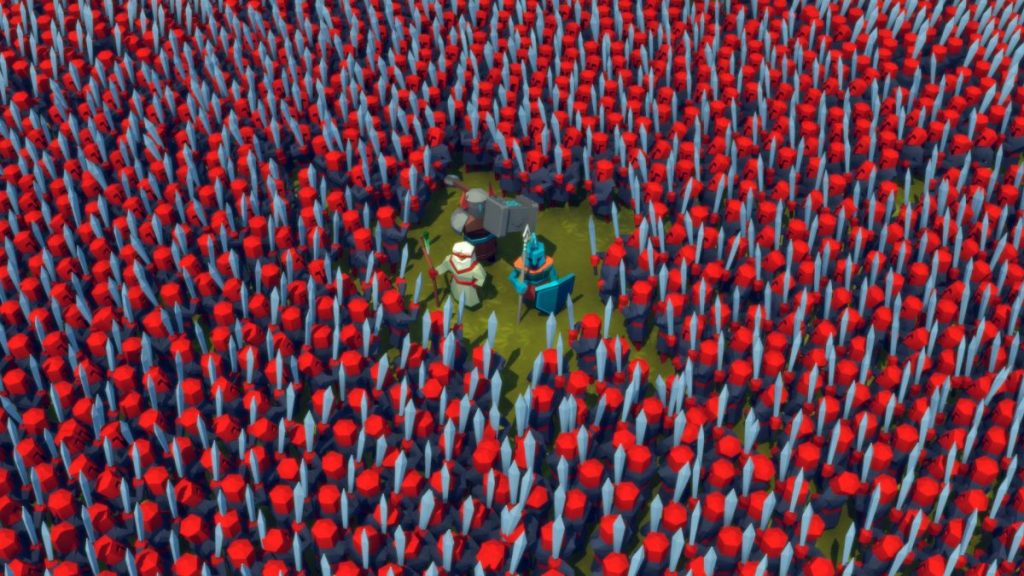 Diplomacy is Not an Option definitely lives up to its name. Within 10 minutes of playing the demo’s wave survival mode, I was raining arrows and thrusting spears into a small horde of rebel bandit scum. At no point did I need any reinforcements to protect my mighty wooden gate, but I had the magic points to instantly call down an army of hulking dark knights from the heavens, so I figured why not?

At its heart, Diplomacy is Not an Option is more tower defense game than real-time strategy. In your randomly generated low poly kingdom, you’ll quickly build up your realm from a small village to a stone-walled fortress, placing houses, barracks and storage facilities, hospitals, cemeteries, and plenty more.

As the name suggests, DINAO forgoes cultural and political gameplay of other strategy games for a simplistic city-building loop, a welcome change as someone who sweats every tax policy change in Civ or Crusader Kings. You need houses to create workers, berries and fish to feed everyone, lumber and stone to build everything, cemeteries and gravediggers to bury the occasional plague-ridden corpse, an army, watchtowers, and high enough walls to give them a fighting chance.

There’s a research tree that unlocks stone walls, more efficient builders, faster porters and such, but it’s a pretty dang small progression compared to the multi-page trees of Civ. I enjoyed figuring out how to best arrange my buildings to establish different districts, thinking it’d be easier to protect my subjects’ homes if they were centrally located, and how far out I could realistically build my walls without incurring the wrath of bandits hidden by the fog of war. Imagine my shock when my city turned out to be a fairly autonomous, efficient machine rather than the nightmarish capitalist hellscapes of other strategy games.

The star of the show, however, is the inevitable battles between massive waves of grubby “rebels” and your own spearmen, archers, and the occasional laser beam from space. Diplomacy is Not an Option’s wave-based survival mode gives you a three-minute heads up on when a particularly large group of rebels is making its way towards your city. You can of course pause time to dwell on decisions, but like it or not, they’re going to do everything they can to tear down your walls and murder villagers stuck on the outside of your gates. Thankfully, there’s an evacuation button that automatically makes every non-combatant flee for your central castle.

When it comes time to clash swords, ideally you’ve got your archers lined up on the ramparts and watchtowers, a couple of catapults lobbing stones over the walls, and battalions of swordsmen standing at the ready. As well as DINAO plays, it can be a chore to move individual units around, like displacing archers from their watchtower perch to the ramparts. You’ll have to click on the unit, then select the “move to” button, then right click where you want to move them to on the ground, rather than another part of the wall. It’s just an added step that overcomplicates tense battles.

Diplomacy is Not an Option will feel familiar to RTS vets, but it also feels like a sandbox god game when you activate one of the ridiculous destruction options. If things get really dicey, those aforementioned dark knights can be instantly summoned anywhere on the map to shake things up. Building a magic obelisk in town unlocks a god ray that will cook anything it touches. If the bodies in your cemetary are feeling overly disturbed, they’ll rise from the dead and start feasting on whatever or whoever is closest. Like WorldBox before it, I wouldn’t be surprised if you could one day press a button to summon a giant crab kaiju. Even your villagers occasionally acknowledge their powerless indifference to being ordered around by your invisible hand, making glib remarks like a bored teen.

This absurdity really pops off during bigger fights. Thanks to Diplomacy’s low-poly art style and relatively low number of unit types, it can jam a crapload of little soldiers on the screen, Total War-style. The result is screen-filling armies slamming into one another and leaving piles of bodies behind in their wake, like the aftermath of a Totally Accurate Battle Simulator match.

I’m usually one to chicken out on grand strategy games because of how broad and complicated their systems can be, even in character-driven games like Crusader Kings 3. Diplomacy is Not an Option manages to blend elements of tower defense, Command & Conquer’s fast-paced action, and resource management without ever feeling overwhelming. I love that I never have to pause in the middle of a fight to worry about tax statutes or which of my spouses is secretly sleeping with the nobles behind my back.

Diplomacy is Not an Option is releasing in January 2022 in Early Access, but give the demo a shot to see if it scratches that strategy itch. The Early Access build will contain two campaign missions, the wave survival mode, and most of the upgrades and research skills. Developer Door 407 says they plan to finalize the campaign mode, add missions, diversify units and buildings, and improve the interface.

While you wait for the demo to download, check out the best strategy games on PC.