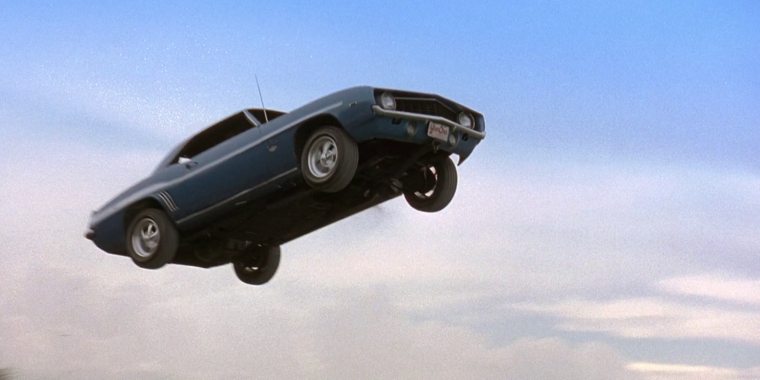 As we previously learned, once a week for this series is arguably a saner way to devour so much vehicular mayhem than the four-day gauntlet we endured—and we’ve resurfaced that 2019 article below. If health or safety precautions make Universal’s latest promotion inaccessible to you as of late, never fear: we’re riding again, much like the Duke boys, with a look back at all the engine-gunning, Corona-drinking, window-smashing fun so that you don’t feel left out.

As of last week, I had never seen any movies in the Fast & Furious franchise. I probably missed the first one in 2001 because I was planning my wedding or something else equally pedestrian. Then, before I knew it, there were seven more, and I had no chance of catching up.

But now the franchise has lasted longer than any of our president’s marriages and has just birthed its first spin-off feature. So I have taken it upon myself to shotgun all eight movies in four days and report back to you what they have taught me about cars.

For the uninitiated, F&F more or less follows the car-crashing bromance of two shredded dude-bros played by Paul Walker and Vin Diesel. The former is a cop-turned-crook-turned-cop-turned-vigilante secret agent. The latter is a street-racing crook who eventually—well, look, there isn’t really a job description for what these guys end up doing by the end of the series. When not racing or knocking heads, their relationship consists of Diesel dispensing blue-collar wisdom in a monotone while Paul Walker stares adoringly.

In order to truly understand their relationship, I’ve ordered the movies below by following the series’ internal chronology. Yes, this differs from the release dates. Just because these movies go real fast doesn’t mean they always move in a straight line.

The single-minded devotion of the first two films to their meathead aesthetic is astounding. Every car gleams. Every man spends as much time at the gym as the women spend waxing. The world is bereft of body fat or ugly people. The only sentences that don’t end with “bro” end with “man” or “dude.” Everything is “by Christian Audigier.” (Not just the clothes; possibly the dialogue, too.) One of Vin Diesel’s jacked homeys wears two tank tops at the same time. Hip-hop and jock jams blast continually from every orifice.

The Fast and the Furious is tightly paced and plotted, which is to be expected for what is essentially a remake of Point Break. Just replace the cars with surfboards and Vin Diesel with Houston’s own Patrick Swayze (did I ever tell you I went to junior high with his cousin?).

Sure, Vin Diesel uses a 1993 Honda Civic EJ1 for his heists, but that’s not where his heart is. He’s all about family and community—which means American muscle cars like the 1970 Dodge Charger R/T his father left him. It’s no surprise that Walker’s undercover cop is so drawn to VD: the cop has no past, no roots, and no relationships. As such, Walker prefers foreign cars, including a 1995 Mitsubishi Eclipse RS that gets machine-gunned by gangsters and a 1995 Toyota Supra Mk.IV JZA80 that he gives to Vin Diesel as a part of a previously established bro-code that I won’t spoil for you (spoiler: it’s ultra bro-y). The dichotomy presented in the movie is true for all cultures across all time: do we stick with our traditions, no matter how ungainly, or do we become more adaptive, agile, and fuel efficient? Dude, heavy.

What I learned about cars: Going fast will turn your ride into a light cycle from TRON.

The hot rods in The Fast and the Furious are tricked out with tanks of magic juice—like, liquid Schwartz or something. The juice makes them go so fast that the world gets all blurry. Maybe it’s cough syrup? Whatever the stuff is, I’ll see if I can pick some up later at AutoZone for my 2001 Corolla.

And now we come to 2 Fast 2 Furious, the most ridiculous (and therefore best) title for a sequel. It joins Electric Boogaloo as a punchline for all potential sequels from now until the heat death of the universe. Possible examples include 2 Call 2 Name, 2 Temptation 2 Christ, and The Passion of Joan of Arc: Tokyo Drift.

The plotting in 2 Fast isn’t as tight, but this is also the most whimsical of the series. It has to be—it’s called 2 Fast 2 Furious. The trash-talking chemistry between Walker and singer-turned-actor Tyrese is a delight, and Tyrese’s knowledge of different ways to say “bro” (“brah, “breh,” etc.) is encyclopedic. When Walker and his old frenemy Tyrese reunite for the first time, director John Singleton (Boyz n the Hood) shoots their graceless scuffle in a Buster Keaton-esque longshot while an FBI guy has a snack. They eventually agree to go undercover for the Bureau in exchange for having their criminal records cleared. Remember that phrase “criminal records cleared,” because you’ll only hear it 1,584,925 more times in the next 13 hours.

Even as Walker reluctantly hints at his past, he still prefers slick, modernist cars from far-off places. That includes the 1999 Nissan Skyline GT-R R34 he drives to feed his racing addiction and the 2002 Mitsubishi Lancer Evolution VII that he uses on behalf of the FBI. Being his friend from Way Back, Tyrese also goes Japanese, although he prefers a 2003 Mitsubishi Eclipse Spyder GTS convertible in “look-at-me!!!” purple. And when the time comes for “the Dukes of Hazzard shit” stunt Walker pulls at the end, he drives a 1969 Yenko Camaro SYC, perhaps in tribute to Vin Diesel.

What I learned about cars: Yelling makes you go faster.

No, yelling at the car doesn’t make it go faster. That would be ludicrous. (Though that would be fitting, since Ludacris co-stars.) I mean yelling while you’re driving. Despite being in different cars and often miles apart, Walker and Tyrese can’t stop shouting smack at each other. It’s wonderful.

When Paul Walker showed up for his henchman audition in 2 Fast 2 Furious, he wore shorts and a West Coast Choppers T-shirt. But when we first see him in Fast & Furious, he’s wearing—groan—a suit. WTF? Does removing all the definite articles in the movie’s title grant instant sophistication?

Turns out Fast & Furious was intended as a “soft reboot.” Parts one, 2 Fast, and three are all about street-racing and cranking the bro-speak dial to 11 (we’re skipping part 3 for now, stay with me). Meanwhile, characters still occasionally have to pay for things. But with Fast & Furious, the franchise shifts to multimillion-dollar heists around the globe, while Our Heroes can seemingly pluck cars, guns, and computers from the nearest tree.

In Fast & Furious, Walker (who skipped Tokyo Drift) reunites with Diesel (who skipped parts two and three) and helps him seek vengeance for VD’s murdered love interest. That role is played by Michelle Rodriguez and—spoiler alert!—she has one of the least-convincing off-screen deaths in cinema history. Drug dealers, FBI guys, and vehicular mayhem ensue. And Ludacris has gone from being a neighborhood mechanic to a world-class hacker. (I assume Luda’s character runs mv bitch regularly.)

The indistinguishable American ’70s and ’80s muscle cars that Vin Diesel drives in Fast & Furious can be best described as “GRRRR MANHOOD!!!” Paul Walker has the 2002 version of his beloved Nissan Skyline GT-R as well as a 2009 Subaru Impreza WRX STi GH.

What I learned about cars: Sometimes you don’t have time to roll down a window.

Despite tricking out his dad’s 1970 Dodge Charger (and then tricking it out again after it gets wrecked), Vin Diesel never installs power windows. Either they slipped his mind or blah-blah-blah “staying true to your roots.” So when he urgently needs the driver-side window down during a car chase, he puts his elbow through it. His arm is fine. Meanwhile, I bumped my foot on my AC adaptor while typing this and now I’m bleeding.

(BTW, can you picture anyone calling him “Vin” or “Mr. Diesel”? I imagine he’s always “Vin Diesel” to everyone all the time, the way no one ever said “John” or “Mr. Wayne.”)

Maybe my brain was turning to car-crash mush by this point in the marathon, but Fast Five left me dizzy in the backseat with its bonkers plot. Vin Diesel has collected enough sidekicks to fill an NBA starting lineup. The movie has as many plot points as The Dark Knight or Heat, and it has more heists than those movies combined (I know comparing Fast Five to Heat is unfair because comparing anything to Heat is unfair). Also, I think someone gets pregnant, but I can’t be sure.

Remember in 2 Fast 2 Furious when Our Guys spend a solid 30 seconds saying “ouch!” after they’ve just crashed their car into a yacht? I can’t imagine Fast Five taking the time for such a great throwaway bit.

Maybe decrying a movie with “fast” in the title for being too fast makes me a philistine. Sue me. At least Dwayne “The Rock” Johnson finally makes his F&F franchise debut. I remember that part. I like The Rock.

PW and VD levitate their way out of a 1963 Chevrolet Corvette Grand Sport after driving off a cliff (rad). Then there’s the 2010 Dodge Charger SRT-8 LX: given a good chain and a heavy object, two of these can apparently level a city.

What I learned about cars: Regular cars work fine for off-roading.

So you bought a Jeep or a dune buggy or a pickup with huge tires to do some off-road driving? You chump. Turns out your average muscle-car or Hyundai Elantra can tear-ass across the desert at full speed without getting a scratch. Go get your dumb money back.

To the surprise of absolutely no one who has ever seen a movie or turned on a television, Michelle Rodriguez didn’t really die in Fast & Furious. Turns out she just had amnesia.

Coincidentally, so do I. The plot conceit here, about her work for a globetrotting villain, might be sophisticated and nuanced. I didn’t really digest it. Maybe I was too busy imagining the whole yell-to-drive-faster thing working out for my next drive to HEB.

I went Googling for more info on the cars of Fast & Furious 6, and I ended up at Maxim. Because of course. The site describes the villain’s cuckoo-bananas getaway car thusly:

Essentially a Formula 1-type chassis with a large metal plate where the windshield should be, it allows the driver to both outrun their pursuers as well as destroy anyone fast, and foolish, enough to keep pace. You also have to love the sound of that sequential gearbox revving to the limit.

What I learned about cars: What a single car cannot accomplish, many cars working together can get done.

Just as we once fantasized about filling a garage floor to ceiling with Apple IIs to reach the power of a single Pentium, F&F6 shows that, with enough sports cars working together, you can take down a tank or a jumbo jet.