Where to Find Chonk Stomp And How to Beat it 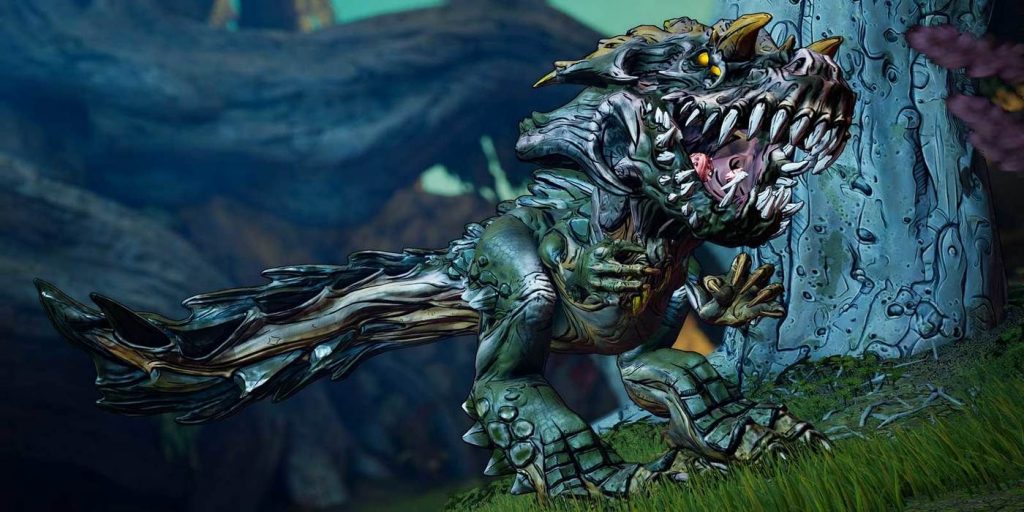 Borderlands 3 fans looking to complete all of Hammerlock’s Hunts will need to take on Chonk Stomp eventually, and he is only found in one place.

Borderlands 3 offers several different mini bosses to do battle against, and many of the stronger creatures are dealt with via Sir Hammerlock’s Legendary Hunts. One of the more memorable Hammerlock Hunts in Borderlands 3 is the one tied to Chonk Stomp.

Standing out due to its T-Rex-like appearance, the large Tyrant can only be found in one spot. Before setting off to kill the beast, Borderlands 3 fans looking to take him down easily should bring along their highest damage weapons. With the creature being flesh-based as well, gamers should prioritize guns with incendiary status effects, too. Once the loadout is set, players can make a quick trip to Chonk Stomp’s arena.

Borderlands 3 players can find Chonk Stomp on Eden 6. Specifically, he is found in the massive Floodmoor Basin area. He is also a far distance from the original fast travel point, as gamers will find the enemy on the other side of the map from where they first spawn. As such, getting a vehicle should be a priority, as the trip would be painful otherwise. Fast traveling to one of the other two points would help as well, and players should have both unlocked after beating the main story of Borderlands 3.

Gamers will then want to head to the area pictured above, and they can take either the left or right path to get there. Smaller creatures indigenous to Eden 6, such as Jabbers and smaller Saurians, will likely get in players’ way as they head toward the area. However, players can make short work of these foes, especially if they use some of Borderlands 3‘s legendary weapons. Eventually, players will reach an area marked by some large bones. After heading down the path ahead, players will reach a small cave with the massive Tyrant inside (marked with parentheses on the map above).

Much like with other Borderlands 3 enemies, players will want to prioritize landing critical hits. With Tyrants like Chonk Stomp having massive heads, this should be a simple task, meaning that players should use their strongest guns.

Accuracy will not be an issue here, so pumping round of a shotgun, launcher, or assault rifle into the monster’s head will do wonders. Lighting Chonk Stomp aflame will also help players whittle down his beefy health bar. Provided gamers keep their distance when they see him moving, his attacks should not be too tough to dodge, and the big tree in the arena can be used to help avoid Chonk Stomp’s stomps, bites, and tail whips.

Once Chonk Stomp is dead, there is a high likelihood he will drop The Garcia. While the gun can be obtained via world drops, the Golden Chest, or the new Diamond Armory, this is the most reliable way of obtaining it.

A legendary Jakobs shotgun, The Garcia boasts a massive 20 round magazine. While its damage is only moderate so that the gun remains balanced, one of its big benefits is how it lifts enemies in the air and allows them to be juggled. Like other Jakobs guns, critical hits allow the bullets to ricochet. Still, while the gun is decent, the real highlight is the fun encounter with Chonk Stomp.