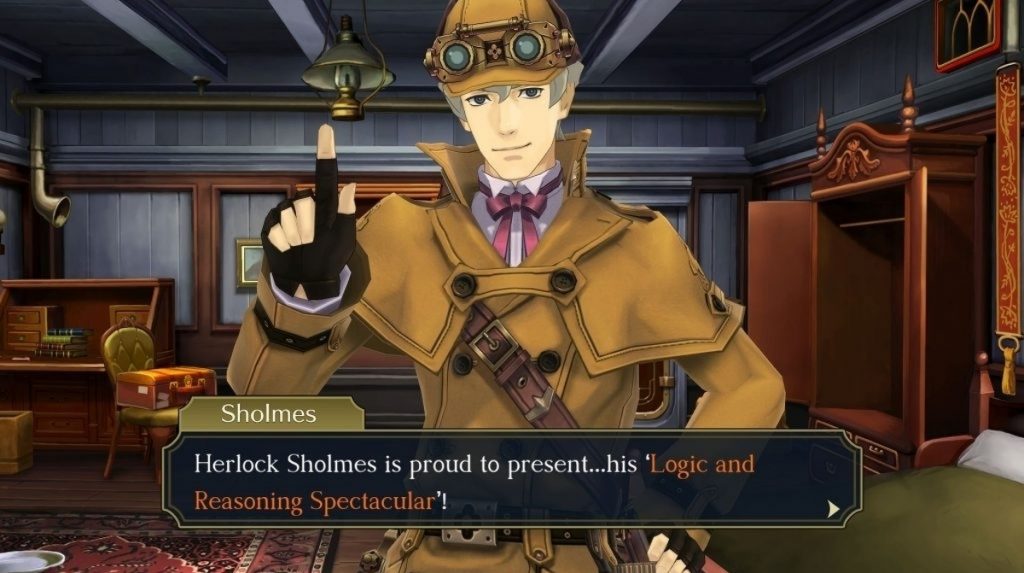 This week, Capcom announced The Great Ace Attorney Chronicles is finally headed west – but the game comes with a puzzling difference.

The Great Ace Attorney games are a spin-off series set in the late 1800s (Japan’s Meiji Period and Britain’s Victorian era). They star Ryūnosuke Naruhodō, an English student at Teito Yūmei University and an ancestor of primary Ace Attorney series protagonist Phoenix Wright. Ryūnosuke travels to England and meets up with Sherlock Holmes – in the Japanese version.

But in the version we’ll get to play on these shores, Sherlock Holmes is renamed Herlock Sholmes.

“This energetic detective is one of the best in his field, if not a bit, shall we say, over-eager to deduce the true nature of crime scenes and evidence placed before him. His eye for detail can’t be ignored despite his outlandish personality, but it’ll be up to you (and Ryunosuke) to make sense of his wild deductions. Not to be outdone, however, child prodigy and young author Iris Wilson is always willing to lend her expertise to any scenario.”

So, why rename Sherlock Holmes to Herlock Sholmes? Sherlock Holmes creator Sir Arthur Conan Doyle died in 1930, and the majority of his writing is now in the public domain. However, 10 of his stories about Sherlock Holmes remain under copyright in the US (in the UK, where copyright lasts for 70 years after an author’s death, all Holmes stories are out of copyright).

Because of these 10 stories that remain under copyright in the US, the use of Sherlock Holmes is tricky when it comes to anything released in the west – and Doyle’s estate seems particularly trigger-happy.

The lawsuit argued Doyle created “significant new character traits for Holmes and Watson” in the stories still under copyright in the US, which were written between 1923 and 1927.

Holmes is of course famous for being aloof and unemotional, and that is how he was depicted by Doyle initially. But when the author lost his son during the first world war, and his brother four months later, Holmes “became capable of friendship. He could express emotion. He began to respect women”, Doyle’s estate said.

And so the Holmes in Enola Holmes, Doyle’s estate argued, made “extensive use” of the copyrighted stories in which Holmes shows genuine human emotion.

Essentially, you can’t have a Sherlock Holmes who expresses emotions.

As mentioned, Doyle’s estate agreed to dismiss the lawsuit, but most believe it was probably settled. And so we come to the western launch of The Great Ace Attorney Chronicles, which is due out 27th July on Nintendo Switch, PlayStation 4 and PC via Steam. Capcom, no doubt wanting to avoid any legal trouble from Doyle’s estate, went with the Herlock Sholmes name. Just to be safe.

The Herlock Sholmes name was conceived by French author Maurice Leblanc, who in the early 1900s penned stories starring the fictional gentleman thief and detective Arsène Lupin. Leblanc introduced Sherlock Holmes to Lupin in a short story released in 1906, but after legal objections from Doyle the name was changed to Herlock Sholmes.

From 1st January 2023, all the Holmes stories will be in the public domain in the US. From then, anyone can depict the detective in any way they like in whatever medium they choose.

For the next couple of years, however, Herlock Sholmes is on the case!