Wraith Questions Bangalore Over Her Heirloom in New Video 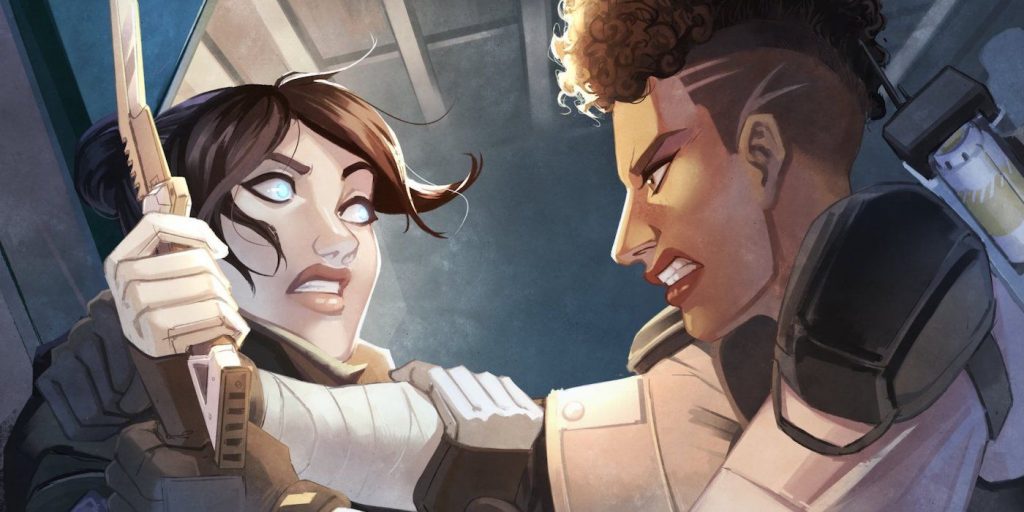 A new story video releases for Apex Legends in which Wraith discovers Bangalore’s heirloom is a pilot’s knife, raising some questions.

An unlikely rift has opened up between two of Apex Legends most level-headed characters in a new video released by developer Respawn Entertainment, in collaboration with a prominent artist from the Apex Legends fan community.

This isn’t the first time Respawn has partnered with members of its fan community for story content. Last year, artist Fragment depicted the fight between Loba and Revenant after she revealed what happened to Revenant’s source code; an endcap of sorts to the Season 5 Quest storyline.

In the new video illustrated by artist VonHollde, the legends are gearing up in the dropship for what looks to be a Duos match. Bangalore asks Wraith to grab the jump jets from her locker, but Wraith instead comes back with Bangalore’s Heirloom, which is a pilot’s knife she took from someone else. Pilots operated the titan mechs seen in both Titanfall 1 and 2, though they were also used for non-combat purposes like farming, construction, and research. Pilots often were equipped with a knife, usually a Data Knife, which is capable of hacking computers and stealing intel.

Bangalore insists that her knife is not a data knife, but Wraith asks if she can check it, since Wraith was a Senior Science Pilot in the ARES Division of the IMC before they experimented on her. Bangalore tackles Wraith into a locker, refusing to let Wraith have the knife.

Bangalore tells Wraith, “You are not taking anything else from me,” seemingly lumping Wraith in with the rest of ARES Division whose experiments made them a target of the Militia. This, in turn, indirectly led to the deaths of many of Bangalore’s IMC-serving family members. Wraith insists she only wants to see if she can find out anything about her past and maybe what happened to Bangalore’s M.I.A. brother, Jackson, from the data that could be on her knife. Bangalore demands Wraith drop the subject and jumps out of the dropship.

Bangalore has also tied a string of bottle caps to the knife. The Williams family have a tradition where the family has one last drink together before one of them is deployed to war, and the one being deployed is sent off with the bottle caps as a memento. Clearly it is more than just a knife to Bangalore, but who she got it from remains a mystery.

It will be interesting to see what happens next between the two characters. The current Season 9 comic seems to be focusing on Bloodhound, Fuse, and Lifeline, but Apex Legends is getting its first-ever physical comic from Dark Horse starting on June 2. That story will last four issues, and judging by the first cover, it’s hard to say if the comic will involve Bangalore or Wraith.

Apex Legends is available now on PC, PS4, Switch, and Xbox One.

Outriders: Is There Romance?