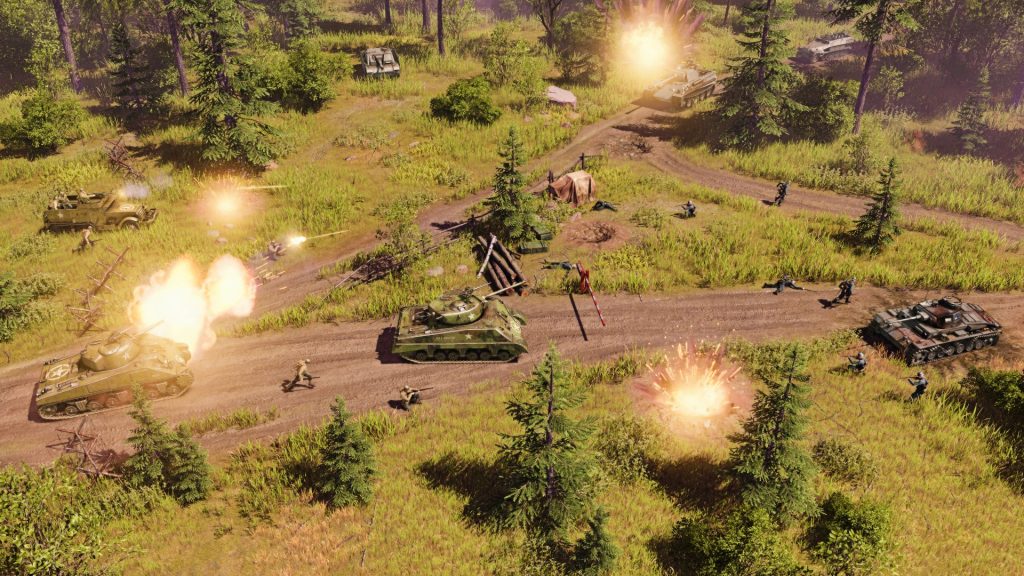 If you’re excited about the prospect of WW2 strategy game Company of Heroes making a comeback, we’ve got some excellent news. CoH’s scrappy, Eastern European cousin Men of War is staging a return of its own. Russian publisher 1C Entertainment has announced today that it’s officially making Men of War II, in partnership with Ukranian developer Best Way.

This tactical RTS game will draw a line under a decade of (slightly convoluted) Men of War development and start anew with a brand-new entry. Headline features include an updated engine, better graphics, a frontline system, and better mod support. While Men of War games have a strong multiplayer culture, the series also gives a good single-player romp, which makes a return here with two fully fleshed-out campaigns.

For the WW2 enthusiasts among you, Men of War II will also feature one of the most “detailed and accurate” rosters of WW2 hardware, with 45 historically accurate vehicles and 45 battalions. It’s easy to get lost in comparing Men of War to Company of Heroes – both are fundamentally tactical RTS WW2 games after all. The key difference, though, is that Men of War forgoes base building to focus on the action.

Men of War has always skirted the line between chaotic-yet-manageable combat and old school RTS design where function often gets the better of form. Hopefully Men of War II manages this balance better than the series has done historically. There is also something incredibly freeing about not having to worry about a base, and I look forward to playing a modern version of the Men of War premise.

The new frontline mechanic is comparable to a similar mechanic that features in Eugen System’s Steel Division series. I imagine it will be just as divisive with the Men of War community as it was with Wargame fans. On paper at least it seems to be well thought out, with different interactions between what’s considered ‘your’ territory and what’s considered your opponents.

Of more interest are the implications of this new shift to a visualised frontline system. Specific capture points are gone for now, although modes exist where there are capture ‘zones’. The goal here is to push the frontline so that your half completely covers these zones, which does sound like it could be a fun twist on a staple objective type.

There is also the fact that, historically, the AI in Men of War could only really function within the context of having fixed points on the map to capture. Removing these means the studio has had to really level up its AI design. “We could talk about our new fierce AI for hours,” development lead Maxim Kamensky tells us, “but let’s look at the big picture: it’s better, more intelligent, and more complex than previous versions.”

I’m also excited about the game’s dynamic campaign, something that wasn’t mentioned during the reveal session but was confirmed to us via a follow-up interview.

“The Men of War series has always been about taking command, making the right decisions, and forging your path to victory,” Kamensky says. “So, we will add a dynamic campaign — another side of the war and another mode not related to the main storyline.

“It’s accompanied by more extensive, turn-based campaigns where you manage and set your battalions up for real-time accurate historical battles… by developing and upgrading your army and its skills, you will be facing a more severe enemy in each new battle. This new dynamic campaign has been designed for a super replayable single-player experience.”

There are plenty more details to revel in as well – such as battalion creation, 5v5 player battles, direct control making a return, custom lobbies, and matchmaking support for multiplayer.

The developers also claim Men of War II will feature the biggest multiplayer and co-op modes in the series’ history, with the campaigns available to play in co-op with up to five players. While you’d be forgiven for thinking this is all a bit niche, the news of a Men of War sequel is exciting. The series deserves to stand shoulder-to-shoulder with the likes of Company of Heroes and will help further the RTS renaissance we all seem to be enjoying right now.

From what we’ve seen so far, 1C and Best Way are making every effort to give this obscure series a big push to conquer a wider strategy audience. Men of War II is scheduled to come to PC via Steam sometime in 2022.