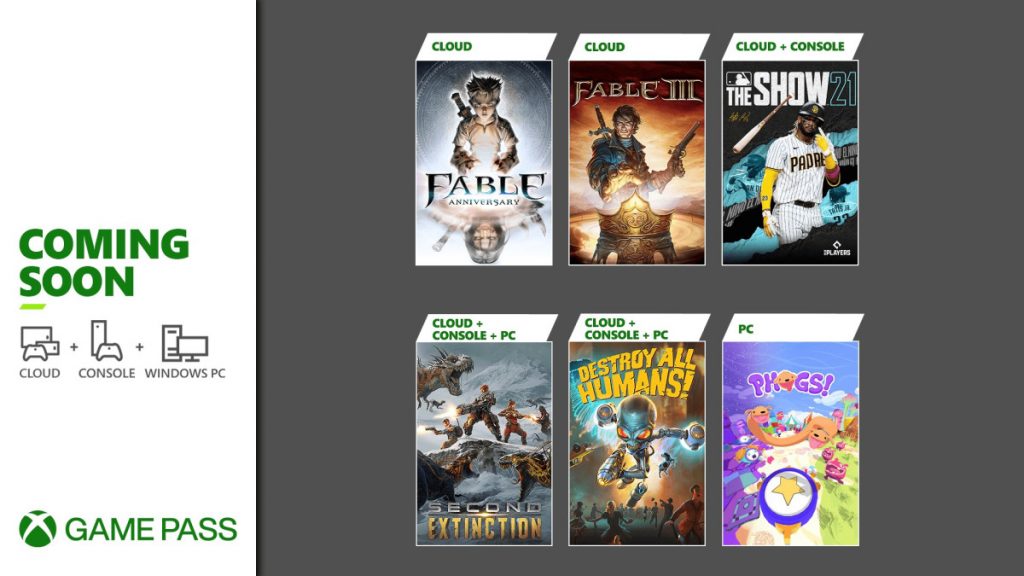 Xbox has recently announced the final round of games that are being added to Xbox Game Pass this April. The titles include two Fable games, an alien invasion tale, some good ol’ baseball, and a dinosaur game. All of the games are available in the final week of April.

One of the biggest games coming to the service is MLB The Show 21, the latest in a series that, until very recently, was PlayStation-exclusive. The Show 21 is available now for all Game Pass subscribers. Another game currently available is an indie game called Phogs! In that game, you control two dogs linked together by a stretchy belly, which sounds very “indie,” doesn’t it? Swinging hard to the other end of the spectrum from cutesy dogs is Second Extinction, a game in which you and two co-op partners must keep a resurgent horde of dinos at bay.

The version of Destroy All Humans! being offered is the remake of the original game that came out last year. Similarly, the Fable Anniversary is the remaster of the original game so we’re getting a remake and a remaster in one batch. Coming on the same day as Fable Anniversary is Fable III, meaning you’ll have all the fantasy RPG you can handle starting the last day in April.

The games leaving Game Pass include Endless Legends, For the King, Fractured Minds, Levelhead, Moving Out, and Thumper. I’m noticing a trend of the games that leave Xbox Game Pass now being ones I’ve never heard of. I wonder whether player engagement is the reason behind their leaving, rather than any kind of licensing. In any case, all of the games are leaving Game Pass on April 30, so if you’re playing any of them, you still have time to get your achievements.