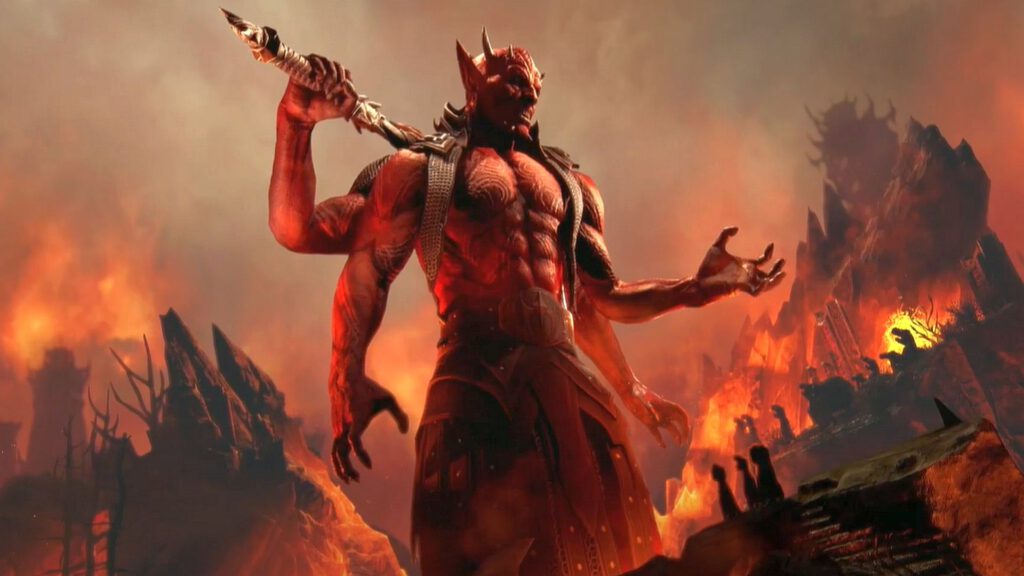 When The Gates of Oblivion was revealed as The Elder Scrolls Online’s next year-long adventure, certain questions no doubt leapt to the minds of many of the online RPG game’s fans. Like, “Tiber Septim’s beard! Was that Mehrunes Dagon?”, “Is that fiery hellscape The Deadlands from TES IV?”, and, “Will an Oblivion gate spewing forth Daedra swallow me up and send me there?” To find out, we spoke to creative director Rich Lambert ahead of the expansion’s launch.

“You will go to The Deadlands in the chapter,” he tells us. “You will go to pockets of it, though. And then in the fourth quarter in that story DLC we always do to wrap up the year, you’re going to spend a lot of time in The Deadlands exploring [Mehrunes Dagons’] realm. This year’s story is all about him.”

While we won’t see the same gateways into The Deadlands that were peppered across TES IV’s valleys popping up in TESO’s own Tamriel, we will be faced with an equally worrisome alternative: Oblivion portals. “In our timeline, Mehrunes Dagon hasn’t quite figured out the science, if you will, to the Oblivion gates,” Lambert tells us. “We’re 800 years in the past.

“But, we do have a new form of Dark Anchor gameplay that we’re calling Oblivion portals. So, portals will kind of appear; they will be akin to the Dark Anchors. You click on a portal, though, and you actually go to The Deadlands and you do a thing there, and then you come back. Which is really cool, really exciting.

Because TESO’s adventure is set all these years earlier in The Elder Scrolls’ timeline, Lambert explains, “it feels different” to what’s come before. “It is very different than what you could expect with Oblivion,” he tells us, “but we’ve still got that same sense of nostalgia that we’ve had in previous years. So, The Deadlands will feel iconic – it’s that craggy hellscape.”

Additionally, Lambert tells us that Bethesda’s TES IV’s Deadlands are “definitely a huge inspiration” for TESO’s version. “Obviously, we can’t completely change what it looks like,” he says. “There’s this iconic look and feel to it. But, like we always do, we have multiple biomes to help make it easier for the players to explore the world.

Mehrunes Dagon is back! This Daedric Prince is up to no good (again.) What is his plan this time? pic.twitter.com/F4Jb0hChxu

The Gates of Oblivion launches with the Flames of Ambition DLC on March 8 and Blackwood chapter on June 1.