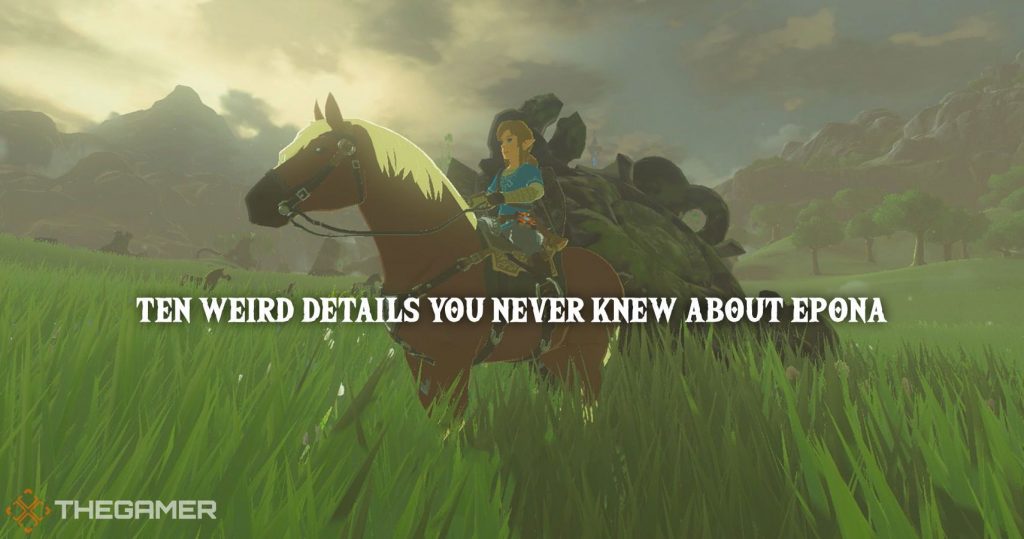 Epona hasn’t actually appeared in as many games as one might think, but that doesn’t mean there isn’t a few hidden bits of trivia about her.

The Legend of Zelda is a long-running series that has tons of recognizable characters. These characters have appeared in many games over the past few decades, making them a part of a countless number of childhoods. One of the best-known characters is Epona — Link’s faithful horse that helps him traverse the vast land of Hyrule. Epona is often pictured alongside Link in popular art from the series and even assists him in Hyrule Warriors as a DLC “weapon.”

Related: Zelda: Every Shield Link Has Wielded In The Series, Ranked

She is one of the most well-known horses in gaming and a character that can easily be identified by Nintendo fans around the world.

10 Epona Can Speak in Minish Cap

While Epona may not assist Link with his mission in the Minish Cap, she still makes an appearance. In the game, Epona is actually helping to sell Lon Lon Milk and pulls a cart around. While Link is in his Minish Form, he can go up to Epona and talk with her, although she mostly just complains about her work.

Epona is also a character that Link can fuse Kinstones with.

9 Epona Can Die in Breath of the Wild

On a much sadder note, Epona can actually die in Breath of the Wild, much like the rest of the game’s horses. Epona can be summoned into the game only by scanning the Twilight Princess Link amiibo. Luckily she can be revived in-game by Malanya as long as she is registered.

Players can also use the amiibo to summon a second Epona into the game to replace the first one.

Epona isn’t the friendliest of horses canonically and doesn’t seem to take a liking to many people. In Ocarina of Time, she can only be ridden by Malon and Link. Epona is described as a wild horse, which helps delay her from being gifted to Ganon after he takes over Hyrule.

This point is also proven in Majora’s Mask when Skull Kid takes Epona but releases her shortly afterward.

7 Epona Can Communicate With Wolf Link

Twilight Princess is a popular game due to its unique theme and the introduction of the Twilight realm. While Link is in his wolf form, he can actually communicate with animals, including Epona. The dialogue from Epona seems to encourage Link as she mentions him being able to ride her again.

This is vastly different from the complaining Epona players see in The Minish Cap.

6 Epona is an Animal Crossing Villager

Animal Crossing: New Leaf was one of the first games to use amiibos. By scanning in the Link Rider, Ocarina of Time Link, Majora’s Mask Link, or Sheik amiibo, players can unlock Epona in their game. She will arrive at the campsite but can be convinced to move into the player’s town. She has a peppy personality and decorates her home like a field.

She comes with a special outfit, and her in-game skill is galloping as a reference to the Zelda games.

Epona went through a bit of a change during Ocarina of Time’s development. Initially, Link would hit Epona with a whip when he wanted her to go faster. After hitting her, he was supposed to give her a carrot as a reward; thus, the character stamina meter system was born.

The whip was left out of the official release, and instead, Link smacks Epona’s side.

While it may seem like Link and Epona are always around each other, Link doesn’t exactly own Epona in most games. In Ocarina of Time, Epona is actually Marlon’s horse and is shown with her at the end. The same is true in Twilight Princess, where a character named Ilia takes care of Epona.

Related: The Legend of Zelda: 10 Weird Facts You Didn’t Know About Koroks

The only game where Link has confirmed ownership of Epona is in Breath of the Wild.

3 She Originally Planned for Mario 64

Epona wasn’t originally going to be a Zelda character; in fact, at first she wasn’t even going to be in the same genre. The original plan was to put a horse in Mario 64, but the team couldn’t figure out a way to properly introduce Epona into the game by the time of release.

This all changed when Ocarina of Time began development and Epona was moved to the Zelda project.

2 She is Possibly The Only Mare in Zelda

While this is highly unlikely, it is an interesting fact about the world of Zelda. In the games, there is no proof or mention of other female horses outside of Epona. This has been noted by dedicated fans, although it’s highly likely that there are other female horses in Hyrule.

It’s interesting that the developers never thought to introduce another mare in the series.

1 Epona Has Only Been in Five Zelda Titles

Despite being a prominent piece of the Zelda universe, Epona has only been in five mainline games. Epona didn’t appear until Ocarina of Time in 1998 and was replaced by the King of Reds Lions as Link’s transport in Wind Waker before making her return in Twilight Princess in 2006.

She wasn’t originally included in Breath of the Wild and has been left out of most handheld titles, excluding The Minish Cap.

Next: The Legend Of Zelda: 10 Things You Never Realized About Deku Scrubs

Jess has been writing for clients all around the world for years. From companies in Japan to being featured on The Kim Komando Show, Jess has prided herself in expressing her love for gaming. Her favorite console is the Nintendo 64 and she revels in replaying through Paper Mario and Megaman Legends. When not fighting Reaverbots she can be found gushing over the newest JRPGs or watching seasonal anime with her furless cat Noko.